If you do nothing else in London between now and 11 October, make sure you go to this lovely exhibition at the Queen’s Gallery in London. This is my opinion, at any rate: that of Richard Dorment in Friday’s Telegraph is somewhat different. I can’t decide whether I fall into his category of someone who ‘already know something about these subjects’ (flattering!) or of those ‘who hang on every word Alan Titchmarsh says, who wait excitedly for “Gardener’s Question Time” and loved the much missed TV shows “Front Gardens” and its sequel “More Front Gardens”’ (insulting?).

Mr Dorment finds the show ‘unfocused’, on the not unreasonable ground that ‘[T]he subject is simply too vast and multi-faceted to be encompassed in a show drawn from a single source, even one as stupendous as the Royal Collection’, but he also states that he is one of those ‘who feel drowsy when we breathe fresh air’. (I charitably assume that the second half of this statement in the online version of his piece was garbled in the editing, not in the writing.) Therefore this exhibition is for those of us who like gawping at beautiful and interesting things, and not for urban London sophisticates, but I don’t believe there’s any harm in that.

(The accompanying book (much more than just a catalogue), by the way, is beautifully produced, and a hardback bargain at £29.95 considering its considerably extended content and colour illustrations. I’ve noticed that an increasing number of high-end art books are printed in Slovenia, these days: who knew?)

The exhibits (paintings, prints, porcelain, jewellery, other stuff) are categorised chronologically: Paradise (Persian and Indian miniature paintings, referring back to Xenophon’s coinage/transliteration of the word ‘paradeisos’ for an enclosed pleasure garden); the Sacred Garden (the biblical Paradise, and the concept of the Virgin Mary, herself a hortus conclusus, inside a garden); The Renaissance Garden; The Baroque Garden; The Botanic Garden; The Landscape Garden; The Horticultural Garden; The Garden Inside (porcelain, embroideries, etc.); and The Language of Flowers (a decoding of this rather clumsy Victorian method of coy/flirtatious communication).

Top prize for the most bizarre exhibit has to go to Queen Victoria’s fuchsia earrings: peer closely enough and you realise that the white inner bells of the flowers are made from little teeth: the milk teeth of her babies, apparently. To me, the other really bizarre thing is close by: a domestic scene by Landseer of Prince Albert, home from a day’s shooting, at a window, with a view of a formal garden (which Dorment justly categorises as ‘municipal park’ – would that municipal parks were maintained to that standard today!). The audio commentary describes the view, and the posy of flowers which Queen Victoria offers her husband to welcome him home, but says nothing about the really grotesque aspect of the scene – Albert has brought part of his day’s bag into the window niche, and laid it out on the dainty silken furniture. As well as the two bloodstained game birds, he has also apparently shot a kingfisher, which the toddler Princess Vicky is examining enthusiastically: Landseer’s skill captures brilliantly the droop of the dead bird’s neck. 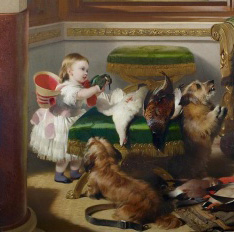 The infant Princess Royal examining a kingfisher, presumably killed by her father

Rather more gentle artworks are on display in the section called ‘The Botanic Garden’. This was the first age of discovery of new and exotic plants in America, Africa and Asia, and artists all over Europe rose to the challenge of depicting previously unfamiliar species. The exhibition has examples of the work of two female Dutch artists, Maria van Oosterwyck (1630–93) and the doughty Maria Sibylla Merian (1647–1717), who, extraordinarily for a woman of her time, not only worked as a professional botanical artist and teacher, but was sent by the Amsterdam city corporation to examine and depict the wildlife of the Dutch East Indian colonies. 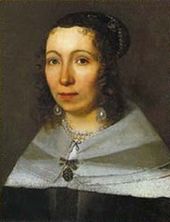 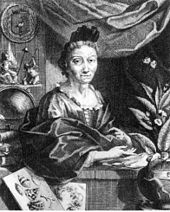 Maria Sibylla in later life, surrounded by her works

One of Merian’s most famous botanical images from Suriname was of a pineapple, which at the time the different royal gardeners in Europe were vying to produce in their own glass-houses. (It was intriguing to read that the pineapple in the famous pictures – several versions exist – of Charles II being presented with a fruit was probably an import rather than the example of his gardener’s skill.) 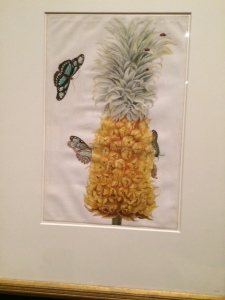 The pineapple, with appropriate insects and butterflies

I had not previously come across the work of Alexander Marshal (c. 1620–82), a friend of the Tradescants, who produced a florilegium of their introductions for them as well as making another collections for himself, which entered the Royal Collection in the reign of George IV. This sheet of his stunning images depicts (appropriately) tradescantias, as well as nigellas (also a then recent import) as well as roses. 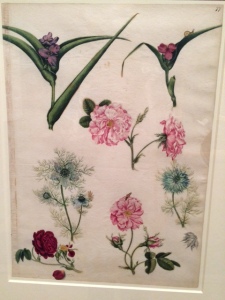 A sheet from Marshal’s florilegium

In terms of royal gardeners, the stars of the show are undoubtedly William and Mary, followed by Frederick, Prince of Wales (as in ‘Here lies poor Fred who was alive and is dead …’), and his wife Augusta, the parents of George III. As well as the transformation of the gardens at Hampton Court, William and Mary brought with them from Holland the extraordinary Delft ceramic flower holders intended to show individual flowers, but (to modern taste) so highly ornamented – in one case mostly with praise of William – that they clash with the contents. 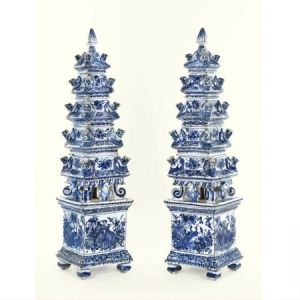 A pair of Delft single flower-vases, similar in style to those in the Royal Collection

‘Poor Fred’ began the royal association with Kew, developing both the palace and the gardens there, and his widow spent a lot of time in the so-called ‘Dutch house’, which later became the informal country residence of George III and his family, before he decided/was persuaded by Sir Joseph Banks to develop the gardens into a botanical nursery/laboratory for the investigation of the useful as well as decorative plants from Britain’s overseas possessions. Worrying that this world centre of excellence is at risk from ‘rationalisation’, i.e. budget cuts…

Back at the exhibition, there is a great deal more to see, from late eighteenth-century prints of royal and other gardens which helped spread the taste for ‘natural’ landscaping to the jewel ‘flowers’ which Fabergé sent on spec to Princess (later Queen) Alexandra. Of course the whole story of the development of European gardening cannot be encompassed in one exhibition, but the fascinating items displayed here make a very good start.

Like Loading...
This entry was posted in Uncategorized and tagged Kew Gardens, Painting Paradise, Royal Collection. Bookmark the permalink.