On the 13th floor of the Arts Tower at the University of Sheffield, you will find the Department of Landscape, the most important such institution in the world, containing such luminaries as Professor Nigel Dunnett , currently helping the RHS to ‘green grey Britain’ (and whose meadow planting was such a brilliant feature of the London Olympic Park), and at which Piet Oudolf is currently a visiting professor.

There is a choice, in ascending the tower, of conventional lifts or two of those terrifying paternoster affairs which were such a popular element of high-rise buildings a few decades ago: I’ve just found that it features in a YouTube clip here. (You will not be surprised to learn that I took the conventional (cowardly) option.)

Views from the 13th floor …

Is the bridge in the park below inspired by China?

My destination was a conference on ‘New Approaches in Chinese Garden History’, to which I had been generously invited in my famous role as a completely ignorant amateur, and which was a most enjoyable day of talks and discussion on topics ranging from recent developments in the field to studies of individual gardens and the enthusiasm for the ‘Chinese’ gardening in the West.

I wouldn’t presume to summarise the proceedings, but I found out lots of lovely new Stuff. For example Professor Georges Métaillié, the author of the eagerly awaited next volume of Science and Civilisation in China, discussed the taste of two scholar-gardeners and self-confessed ‘plant addicts’ (yes, there is a Chinese word for it!) in the mid-seventeenth century, their plants, and their skills in cultivation. (I later asked Professor Métaillié if Chinese horticulturalists had discovered the sexual reproduction of plants, and hence the possibilities of hybridism, earlier than Thomas Fairchild and other Western pioneers, but apparently they did not: they were keenly aware of natural mutations, but spread any desirable new varieties that emerged by vegetable propagation – of which their techniques were superb.)

Another fascinating topic was the nature of a ‘grove’ – the closest Chinese word has as loose a definition (with regard to size, natural or cultivated, all one species or mixed) as the English, but it was noted in passing that a grove of mulberries adequate to supply the leaves for one silk-producing household was about 50 trees. (Alas for the solitary white mulberry at CUBG!) 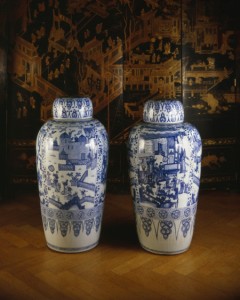 The importance of rockwork (of course a cliché of European ‘Chinese’ gardening) was described, and there was a beautifully illustrated talk on the effect of, firstly, genuine Chinese artefacts (porcelain, silks, lacqueur wares, wallpaper (above)); then ‘export wares’ designed to appeal to the Western market; then the ‘chinoiserie’ manufactured in Europe, down to the ‘willow-pattern’ china, fragments of which must surely appear in every cubic metre of urban soil in the country, on British taste.

I had always assumed that the long-necked bird which appears on so many wallpapers and ceramics was a crane or an egret: but it is in fact called the ho-ho bird. 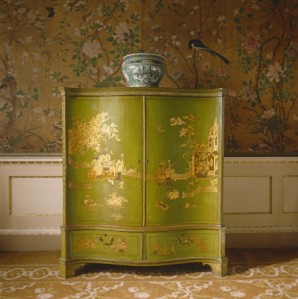 The pagoda appear so frequently in export wares that it was assumed that all Chinese gardens had one: hence the famous example at Kew, and the unfortunate one constructed in Hyde Park for the (slightly premature) peace celebrations of 1814, which ominously caught fire and burnt down, killing a workman, during the fireworks. 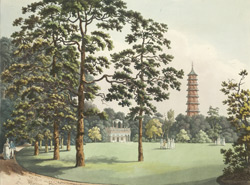 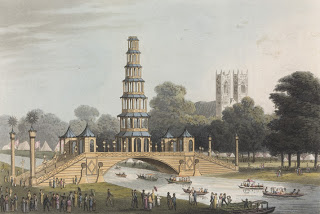 The Hyde Park Chinese bridge and pagoda, before the conflagration.

I had not known that Sir William Chambers had first-hand experience of Chinese architecture – or indeed that he had been brought up in Sweden and trained as an architect in France: in fact, he went to China as a trader for the Swedish East India Company. Sir George Thomas Staunton (who learnt Chinese as a boy, and, though merely a page, was the only person on Macartney’s embassy who could speak the language), built a Chinese garden at Leigh Park, close to Portsmouth, though not much of it seems to have survived.

The Chinese bridge over the lake at Leigh Park.

I was excited to hear of research on the gardens in Canton (Guangzhou) built by Chinese merchants who prospered massively by acting as middlemen between Chinese producers inland and the European traders who could negotiate only at the port. The garden of the multi-millionaire Howqua (estimated as the richest man in the world, with 15–25 million dollars, in the 1830s) is long gone, but there are accounts of it, and even tantalising sketches, in the published works of Western visitors, including Robert Fortune, whose works got me interested in this whole area in the first place. 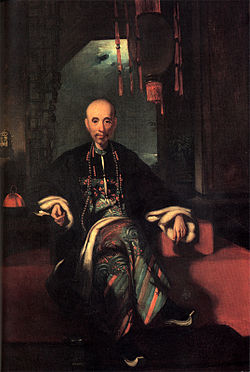 ‘Howqua’ was the name bestowed by Europeans on Wu Bingjian (and his father Wu Guorong) because they couldn’t pronounce his name (Mr Chitqua was a similar case). He gave one-third of the 3 million dollars of ‘compensation’ China was forced to pay to Britain after the First Opium War, but his trading status was undermined by the Treaty of Nanking, which opened other ports to trade, and after his death in 1843, his family’s fortunes sank. Ironic to think that the decline of his famous garden overlapped with the rise of James Bateman’s extraordinary ‘Chinese’ vision at Biddulph Grange in Staffordshire (which some participants at the conference had visited on Thursday).

This was a small but perfectly formed conference, full of friendly, knowledgeable and enthusiastic people: I have to thank the organisers of the conference, and especially Josepha Richards, for inviting a complete ignoramus to such an inspiring day!

Like Loading...
This entry was posted in Uncategorized and tagged Chinese gardens, chinoiserie, Science and Civilisation in China, University of Sheffield. Bookmark the permalink.

2 Responses to Botany South and North: The Saga Concludes!