A Man and a Brother?

I very much enjoyed the recent two-part BBC series by David Olusoga on ‘Britain’s Forgotten Slave Owners’, especially when it focussed not on the well-known and fabulously wealthy families – Drax, Codrington, Lascelles – but on the little old ladies in genteel poverty with one slave, thousands of miles away, as their only significant asset. 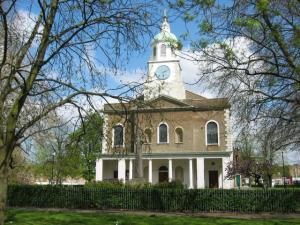 The church of Holy Trinity, Clapham. 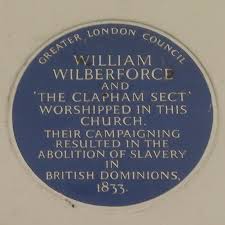 The blue plaque on the church, commemorating the ‘Clapham sect’. 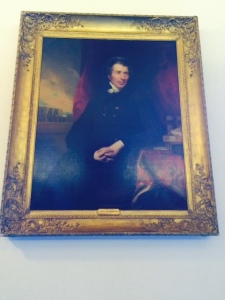 To me, one of the most remarkable facts in the programme was that one of the worshippers at Holy Trinity, Clapham (vicar, John Venn), along with William Wilberforce, Lord Teignmouth, Zachary Macaulay (father of the historian), James Stephen, and others of the so-called ‘Clapham sect’ of anti-slavery campaigners, was George Hibbert, an educated and civilised man, director of the West India Dock Company (Si monumentum requiris, go to the Museum of London Docklands, or one of the nearby restaurants). 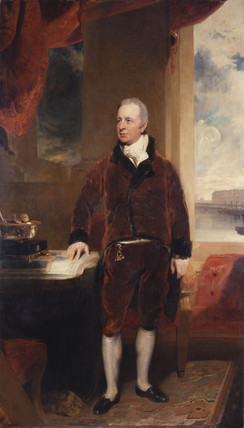 George Hibbert, by Sir Thomas Lawrence (1811). The portrait was commissioned for the boardroom of the West India Dock Company. (Credit: Museum of London)

Hibbert (1757–1837) was (from the ODNB) ‘a renowned collector of paintings, sculpture, and books, and at his house in Clapham he brought together a unique collection of botanical exotica. … In 1811 he was elected a fellow of the Royal Society and, the following year, a fellow of the Society of Arts. In 1819, as a member of the Roxburghe Club, he edited Caxton’s translation of Ovid, Six Books of Metamorphoses’ (using Samuel Pepys’ manuscript at Magdalene College, Cambridge). When he sold his collection of prints in 1809, Viscount Fitzwilliam was a keen purchaser, and so the Fitzwilliam Museum in Cambridge now contains some of Hibbert’s possessions. He also acquired and traded paintings, and held several sales, most notably in 1829, when he retired to the country.

He was also a fellow of the Linnean Society – the collection of ‘heaths, Banksias, and other Cape and Botany Bay plants, in Hibbert’s garden, was most extensive, and his flower-garden one of the best round the metropolis’, according to Loudon; and his philanthropy was manifest in his assistance to the National Institution for the Preservation of Life from Shipwreck, later the RNLI, and in his founding in 1805 of the London Institution: ‘a Library, Reading-Rooms, and Lectures, for the diffusion of useful knowledge’, of which he was the president for thirty years. (The great Richard Porson was its first Librarian: he was almost dismissed for his slovenly and alcoholic ways, but died of an apoplexy while still in office.) 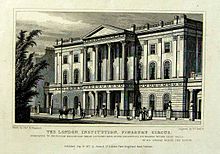 The London Institution, in its third home at Finsbury Circus, 1815. The building was demolished in 1936.

But this comfortable upper-middle-class existence was entirely funded by slavery. Hibbert’s father and grandfather were Manchester merchants, and his uncle Thomas was a significant player among the merchants and planters of Jamaica. In 1780, he joined his older brothers in their London firm, of which in the 1790s he became the director.

As the anti-slave-trade movement (supported by his fellow worshippers at Clapham) gathered even greater momentum, Hibbert was one of the most stalwart opponents of abolition. So how does a ‘civilised’ man with a humanistic education – and a Christian believer – reconcile his beliefs and his conscience with what he must have known of the terrible cruelties of the slave trade?

Hibbert’s opinions can most easily be gauged from a collection of his Parliamentary speeches, published in 1807. The Rev. Thomas Cooper, whom the Hibbert family sent out to Jamaica to proselytise among the slaves, collaborated with Macaulay in a famous pamphlet on ‘Negro Slavery’ in 1823, and published an acrimonious correspondence with Hibbert in 1824. (A short hagiographic pamphlet on Hibbert’s ‘life and character’ was produced just after his death, but the reference to the slavery controversy is so well coded as to be barely recognisable. Incidentally, he never visited the West Indies.) 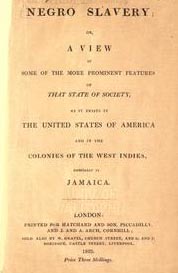 The 1823 pamphlet ‘Negro Slavery’, for which Cooper supplied eye-witness evidence.

In Parliament, Hibbert adopted the argument that slavery is sanctioned by the usage of both classical antiquity and the Old and New Testaments. Moreover, a comparison of the condition of most slaves with most employees in the mills of northern England will show that the slaves are usually much better off, not only with regard to their food and accommodation but because of their warm climate and unpolluted environment.

Moreover, slavery may be regrettable, but it is an economic necessity for the British colonies. Abolition of the slave trade will ruin the colonists of the West Indies – and consequently the web of traders, investors and merchants in Britain who do business with them – if they have to pay their former slaves wages as free men. And not only that, but France and Spain will immediately fill the gap in the market left by Britain and increase the number of their own slaves, so that overall slavery is likely to increase.

Famously, in spite of Hibbert’s efforts, the 1807 Abolition of the Slave Trade Act was passed by 283 votes to 16. Its effect was limited to the ending of the trade in slaves in the British colonies: the anti-slavery movement apparently believed that complete abolition would quickly follow, but it was not until 1833 that freedom for slaves (and subsequent compensation for their owners) was achieved. 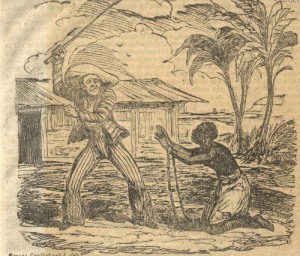 Caricaturists George Cruikshank (above) and James Gillray (below) joined the call for abolition (though Cruikshank also produced cartoons in favour of the West Indies trade). 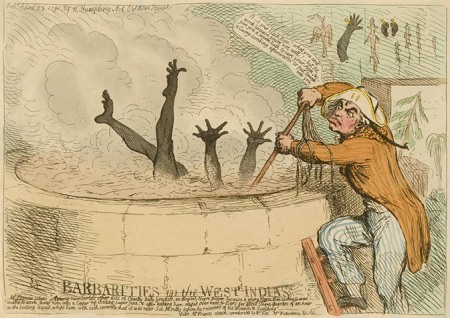 Hibbert retired from Parliament in 1812, but continued to lobby on behalf of the West Indies trade for the rest of his active life. His library (sold by auction by over 42 days between March and June 1829) was described by Robert Harding Evans in his sale catalogue as second only to the Roxburghe library: and ‘It was the aim of the Possessor, during more than forty years, that it should contain at once the Sources of General Information and Amusement, and also choice Specimens, illustrating the Origin, Progress and Perfection of the Art of Printing.’

The 8,726 items range from Martin Luther’s own copy of his German Bible via a Shakespeare First Folio to John Smeaton’s 1793 account of the building of the Eddystone lighthouse. Also among them is the Slave Law of Jamaica (1828), which sets out the various laws since 1816 affecting the treatment of slaves in Jamaica, with an impassioned (and anonymous) Preface decrying those who ‘are zealously urging measures of arbitrary interference’ in the slave-owners’ undoubted and legally sanctioned property. 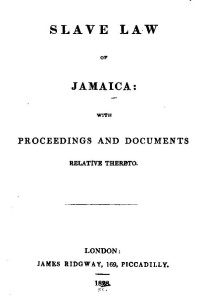 Hibbert’s correspondence with Cooper reveals a complete failure of minds to meet. When the Unitarian minister arrived in Jamaica, he told his hosts that ‘if slaves were treated as human beings and taught to read … they would thus be unfitted for continuing in the low estate of West-India slaves; that is, they would be raised from the condition of mere animals, to that of men and Christians’. The response was that reading lessons were stopped: ‘instruction was to give way to slavery, not slavery to instruction’. 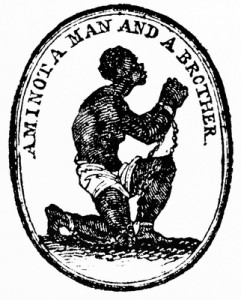 The famous ‘logo’ of the anti-slavery campaign, made into a ceramic medallion by Josiah Wedgwood.

Cooper (who with his wife was grossly libelled by the Jamaica establishment for his pains) took the absolutely simple standpoint that slavery is an evil. He even exonerates the Hibbert clan from any outstanding or even deliberate cruelty to their slaves; but whipping, chaining and branding are the norms by which the system is maintained. He is happy to see gradual abolition, and compensation paid out of British taxes to the slave-owners, but the evil must be rooted out. 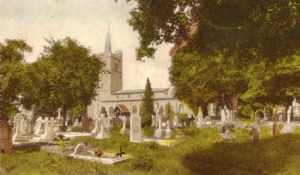 Aldenham churchyard, where George Hibbert is buried, from a 1930 postcard.

Hibbert by contrast, does not see the evil. Slaves should be well cared for and not worked to excess, but it is clear that the answer of this man (who according to his gravestone in Aldenham churchyard, Hertfordshire, showed ‘energy, ability, integrity … humility … cultivated understanding and gentle temper’) to the famous question: ‘Am I not a man and a brother?’ would be a firm ‘no’.

5 Responses to A Man and a Brother?