To survive on a bike in Cambridge, ‘Cycle City’ of the Fens, it is essential to assume that all fellow road users – drivers, pedestrians and (especially) cyclists – are rude, unpredictable, illiterate and terminally stupid. (The last of course encompasses the first three.) How else to explain the selfishness and lunacy that I witness every day? I am reluctant to designate myself as a ‘cyclist’, because this is the preferred term of a class of persons who have adopted ‘two wheels good, four wheels bad’ as their mantra to a level of narrow-mindedness that would have impressed George Orwell, and who (usually clad in Lycra, with helmet and wrap-round glasses in place and earphones in) simply ignore all traffic lights, zebra crossings and one-way streets, sweep up onto (not shared-use) pavements to dodge stationary traffic, and generally believe that the moral high ground achieved by their non-pollution of the environment gives them the right to ignore both laws and pedestrians.

There is a subgroup of cyclists, not usually Lycra-clad, who cycle with their children. This apparently gives them the automatic right to cycle along the (again, not shared-use) pavement with them, and smile benignly when one of their darlings rams into the legs of a little old lady (i.e. me); or to move incredibly slowly along the road while shouting instructions to the children as they scatter pedestrians on the pavement. And don’t get me started on the ones who entrusted their precious offspring to a plywood cart in which they can inhale all the particulates on the road at exhaust level…

A day or so ago, I happened to be sitting outside the Botanic Gardens on Hills Road for about 10 minutes: so many cyclists came up on to the pavement around the War Memorial in that time, to get round the queues at the temporary traffic lights, that I walked down to check that there wasn’t a dispensation to allow cycling on the pavement, but no, there wasn’t, just cyclists taking the high road and the high ground again. (Significant numbers of those I watched also went through the red light at the nearby pelican crossing after they had dodged back on to Hills Road again.) And you couldn’t make it up, but the ‘Weekly News’ today urges cyclists not to speed down the towpaths, after a recent ‘collision’ with a pedestrian. They are talking about putting up signs…

Cyclists speed across the pavement at the War Memorial.

What really flabbergasts me about ‘cyclists’ is that so very often, when a shared-use pavement is provided to get them out of danger on a narrow main road, they choose not to use it (except of course to swerve round stationary queues), apparently preferring to exercise their God-given right to endanger themselves – another moral-high-ground thing (some of them probably need oxygen), which actually led to a (ludicrous and failed) proposal to change the civil law so that in any collision between two and four wheels, four wheels must be presumed guilty.

Shared use ought to work better than it does, but that requires cyclists and pedestrians to be considerate. The local council is planning to spend a six-figure sum on somehow ‘improving’ the Green Dragon bridge at Chesterton, which would be perfectly adequate now for two legs and two wheels if people behaved with courtesy. (This works in Italy, land of the completely volatile car-driver: I was astonished at the care and cheerful good humour of cyclists in the pedestrianised piazze of Ferrara and Mantua, who cycle slowly, and give way to pedestrians and dogs – can’t see that catching on here!)

And, again, don’t get me started on pedestrian and cycle lanes side by side: here it’s not just illiteracy but the apparent inability – I’m sure there’s a word for it – to recognise and distinguish between two common symbols: a stick person walking, and a bicycle, both carefully stencilled to the separate paths at regular intervals. Yes, well-dressed, dark-haired lady with earphones in and head buried up to the neck in iPhone in the cycle lane on Parker’s Piece last Friday, I’m talking to you.

But, strangely enough, this rant is not aimed at the stupid and suicidal, but at the really serious and consistent cycle safety problem in Cambridge: the appalling condition of many road surfaces. I speak as one of the walking wounded, having come off my bike one night nearly six years ago while failing to avoid a hole in the middle of the aforementioned Parker’s Piece cycle lane, and broken a bone in my left elbow, which is now very sensitive to being jarred.

Jarring is, however, the name of the game on so many Cambridge roads. Take the cycle lane on Hills Road between Brooklands Avenue and Station Road, heading into town: the segments of tarmac have been so badly laid against each other that at the gutter side (where the cycle lane is) the edges are starting to crumble, leaving increasingly widening gaps over which the bike bounces. Station Road has similar problems, and Tenison Road, which was resurfaced relatively recently, is a complete cracked mess because of all the heavy lorries, cranes, etc. which have broken up the surface as various redevelopments have taken place: we can only hope that the entire road gets resurfaced again once the current upheavals are over. Driving a car down these and dozens of similar roads all over town, you might notice a bit of a rumble; on a bike, you are in serious danger of being thrown off.

My own street has all the usual holes and cracks, as well as areas where the tarmac is so thin that the Victorian cobbles are emerging, but on the whole, my favourite potholes have to be on Coronation Street. This narrow one-way street is part of a useful cut-through to the centre of town if you are cycling and want to avoid four-wheeled traffic on Hills Road and St Andrew’s Street. The downside is the condition of the surface. The distance from Hills Road to the Panton Street turning is approximately 300 yards, and in that distance there are 82 patches of different surface finishes, and a couple of dozen manhole and other covers, either above or below surface level, to say nothing of ‘traffic-calming’ humps. I was thinking of submitting my photos as an entry for the Turner Prize, but I seem to have missed the deadline, so here is a representative sample from the length of the road. I had no idea that so many different types and qualities of road covering existed: perhaps the road is itself an installation saluting the creativity of John Loudon McAdam (1756–1836), the grandfather of tarmac. 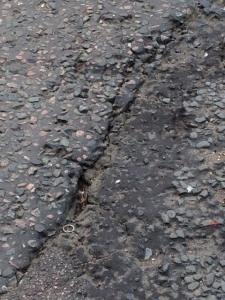 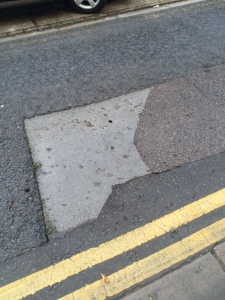 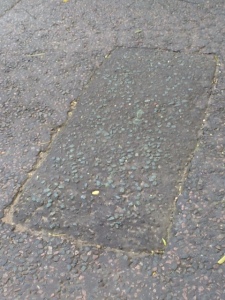 This one may be a grave – ‘The Unknown Cyclist’?

6 Responses to My Favourite Potholes