Him Indoors was let out today (14 November) because he has a ticket for the Lord Mayor’s Show. For us non-Londoners, this is an event which falls sometime between Guy Fawkes and Advent, stops all the traffic in London, and is followed on Monday by the Prime Minister in a penguin suit addressing (ostensibly) the Lord Mayor’s Banquet, but (in practice) the rest of us peasants too, on the state of the nation.

But I see that this year’s event is the 800th, the procession having been instituted in the momentous year 1215. King John (who was not a good man, and had his little ways) issued a royal charter in 1215 allowing the Mayor to be elected by the aldermen of the City rather than appointed by the Crown. (The Mayor in 1215, William de Hardel, was the only commoner officially witnessing Magna Carta.)

The first holder of the office of Mayor of London had been one Henry Fitz-Ailwyn de Londonestone (almost born to the role, with a name like that).

The London Stone, still in its niche on Cannon Street, though the surroundings have changed a bit since Henry’s day.

The post seems to have been created as a quid pro quo by Richard I in 1189, exchanging an increase in taxes to pay for his foreign adventures with greater autonomy for the merchants on whom the burden fell. Henry held the post until 1212, his 24 years in office a record most unlikely to be beaten now that a new Lord Mayor is elected annually – though repeat holdings were not uncommon in the medieval period: another memorable name, Hamo de Chigwell, held the mayoralty on six occasions, and Richard Whittington was Lord Mayor in 1397, 1398, 1406 and 1419. (The title ‘Lord Mayor’ was granted in 1354 by Edward III.) 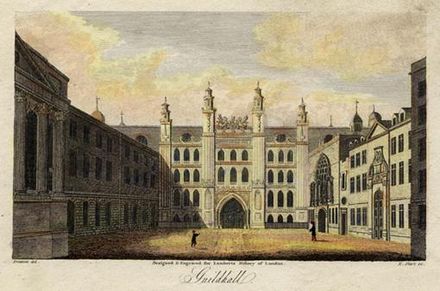 The Guildhall, seat of London’s government, about 1805.

Incidentally, it appears that the rags-to-riches element of the Dick Whittington story is not altogether accurate. His grandfather was a knight-at-arms, so the family must have been reasonably well-to-do, though Richard, as a younger son, was not likely to inherit much. He was apprenticed to a mercer, Ivo Fitzwarin, whose daughter he later married, but the whole kitchen-boy/cat/sea voyage/rats thing seems to have been a later invention.

An early 17th-century print of Whittington, with cat.

He seems to have been a popular mayor, appointed by Richard II (to whom he had both sold goods and lent money) when the previous incumbent died in office: he stayed neutral when Richard was deposed, and lent money to both Henry IV and Henry V. He and Alice had no heirs, so most of his considerable wealth (both in his lifetime and by his will) went to the City. He had funded the rebuilding of his parish church (St Michael Paternoster Royal, later destroyed in the Great Fire and rebuilt to a Wren design), and the rebuilding of the Guildhall. (Incidentally, though he is often referred to as ‘Sir Richard’, it seems that there is no evidence that he was ever knighted.) 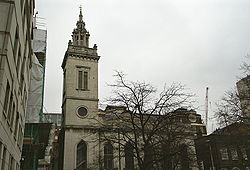 Wren’s church of St Michael Paternoster Royal today. The site of Whittington’s grave is not known.

Among many other benefactions to the City, he provided ‘Whittington’s Longhouse’, a public toilet with 64 seats for men and 64 for women, with a set of almshouses above it. The output of the toilets, above the Walbrook at its junction with the Thames, was cleansed twice a day by the tide: one suspects that the almsmen and -women must have looked forward to high tide. (The convenience was another victim of the Fire: it was rebuilt with only 12 seats, but appears to have been in use at least until the middle of the nineteenth century.)

But back to the tradition of the Lord Mayor’s Show. The (Lord) Mayor was required by the 1215 charter to go to Westminster on the day after he was sworn in by the City, to swear allegiance to the Crown via its representatives, the senior judges (a very sensible precaution: the ceremony now takes place at the Royal Courts of Justice). This used to happen on 29 October, but when we lost our 11 days in 1752, it was moved to 9 November. Since 1959, it has been held on the second Saturday in November, with the ‘Silent Ceremony’ of swearing-in (so called because there are no speeches involved) the day before.

Lord Mayor Newnham takes the oath at Guildhall in 1782. A print by the firm of John Boydell, who himself became Lord Mayor in 1790.

The procession became more of a spectacle and entertainment for Londoners as time passed: the aldermen began to accompany the Lord Mayor, and the livery companies added to the pageantry; musicians were included from the beginning of the fifteenth century, and the first water-borne event was in 1422.

Canaletto’s idealised view of the water-borne procession in 1747.

Canaletto depicted a wonderful water procession – quite a bit of which (including the new Westminster Bridge and the blue Venetian sky, to say nothing of the impossible viewpoint) is imaginary – and in the same year (1747) Hogarth depicted the apotheosis of his Industrious Apprentice as Lord Mayor. 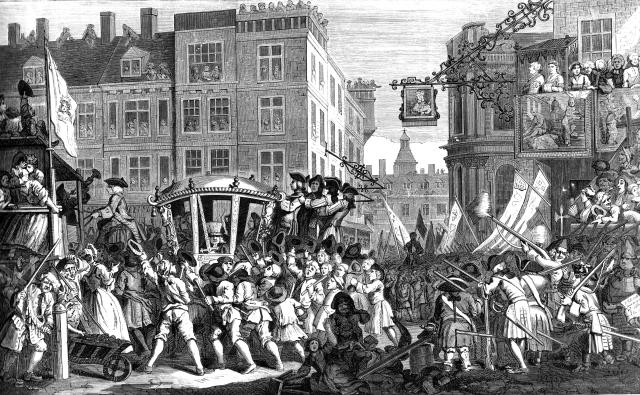 Hogarth’s apprentice, watched by Frederick, Prince of Wales (on the balcony). The man in the fur hat peering from the coach is the Swordbearer, who wears the same outfit today.

(The Lord Mayor used to ride a horse, until an unfortunate collision in 1711 with a drunken flower girl left Sir Gilbert Heathcote with a broken leg and the aldermen with the decision to invest in a coach. The one used today was commissioned in 1757, and is still going strong, apart from an embarrassing moment in 2012 when wheel issues meant the Lord Mayor had to hop into a Landrover.)

Samuel Pepys, unusually for him, was a bit grumpy about the event – clearly, one had to go, but in 1660: ‘we … had a very good place to see the pageants, which were many, and I believe good, for such kind of things, but in themselves but poor and absurd’; and the 1663 show was ‘very silly’.

Let’s hope that nothing (except almost inevitably, poor weather) spoils today’s event, at which 170 horses, 140 vehicles, Taiko drummers (no, me neither), vintage steamrollers, tractors, fire engines, armoured vehicles, a Batmobile, a replica of Noah’s Ark (doubtless life-size) and a tank are all promised. 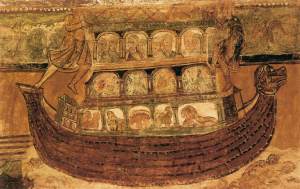 The traditional participants are the Great Twelve [i.e. old] Livery Companies: Mercers, Grocers, Drapers, Fishmongers, Goldsmiths, Merchant Taylors, Skinners, Haberdashers, Salters, Ironmongers, Vintners and Clothworkers. Other livery companies may be invited, and the company of the new Lord Mayor (in this case the Shipwrights) always attends.

Others in the procession will be the Honourable Artillery Company and the Royal Fusiliers (two of the regiments having the Freedom of the City), charities, and, most endearingly, wicker reproductions of the legendary London guardian giants Gog and Magog, created by the Worshipful Company of Basket-Makers – confirming my long-held view that everything is related to everything else. 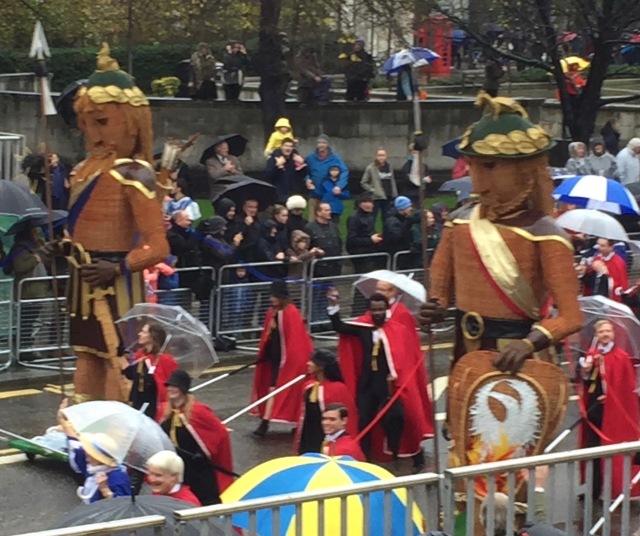 Stop Press! The wicker Gog and Magog. (Credit: Him Indoors)

2 Responses to The Lord Mayor’s Show