Plant of the Month: November

It’s the beech! But why? Surely it’s at its best in spring, when the pale green, downy leaves unfurl from the elegant, tapering buds? At this time of year, buttery Gingko biloba, the exotic Osage orange, or even hazel, with next year’s catkins already burgeoning, would be more appropriate? Or the gunnera, neatly wrapped for winter? 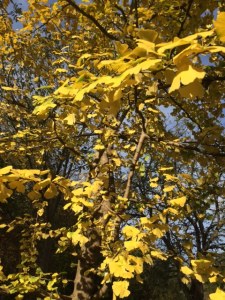 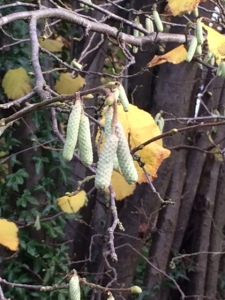 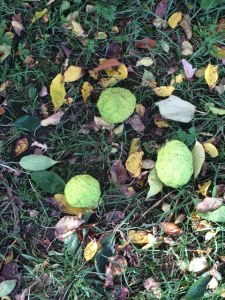 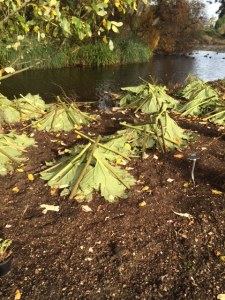 Gunnera, wrapped up neatly for winter.

But this is in fact a wonderful time of year to appreciate the glories of the beech. You can see the structure of the trunk, branches, branchlets, twigs and buds, looking like a living demonstration of a mathematical theory of infinity. 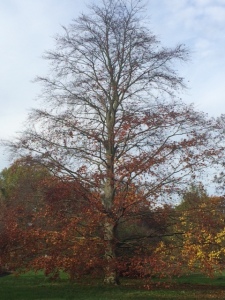 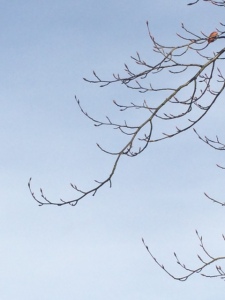 The tracery of beech branches.

In the ridiculously mild autumn we’ve been having (my almanac predicts a plague of greenfly next spring) there are quite a lot of leaves still on the trees, though many more on the ground. 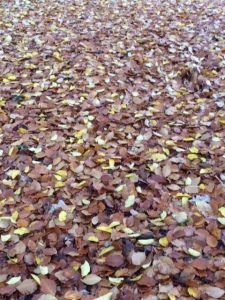 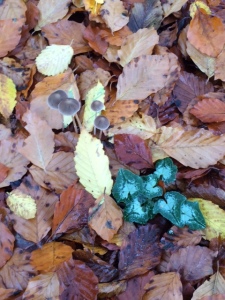 Fungus and cyclamen growing up through the leaf cover. 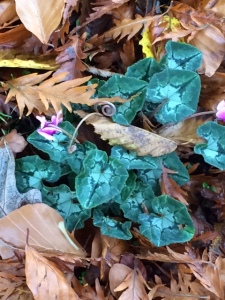 Cyclamen in flower, with the curling stem of a forming seed.

Something I had never noticed is that the leaves of the copper beech (Fagus sylvatica forma purpurea) fade to bronze brown in the autumn, ending up the same shade as the leaves of the ‘normal’ beech, which have crept up to meet them from the other end of the spectrum. 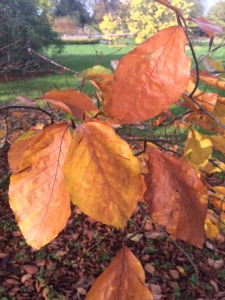 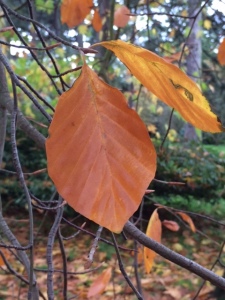 There are still some, very sparse, seed husks, still clinging on, though the beechnuts have long fallen out (or been eaten by squirrels). This was a beast to photograph, because of another wonderful feature of the tree – the branch tips tremble in the slightest movement of air, as though they were strung on wire, like the amazing leafy gold wreaths found in Macedonian tombs. 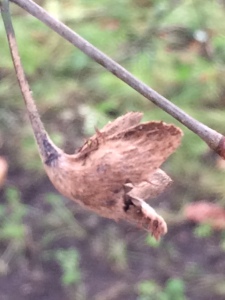 The husk from which the mast has dropped.

Another feature of beeches is that they are shallow rooted, and will grow happily on the thin topsoil of a chalk escarpment, but are therefore terribly susceptible to violent windstorms. (There were tens of thousands of casualties in the great hurricane of 1987.) 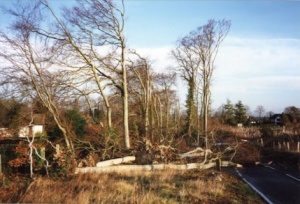 Beeches in Sussex after the 1987 storm.

One of the most famous stands of beech in England must be the one on the hangar above Gilbert White’s house in Selborne, Hampshire, though the largest and tallest beech hedge in the world is in Scotland, and was planted in 1745.

Fagus sylvatica is a northern European native:  though it is classed as a native in southern Britain (though not in Scotland!), there is a suggestion that it was imported after the last glaciation by Neolithic farmers, who valued the wood for fuel and also for use for building and stakes for animal pens, as well as the nuts (beechmast) for feeding pigs. One of the ancient rights of the Commoners in the New Forest is that of pannage (letting pigs loose on fallen acorns and beechmast for a sixty-day period in autumn), called the Common of Mast. In the spring, the relatively late unfurling of the leaves means that flowers, especially the bluebell, flourish in beechwoods, as they are not overshadowed by foliage. 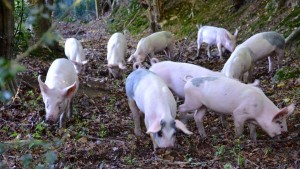 Pigs foraging for mast and acorns.

The timber is used today for carcasses of furniture, though not often as a decorative finish. You probably have at least one piece at home, as it is the most common wood in use for wooden cooking spoons. And apparently the Budweiser brewery uses ‘tiles’ of beechwood to line the fermentation tanks, as this is beneficial to the yeast.

The Latin and Greek names of the tree, fagus and φηγός, show that there must have been a PIE root, *bhāgó-s. However, in Greek, the word designates a type of oak: beech is not native to Greece, though it flourishes in northern Italy. (The Old English, Germanic and Norse cognate is bok: writing tablets were made from thin slabs of beechwood.) 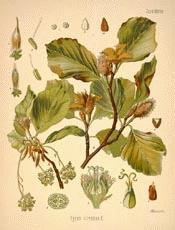 Possibly the most famous mention of the beech tree in literature comes in Virgil’s Eclogues: ‘Tityre, tu patulae recubans sub tegmine fagi / siluestrem tenui Musam meditaris auena …’, a motif picked up again at the end of the Georgics, and probably also by Thomas Gray, in his description of the ‘youth to Fortune and to Fame unknown’ who rests in the country churchyard. 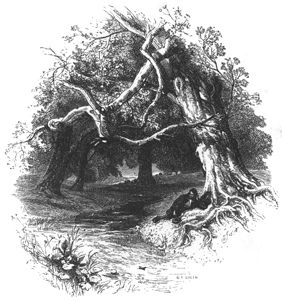 Illustration by Myles Birket Foster for Gray’s ‘Elegy’, in the collection of Favourite English Poems, published in 1862 by Sampson Low.

‘There at the foot of yonder nodding beech / That wreathes its old fantastic roots so high, / His listless length at noontide would he stretch, / And pore upon the brook that babbles by.’ 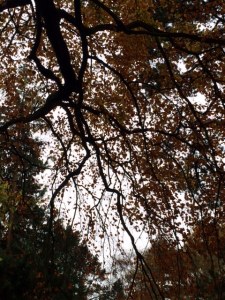 Inside the canopy of a beech. 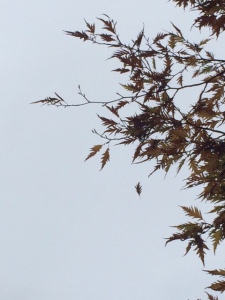 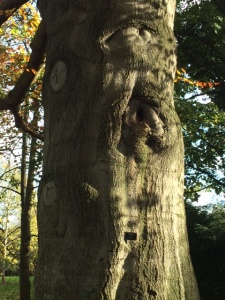 The trunk of one of the oldest beeches in the Botanic Garden. 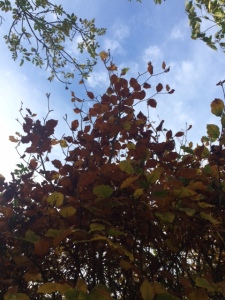 Leaves against the sky. 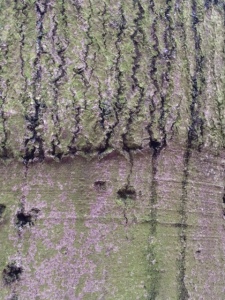 The trunk of Fagus sylvatica miltoniensis, one of Henslow‘s ‘monsters‘. 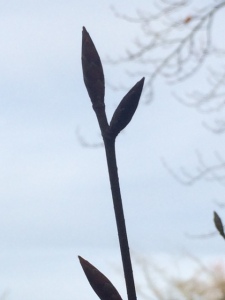 The promise of next spring’s leaves.