Plant of the Month: January

Quite a difficult decision, especially this season, when so many plants are prolonging their flowering, or beginning freakishly early. In the Botanic Garden, the native daffodils seem to have forgotten Perdita’s observation that they take the winds of March with beauty; all the daphnes are pumping out fragrance; and the snowdrops are in full flower everwhere. At home, I have Iris reticulata out while Iris unguicularis (those which survived the slugs) are still flowering, and some of my hellebores are so far advanced that they have already set seed: on bright days, fat bees are very much in evidence.

Galanthus elwesii in the CUBG Winter Garden, with red-stemmed Cornus behind and Helleborus foetidus in front.

Hellebores – especially the miraculous, endless variety of Helleborus orientalis hybrids – are among my favourite plants. I don’t really like doubles (any more than I like double snowdrops or daffodils), though I have one thriving specimen, acquired heaven knows where or when.

Also, I don’t really approve of the breeders’ new trick of getting the flowers to face upwards, part of the charm being that you have to get down low and lift them up yourself to see the intricately patterned insides of the sepals. (The true petals have evolved into nectaries which are almost invisible.) 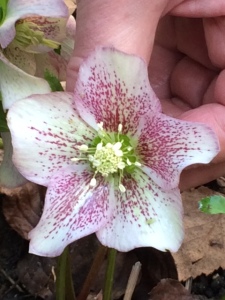 Part of the fun is that you have to lift the heads to see the flowers properly.

I started with three plants, all of which are still going strong over twenty years later, and it’s most exciting to see what the latest seedlings are going to turn out like. They are, alas, hopelessly prolific, and I have to be ruthless in thinning them out, or the whole garden would be completely sunk beneath leathery (and sometimes surprisingly sharp) leaves. Since they don’t flower until they are about three years old, who knows how many wonderful new hybrids are thus being consigned to oblivion? 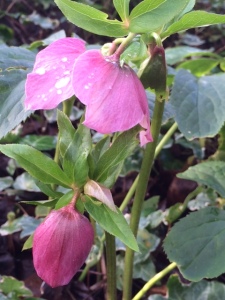 A pink hybrid in CUBG.

The word ἑλλέβορος is Greek: the alleged etymology is from ‘helein’, to harm, and ‘bora’, food (is this plausible?), referring to its poisonous nature (all sorts of nasty symptoms, followed by death from cardiac arrest). In spite of this, it was recognised as a medicine for ‘madness’, so much so that ‘take some hellebore’ appears in Aristophanes as a colloquial way of saying ‘you’re off your head’.

The plant is Eurasian, with a high density of species clustered in the Balkans. There is one far-flung relative, the wonderfully delicate Helleborus thibetanus, originally discovered in western China by Père David, the missionary naturalist, in Sichuan province in 1869. (Remarkably, it was not until 1991 that live specimens were introduced to British gardens, via seed given to Kew Gardens by the Chengdu Institute of Botany.) 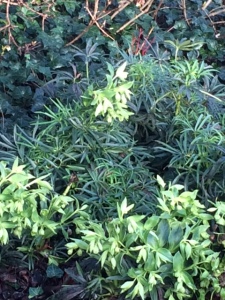 Helleborus niger in the Winter Garden at CUBG.

and creamy yellow to many shades of pink and finally to deep purple.

A deep red variety in CUBG.

My darkest hellebore (of deep sentimental significance, quite apart from its beauty). Damage from aphids is, alas, all too visible.

Extra variation is provided by the freckling on the sepals, which can range from minute pinpricks to colour-changing spattering. Since the sepals (unlike petals) don’t drop, the flowering season can be prolonged until the seed has scattered (unless you want to cut the stems down earlier), and, although ethereal-looking, they are very tough, and not damaged by rain or snow. 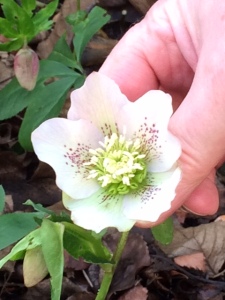 Light speckling: contrast with the one above.

Seeds are developing on this one.

The only downsides (for me) are that the leaves develop a dark, blotchy, disfiguring virus called hellebore black spot: it is controlled by cutting off the affected leaves, but since it’s usual to cut ‘this year’s’ leaves off in autumn anyway, so that the emerging flower buds can be seen, it’s not too big a problem. (There’s a much nastier thing called hellebore black death, but I’ve been spared it so far.) The other is that more mature plants really hate being moved. I thought I’d lost my precious Helleborus atrorubens from Harvey’s Garden Plants, planted last summer, but it’s hanging on in there, though flowerless this year.

This is what I’m aiming for: Helleborus atrorubens should have masses of small, cup-shaped flowers.

The other problem which affects them (along with almost every other plant I grow) is aphids, of which the hellebore has its own special variety – the little beasts have spoiled the flowers of my deep purple ones this year, because the weather so far has not been cold enough to destroy them. But these are very small disadvantages to set against the  infinite variety of the plants! A visit to the wonderful Winter Garden at Anglesey Abbey is clearly due, to get another (and bigger) fix …