The Cost of Sunshine

‘Apart from that, Mrs Lincoln, how was the evening?’ My recent encounters with the criminal fraternity of Palermo were pretty trivial by comparison with the assassination of a President of the United States, but they really brought home to me the difference between knowledge and logic on the one hand and personal and emotional experience on the other.

I’d never been to Sicily before, and had always wanted to see the mosaics at Monreale and Palermo, as well as the classical sites/sights of the island. So the prospect of a week in sunnier climes than England in January, with the bonus of an alleged almond blossom festival with folkloric manifestations at Agrigento, was hard to resist.

The so-called ‘Fountain of Shame’ outside the municipal building in Palermo: the shame derives from the nudity of the statues rather than the city’s reputation for robbery.

Our Palermo hotel was an attractive and comfortable conversion of a palazzo a hundred metres from the (again) notorious Ballarò market, which we had no plans at all to visit, however picturesque it might be. We were at first unnerved at the numbers of men simply standing still on many of the streets; we later realised that at least some of them were migrants who were hoping to earn a pittance by directing drivers to parking spaces and then keeping an eye on the cars.

The view from our Palermo hotel across to the church of St Michael the Archangel, now a library.

The first day (passports and spare money in hotel safe, phones in inside pocket, or in my case in bag worn across body, which was very uncomfortable), we saw some of the sites in town, had lunch by the harbour and supper at an excellent restaurant where the excitable chef popped out to explain each course to us. 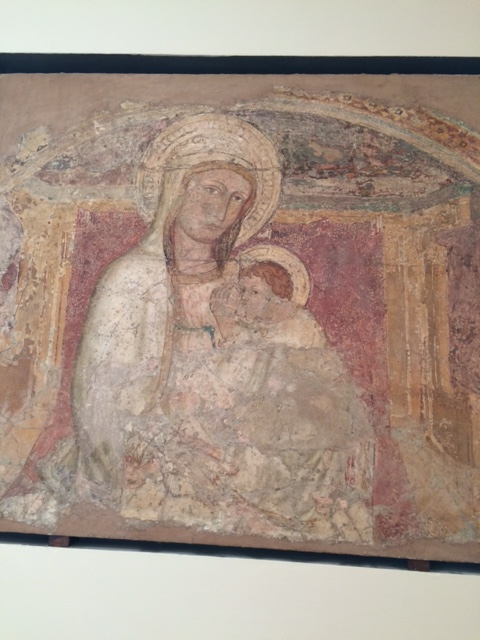 Fresco showing the Virgin and Child, from the church of San Spirito, now in the Palazzo Abatellis.

Next morning, we went to catch the bus to Monreale, hopping on as it was preparing to leave. This was, of course, our first mistake, as it meant that Him Indoors had to get his wallet out to buy tickets. The gang of thieves in any case saw us coming: although I look completely nondescript, Him Indoors has the colouring of his proud Highland ancestors and therefore tends to stick out a bit around the entire Mediterranean littoral.

On some Italian buses, you buy a ticket which you then have to ‘validate’ by putting it into a punch machine. About six men, all with tickets, who had got on through the back door, surged forward to – as I thought – put their tickets in the machine. I, in my polite and gormless British way, allowed them to push between me and Him, who was in the mean time having trouble making the bus driver understand what he wanted.

The next thing that I saw happen was Him apparently squaring up to a tall, burly man who was glaring at him. Even after all the men jumped off, the driver closed the door and drove away, and I saw Him trying to pick up the contents of his wallet off the floor, I still did not realise that he’d been robbed. His wallet had been snatched by one of the men, who, when he tried to grab it back, dropped it on the floor behind him, so that the others could strip it of its useful content, i.e. high-denomination euro notes, before exiting sharply though the bus door.

The other people on the bus were all Italians: those who could see what was going on stared blankly forward without any reaction. The bus driver muttered something in English about ‘bad men’. When we got to Monreale, and got out, the driver made apologetic noises again, and a lady waiting at the bus stop – a tour guide who spoke very good English – overheard and asked what had happened. She said that this was a very common scam at that bus stop, and even described one of the men: apparently, when they are caught, they serve a fortnight or so in prison before returning to their undoubtedly profitable business. (The concept of crime prevention by having police on foot patrol the area (there’s a large carabinieri station two hundred metres away) seems not to have reached Palermo.) There seemed to be little point in reporting the theft: nothing except cash had been taken, and we wouldn’t be getting that back again. So we went to see Monreale cathedral.

The mosaics in the cathedral of Monreale.

The next day was uneventful – we spent a lot of it in Palermo Botanic Garden, of which more anon. But, fatefully, I let my guard down the day after. Early evening, we were walking near the harbour. I had my bag on only one shoulder, and had moved away from Him to look at the façade of a church. I thought someone tapped me on the shoulder: in fact it was the pillion rider of a motor scooter (in a pedestrian area, to add insult to injury), who had arrived silently, snatching my bag as his partner-in-crime accelerated away. Again, there were two or three witnesses: they performed a shrugging, deprecating gesture, and said how sorry they were.

The scene of the crime: the façade of Santa Maria della Catena, where my bag was snatched.

There was nothing of value in my bag except a credit card and my phone. The witnesses said we should report it to the Carabinieri offices just up the street, so we walked up there, but, it being Sunday evening, they were closed. Nearby were two Polizia Locale officers in a car, apparently playing Candy Crush on tablets: we asked them and they said we needed to go to the Polizia Regionale station in Via Roma. They also did the sympathetic shrug routine. Him Indoors said we should first go back to the hotel and block my credit card, which we did: the credit card helpline reported that three (failed) attempts had just been made to withdraw 1000 euros with it at a Unicredit Bank nearby. Moreover, the helpful hotel receptionist had phoned to find where we should go to make una denuncia: this turned out not to be Via Roma (also closed for Sunday), but the Questura about a kilometre in the other direction. There, via a mixture of my Italian and their English we got a formal report logged, and a copy given to us. More apologetic shrugs, and we walked back despondently to the hotel.

The coda to this is cheering, in that as I was reading a just-arrived email on my laptop, a familiar chirrup from the corner of the room showed that my phone had not in fact been in my bag after all, and thus was saved from the wreck. All I lost were my doorkeys, my Loperamide tablets (I can only hope that the bastards tried to get high on them, and remain constipated for a month), my bus pass, my railcard, some ancient and ineffective binoculars, some random paper junk collected over the years, and a guidebook to Sicily with a helpful chapter on how to avoid becoming a victim of crime.

Mulling over the experiences, I find that (quite apart from the general annoyances of hindsight) this has done my faith in human nature no good at all. Why did none of the people on the bus react? Was the driver complicit? Had we been stalked by the scooter duo? Had the police any intention of investigating anything? (They haven’t so far, for example, phoned my ‘missing’ mobile.) Were the car parkers in reality drug dealers? Does the bewildering number of different flavours of Italian police – Polizia di Stato, Polizia Municipale, Polizia Regionale, Polizia Stradale, Polizia Locale, Carabinieri and Guardia di Finanza, each with different uniforms and branding – actually help with the prevention and solving of crimes? Do their computers speak to each other?

Now, I have reason to believe (though I do not from my personal experience actually KNOW) that the vast majority of Muslims worldwide do not support, and are appalled by, the acts of the people we tend to call ‘Islamicist terrorists’. In the same way, I would really like to believe that the majority of Palermitani are not thieves, conmen and robbers: but the evidence of and reaction to my own experience is at the moment unfortunately tending to override logic.

Some of the mosaics in the Capella Palatina in Palermo, close by the fatal bus stop.

Like Loading...
This entry was posted in Art, History, Museums and Galleries and tagged bag-snatchers, mosaics, Palermo, pickpockets, Sicily, thieves. Bookmark the permalink.

4 Responses to The Cost of Sunshine