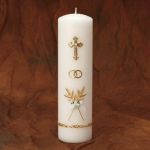 What I know about the Tractarian controversy of the nineteenth century could be written on the head of a very tiny pin and is mostly drawn from the fiction of Antony Trollope (though I have no reason to believe he’s not in fact a good guide). However, recent reading has revealed some fascinating details about the effect of the Tractarians on church music, and the minutiae of the various debates/arguments/squabbles are fascinating, not least for their (to a twenty-first-century eye) quite staggeringly triviality – especially in the context of the horrendous social problems which many of the Anglican churchmen involved in the controversy were simultaneously (or perhaps consequently) able to ignore.

I came across The Choral Revival in the Anglican Church (1839-1872) (1970), by Bernarr Rainbow (not a typing error), while loitering in Cambridge University Library, and have been reading it in patches since. Simultaneously, I’ve been having a go at Andrew Gant’s recent O Sing Unto the Lord (actually a Christmas present for Him Indoors), which also deals, more briefly, with the revival of church music in the first half of the nineteenth century. Rainbow was a teacher and musicologist who did a great deal of research on choral singing teachers such as John Hullah, Frederick Arthur Gore Ouseley, Joseph Mainzer and John Curwen, and looking at the original publication dates of those of their works which we reissued in the CLC, I now see the context, or bigger picture… 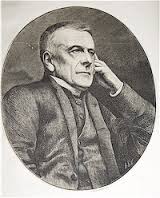 Frederick Oakeley (1802–80) might have followed a Trollopean path up the gently sloping hill of Anglican preferment, and was already on track (Christ Church, Oxford, Latin and English prizes, ordination in 1828, fellow and chaplain of Balliol), but in 1839 (and already influenced by the Oxford Movement) he took on the incumbency of Margaret Chapel, just off Oxford Street in London. As he wrote in Historical Notes on the Tractarian Movement (1865):

‘Time was when Margaret Street was as devoid of romantic interest and ecclesiastical prestige as any other member of that peculiarly dull family of public highways, redolent of Queen Anne and the first Georges … The chapel itself was a complete paragon of ugliness; … It was low, dark, and stuffy; it bore no other resemblance to the Christian fold than that of being choked with sheep-pens under the name of pews; …  it was begirt by a hideous gallery, filled on Sundays with uneasy school-children. But the triumph of its monstrosities was just where, upon the principle “corruptio optimi pessima,” we might have expected — in the chancel. From the floor almost to the roof there arose a tripartite structure, beginning with the clerk’s desk and terminating in the pulpit, the minister’s “reading-pew” occupying the interval. Thus the preacher was elevated on a kind of throne, as if in parody of that which surmounts a Catholic altar; and there he stood, claiming, as it were, the adoration of the people. Where was the communion-table? I will answer the question. It filled the space between the reading-desk and under the pulpit. The first act of the new minister was to demolish this three-headed monster.’ 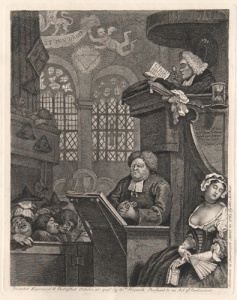 Hogarth in the previous century had frequently satirised the height of the pulpit and the indifference of the congregation. 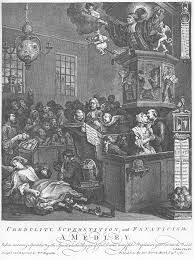 This led to massive resentment from the chapel clerk, whose privilege it had been, for over fifty years, to occupy the lowest tier of the pulpit. He and his cats proved one of the many trials to Oakeley in his efforts to improve the seemliness of both the chapel and its services; but a greater was the attitude of the bishop of London (Charles Blomfield, Greek scholar and editor of the short-lived Museum Criticum). His was apparently of a genial and kindly nature, and he was a reformist in Anglican terms, but he seems to have been very suspicious of anything which might be ‘novel, offensive, and savoured of Popery’.

Thus, ‘We might have candles, we were told, provided we would not light them. We were restricted to one bouquet of flowers on the communion-table, and were required to take especial care that white did not predominate on the feast of a virgin, nor red on that of a martyr. We might collect offerings on a dish, but a bag was considered “popish”. We must not gaze intently on the alms-dish, lest the people should think that we worshipped it. We might preach in a surplice in the morning if we would wear a black gown in the evening, and thus neutralise Rome by Geneva.’ What is especially remarkable about this passage is that the ladies doing the church flowers is as much a symbol of the continuity of English life as warm beer and cricket. Who knew that less than two hundred years ago it was a dangerous practice and might lead down the primrose path to Rome? 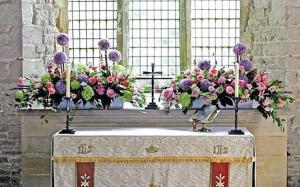 At least the candles aren’t lit!

Undaunted, Oakeley formed a choir and taught it to sing the psalms, said the services daily, and in general enlarged his congregation to include many of the great and good, including W.E. Gladstone. He left the chapel in 1845, having indeed succumbed to the allure of Rome, became a student at the London Catholic seminary, and eventually was created a canon of the Westminster diocese by Cardinal-Archbishop Wiseman. Is there, by the way, a more endearingly ugly building in London than Westminster Cathedral? (As opposed to all the ones that are just plain ugly?) Oakeley would have loved it, though sadly he died in 1880, before even the land (formerly the Tothill Fields Bridewell) had been acquired and the architect John Francis Bentley had begun to let rip. 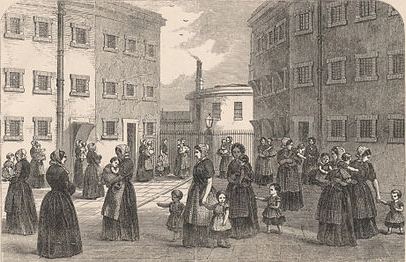 Women and their children taking exercise in the Bridewell. 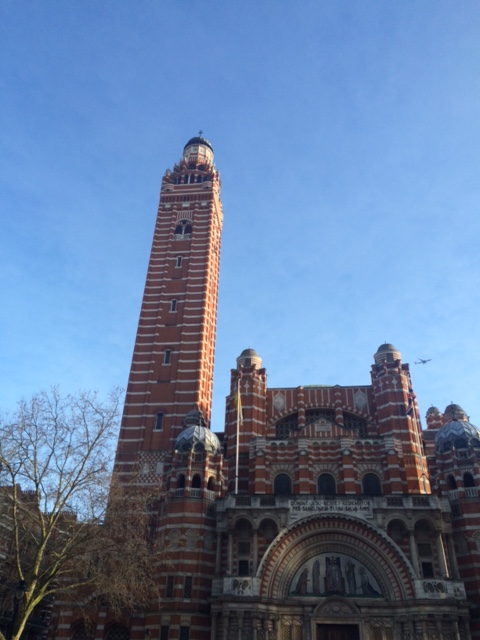 But while he was still incumbent at the chapel, Oakeley began the fund-raising process to transform his ‘complete paragon of ugliness’ into the High Gothic jewel which it remains today, as All Saints’, Margaret Street, the earliest masterpiece of William Butterfield (1814–1900), who went on to design (among much else) Keble College, Oxford. Ruskin‘s Seven Lamps of Architecture had been published in 1849, and it looks as though Butterfield in his 1850 commission had taken on its message of polychrome brick and the wonders of Italian Gothic (though the spire, almost invisible when you are close to the building, looks Germanic rather than Italian to me). 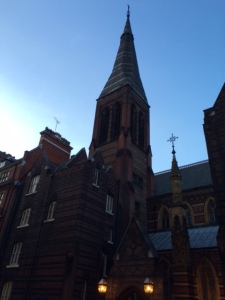 The spire of All Saints’, Margaret Street. 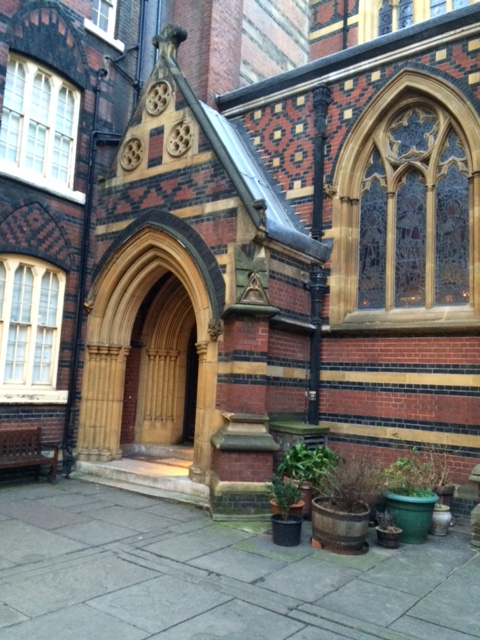 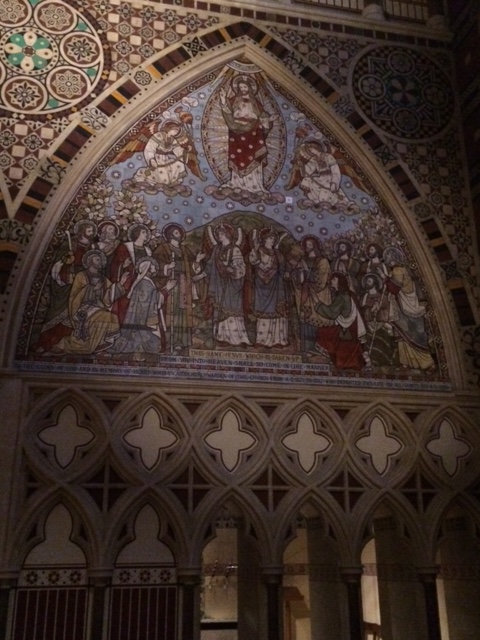 One of the tile mosaics on the walls.

It is indeed stuffed with all sorts of saints, both in the stained glass windows and the tiled images on the walls. The pietra dura work on many of the surfaces, and on the font, is superb, and there is a later Lady Chapel by Ninian Comper with a remarkable canopy. The complex also contains a clergy house and the choir school which Oakeley saw as integral to his plans for worship (though the latter is now used for the parish room and residential purposes).

It is thanks to Oakeley, and other musical pioneers of ‘ritualism’ such as Thomas Helmore (who, incidentally, was the co-exector, with Baroness Burdett-Coutts, of the will of Chauncy Hare Townshend) and John Mason Neale, that what we think of as a time-honoured and enduring Anglican musical tradition was in fact saved from complete extinction. And if you think you’ve never come across Frederick Oakeley before, you probably have – as the translator of that quintessential Christmas carol, ‘Adeste, fideles’, into English, as ‘O Come, All Ye Faithful’.