My Own Private Robin

A sadly long time ago, my aunt and uncle had their own robin, who would turn up most days at teatime and flit around the veranda, looking increasingly impatient and peremptory, until he was served with either crumbled digestive biscuits or crushed peanuts. Most people who have a garden have ‘their own’ robin – or indeed several, though unless an individual has a particular characteristic such as an ornithologist’s ring, or missing feathers after a close encounter with a predator, you are unlikely to tell one from the other.

I have seen three robins at one time inside my own garden; there must be hundreds in the Botanic Garden; and where I used to work they could be heard singing after dark in the vicinity of the streetlights. I see from the RSPB’s Big Garden Bird Watch of 2016 (which I didn’t take part in, for once, having decided that being robbed in Sicily would be more fun) that these apparently ubiquitous birds appear at only ninth in the Top Ten (with the wonderful long-tailed tit appearing in the list for the first time at tenth, possibly benefiting from the mild winter).

But what prompted musings on the robin (whom I can hear singing as I type) at this point was the confirmation a week or so ago that robins have nested in the ivy on the end wall of my garden, and have raised at least one fledgling, who is now being fed in the branches of the apple tree by his/her devoted parents.

The apple tree and the ivy.

In February, I was trying to thin out the variegated ivy which I had planted nearly thirty years ago to clothe the back wall, and in which blackbirds have nested before, when I noticed that I had not just the one robin following my every move, but two, and that they were getting increasingly agitated. Although it seemed a bit early for nesting, I retreated, and my caution is now rewarded by the sight of this youngster, sitting, fluffy and appealing, flinching as other birds dodge by as it waits for its Anxious Parent to come back with a beakful of something. 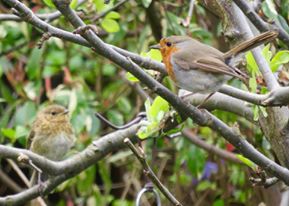 The baby (on the left) doesn’t acquire the red breast feathers for several months.

I see from my invaluable Ladybird British Birds and Their Nests that robins lay between three and nine eggs (and may well produce three clutches in one season). Am I seeing one survivor from a clutch, or are different fledglings being brought out one at a time for feeding? While the weather was cold and rainy (again), I turned into an Anxious Parent myself – is he dry and warm enough: and what about the Curse of the Back Wall, a large black thug of a cat who occasionally walks along it, and recently savaged poor Max the Cat in his own garden? Nature can be cruel, as it was to the blackbirds in the wisteria last year … But the baby is still there, and running its parents ragged with ever-open beak.

The scar on Max’s forehead has healed, but we’re thinking of getting him counselling for the trauma.

I don’t think the picture of the robin in the Ladybird book is as good as some of the others by Allen W. Seaby: the pose rather takes away from the characteristic plumpness of the adult bird, and the grey-blue line of plumage which divides the red breast from the brown back is too wide and goes too far up the head. Somewhat to my surprise, the adult robin drawn on the RSPB website has a similar blue band, which simply isn’t visible on any live or photographed bird I’ve ever seen.

Seaby’s picture of the robin, its young, and its egg.

The binomial Erithacus rubecula was bestowed in 1800 by Cuvier upon the European robin; Linnaeus had used Motacilla rubecula. The birds’ immediate relatives include the chats and flycatchers. The name ‘robin’ was applied by explorers, travellers and colonists to any bird with an orange breast, however unlike the European robin they may have been in other respects. (And, in passing, is it true that the robin was called a ‘redbreast’ because English didn’t have a word for the colour ‘orange’ until the fruit ‘orange’, Fr. pomme d’orange, It. arancia, Arabic naranj, Sanskrit naranga, became commonplace?) The robin’s other English name is ruddock (first use about 1000 CE, according to the OED), or indeed robin ruddock.

Whichever, it has an important function in English folklore: it buries people, dead or alive. According to John Brand, ‘it is commonly said, that if he [the robin] finds the Dead body of any rational creature, he will cover the face at least, if not the whole Body with Moss’. The tale of the ‘Children in the Wood‘ (now dwindled into the pantomime ‘Babes in the Wood’ and given a happy ending) describes the abandoned children:

No burial this pretty pair / Of any man receives / Till Robin Redbreast painfully / Did cover them with leaves.

Shakespeare obviously knew about this belief: in Cymbeline, as her unknowing brothers mourn over the apparently dead Fidele (alias Imogen), and just before the overwhelming ‘Fear No More the Heat of the Sun’, Cadwal (alias Prince Arivragus) says

… thou shalt not lack
The flower that’s like thy face, pale primrose, nor
The azured harebell, like thy veins, no, nor
The leaf of eglantine, whom not to slander,
Out-sweeten’d not thy breath; the Ruddock would
With charitable bill – O bill sore shaming
Those rich-left heirs, that let their fathers lie
Without a monument! – bring thee all this;
Yea, and furr’d moss besides.

This illustration by Randolph Caldecott is one of a sequence for ‘The Children in the Wood’.

A cynical essayist for the Gentleman’s Magazine (September 1735) remarks: ‘the Robin Redbreast hath been the source of great Superstition among the Common People of England … One great instance of this is their readiness to admit him into their Houses and feed him on all occasions; though he is certainly as impudent and as mischievous a little Bird as ever flew’ – which rather misses the point: it’s the boldness (where other birds are much more nervous) that we love him for. 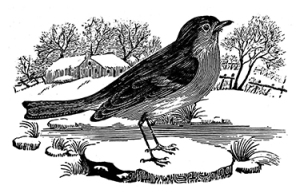 The Christmas association appears to be twofold: first (again) the boldness of the birds in coming close to homes to be fed in cold and snowy weather; second, the nickname of ‘redbreast’ for postmen, who wore a bright red uniform coat (not a waistcoat, as has been asserted) in the early days of the penny post.

The postman cometh, from a popular song of the 1840s.

The delivery of Christmas cards by robins has been a motif ever since Sir Henry Cole sent a greeting card to his friends in 1843, and shows no signs of losing popularity.

This Christmas card is from the 1930s.

There is much more, of course, in the poetic tradition. According to William Blake (and I’m sure he’s right), in Auguries of Innocence (1803, published 1863): ‘A robin redbreast in a cage / Puts all heaven in a rage.’ Thomas Hardy has a callous ending for the robin in winter: ‘I turn into a cold, stiff / Feathery ball!’ Wordsworth upbraids the delightful bird for trying to catch a butterfly. And I’ve barely scratched the surface of the folk ballads: trying to find out ‘Who killed Cock Robin?’, I came across a sequence of coincidences that requires a separate blog of its own. Meanwhile, off to top up the bird-feeders…

6 Responses to My Own Private Robin