Plant of the Month: May

At the beginning of May last year, wisteria was flowering its head off in Venice. This year, at the same time, it was almost over, except for some plants on very shadowed or north-facing walls. And back at home, it is catching up fast: compare the wisteria thicket in the Botanic Garden on 14 May, and today (below).

Wisteria on 14 May, almost dwarfed by the surrounding cow parsley.

The same plants on 27 May, fuller in both flower and leaf.

Wisteria by the yard in Venice, May 2015

The botanist Thomas Nuttall (1786–1859), who first used the name ‘wisteria’, was a Yorkshireman who spent the years 1808–41 (and 1847–8) in America. His start in life was as a printer’s apprentice, but he became increasingly interested in the natural world, and in 1807 sailed to Philadelphia. Whatever his reasons for emigrating, and however he supported himself, he clearly immersed himself in American natural history, and in 1811 took part in an exploring/fur-hunting expedition 1500 miles up the Missouri river and into potentially hostile territory. 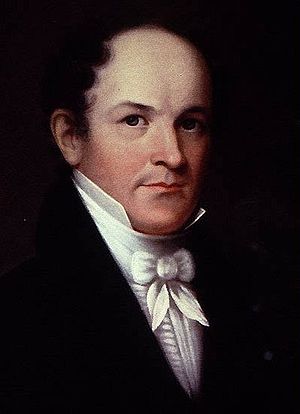 Thomas Nuttall in later life, by an unknown artist.

He returned to England at the end of the journey (probably planning his major work, The Genera of North American Plants, and a Catalogue of the Species, to the Year 1817) but was back in Philadelphia in 1815, and the book was published there in 1818. He continued his exploration and botanising, until in 1822 he was appointed curator of the botanical garden at Cambridge, Massachusetts, with a lectureship in natural history at Harvard University.

In 1834, at the age of 48, he again obeyed the call of the wild, going on a two-year expedition to Oregon, botanising down the western seaboard to California, then to Hawai’i, and eventually back to Boston via Cape Horn. He continued to live mostly in Philadelphia until he returned to England for (almost) good in 1842 (there was one brief trip back to Philadelphia in 1847-8), dying in 1859.

It is clear from his 1818 book that Nuttall knew of the bean family plants which we now call wisteria and that Linnaeus named ‘Glycine’. 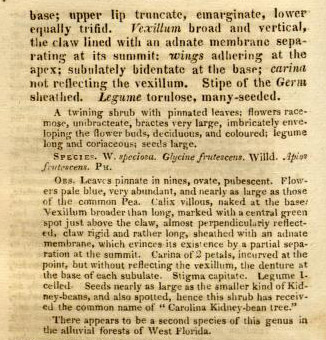 However, he was referring to the American version of the vine, which he called W. preciosa. His note on the name (above) cites the German botanist Caspar Wistar (1761–1818), but he himself spells the word with an ‘e’: he was apparently a friend of the Wister family of Grumblethorpe in Germantown, near Philadelphia, which may have influenced his choice. J.L.M. Poiret (1755–1834) apparently renamed the American plant W. frutescens, and there is also a claimed variety called the Kentucky wisteria (W. macrostachya) which may in fact not be a variety at all. 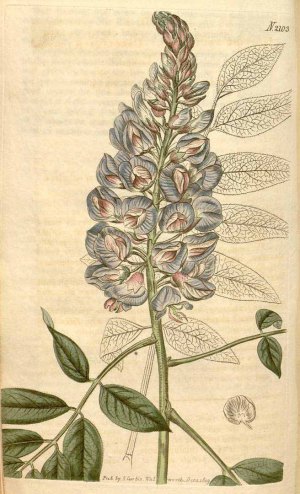 Most people call it wisteria (spelled thus), and in Europe, although Mark Catesby had introduced W. frutescens to Europe in 1724, the species most people are familiar with are from either China or Japan.

Both the Chinese (W. sinensis) and Japanese (W. floribunda) species became known in the west at the end of the eighteenth century, when both formerly ‘closed’ societies began to be opened up to European diplomats, traders and travellers.

Drawings and accounts of these spectacular plants made them a ‘must-have’ sensation, until the seeds brought back sprouted, and it was realised quite how slow-growing the plant is. (Seed of course does not necessarily come true, and among the variations noticed was that some plants took even longer to flower than the 10-year average.) 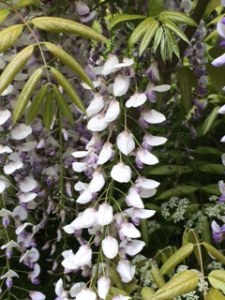 The top petals fold back gradually to give insects access to the flowers.

The upper petal is flexed back, revealing the darker lower petals.

Further investigation revealed that, in both countries, plants were propagated by layering, and with the use of Wardian cases, it became possible to ship live plants back to Europe, and increasingly to America, where the scented, dangling racemes quickly made the Asian plants more popular among gardeners than the more upright flowers of the natives.

The oldest surviving wisteria in the UK is claimed to be the one on the wall of Fuller’s Brewery in Chiswick, London, planted in 1816. In the Far East, there are records of plants even older, and in 1920 someone diligently counted a vine (age not specified) in Ushijima, Japan, which measured 32 feet in circumference and produced more than 80,000 trusses of flowers.

Wisteria is also popular as a subject of paintings and as a decorative motif for all sorts of crafts from jewellery to embroidery. The work of the Impressionists, especially Monet, was one driver, as was enthusiasm for japonisme, exemplified in the woodblock prints of America artist Helen Hyde (1868-1919). 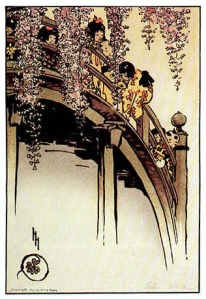 The flower shape seems especially to have appealed to the Arts and Crafts movement, while Louis Comfort Tiffany’s wisteria lamp is one of his best known works, and has been imitated endlessly.

I suppose the great appeal of the plants – aside from their intrinsic beauty, of course – is the ‘something from nothing’ effect. After it loses its leaves in autumn, it looks warped, twisted, and extremely dead: even in early spring the buds look as though they are never going to swell. 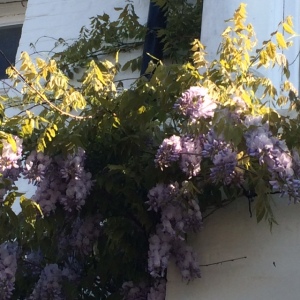 This is mine, up the front of the house.

But then, for a month or so, the blossom is in its full, extraordinary glory. And, by the way, my own beloved specimen is on a north-facing wall and gets sun only at the beginning and end of the day, but this has not cramped its flowering style.

1 Response to Plant of the Month: May