The great moment has arrived: Sebastiano del Piombo’s ‘Adoration of the Shepherds’ has gone on display in the Flowers Room at the Fitzwilliam Museum, just outside the Italian Gallery where it may well finally hang.

Although it was part of the Founder’s Bequest in 1816, the painting has not been on permanent show for a great many years, largely because of its condition – serious paint loss followed by several attempted restorations meant that it was no longer clear what Sebastiano had painted and what was later well-meaning pastiche.

Nor indeed was it always obvious that del Piombo was in fact the artist. The painting had long been thought to be by Giorgione – to whom, because of the mysterious nature of much of his output and the high esteem in which he was held, many works were hopefully attributed in the eighteenth and nineteenth centuries which are now believed to be by others. His own, firmly attributed, ‘Adoration of the Shepherds’ is in Washington, DC, and can be seen online here.

Our painting was acquired by Philippe d’Orléans (1674–1723), nephew of Louis XIV and Regent of France before Louis XV came of age. It did not sell in any of the London auctions at which the great collection was scattered in the 1790s, and Viscount Fitzwilliam bought from a dealer it in 1800. When Gustav Friedrich Waagen (1794–1868) saw it on his tour in 1835 it was attributed to Giorgione, and in Volume 3 of his later Treasures of Art in Great Britain (translated by Lady Eastlake, 1854) he describes it as: ‘Giorgione. — “The Adoration of the Shepherds”. From the Orleans Gallery. Noble in the characters; the Child especially very beautiful; the colouring full and glowing. It resembles in all respects the picture of Jacob and Rachel in the Dresden Gallery.’ (The latter picture is now attributed to Palma Vecchio.)

I had assumed (completely wrongly) that Sebastiano del Piombo was so called because he was from a family of metal-workers (piombo, Lat. plumbum (as in ‘plumbers’) = ‘lead’. In fact, he didn’t get that epithet until quite late in life, when in 1531 Pope Clement VII gave him the sinecure post of piombatore papale (keeper of the papal seal, the lead bulla attached to papal proclamations, or ‘bulls’). 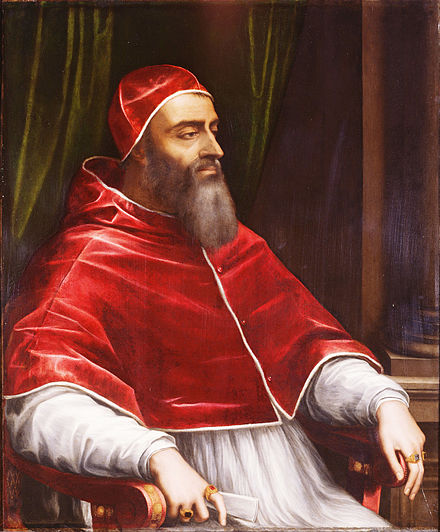 Sebastiano del Piombo, ‘Pope Clement VII’, and below, a lead seal of the pontiff. 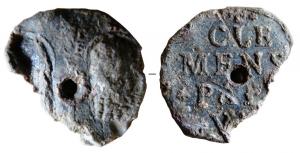 If Vasari can be relied on, Sebastiano Luciano (sometimes known as ‘il Viniziano’) was born about 1485. He was a keen musician: ‘besides being a singer, he much delighted to play various kinds of instruments, and particularly the lute’. But having decided to take up painting, he became a pupil of the aged Giovanni Bellini, and afterwards, when ‘Giorgione da Castelfranco had established in that city the methods of the modern manner, with its superior harmony and its brilliancy of coloring, Sebastiano left Giovanni and placed himself under Giorgione, with whom he stayed so long that in great measure he acquired his manner’.

Again according to Vasari, Sebastiano went to Rome at the urging of a rich patron, Agostino Chigi of Siena (whose descendants continued to be patrons of the arts), and moved in the circle of Raphael and Michelangelo (who was godfather to Sebastiano’s son, born in 1520, though the two men later fell out over the preparation of the walls of the Sistine chapel).

He eventually became the most famous and sought-after painter in Rome, but (Vasari again), the piombatore papale role necessitated him taking a friar’s habit (he had another sinecure, apparently, as a canon of the cathedral of Torcello), which led to him ceasing his idle pursuits of music and – allegedly – painting. (Eating, drinking, and good company, however, were carried on with relish.) He died suddenly of a fever in June 1547: ‘Art suffered no great loss in his death, seeing that, as soon as he assumed the habit of Friar of the Piombo, he might have been numbered among those lost to her.’

It is suggested on the short film which can be viewed on the Museum’s website that the ‘Adoration of the Shepherds’ is a transitional piece: Venetian colour dominates, but the angular forms and gestures of the shepherds are more Roman in style, and recall Michelangelo. But how did it get into a condition in which it was thought not appropriate to have it on display? The answer is toe-curling, and is given a thorough description in this very interesting account of the ‘conservation’ treatment handed out in the 1770s to another Sebastiano masterpiece, the ‘Raising of Lazarus’, now in the National Gallery.

Both paintings were on wooden panels. At the time, the theory was that, by removing the paint layers from the unstable, possibly worm-eaten wood and transferring them to canvas, the future of the image would be secured. The proponents of the technique were a father and son named Hacquin, originally cabinet-makers. They seem to have taken a showman-like approach to the process – reminiscent of Thomas Pettigrew’s mummy-unwrapping dinner parties – using planes and chisels to carve away the wood. (Another expert’s ‘secret method’ was to use nitric acid vapours to separate the paint from the wood – fine, presumably, except for those pigments which would dissolve when exposed to the vapours…)

The English connoisseur Richard Payne Knight was scathing about the effect on the ‘Raising of Lazarus’, which he seems to have known before its ‘conservation’: ‘those who have only seen it since that fatal operation of cutting away the pannel [sic] on which it was painted, and gluing cloth to the back of the colour in its place, can form but very imperfect notions of what it was before’.

This treatment, carried out on the ‘Adoration’, seems to have been disastrous – large amounts of the original paint were lost, and various attempts were made subsequently to patch and repair. My photo of the photo of the painting when all the more recent additions had been stripped back gives an idea of the condition (there is a better one on the website!). 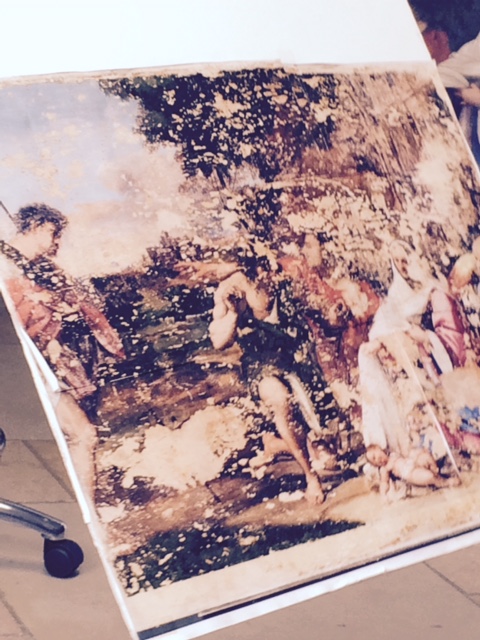 In fact, the brave decision to attempt a complete restoration was taken ten years ago, and it is calculated that five years of person-hours by the immensely skilled and experienced team at the Hamilton Kerr Institute went into the painting that we can see today, in its new antique frame.

My photo of the restored version: again, go online, or even better, go and see the painting!

It may not be a complete masterpiece: to my amateur eye, there is something very wrong about the green-robed shepherd’s left arm, slap in the middle of the picture. And, as so often, the baby is just plain weird in terms of what a new-born baby looks like. (More on this soon …) But as an example of the amazing possibilities of modern conservation and restoration techniques (all of which have to be completely reversible), it’s difficult to beat.

3 Responses to Layers of Paint