Plant of the Month: June

The obvious plant would be the rose (which seems to be having a wonderful year in general, though I’m cheerfully expecting my ‘Félicité Perpétue’ flowers to turn into blue, mildewed mush, as it always rains in June just as their buds are opening). But, simply because my own is looking so stunning at the moment, my choice falls on Cornus kousa, or Japanese dogwood. 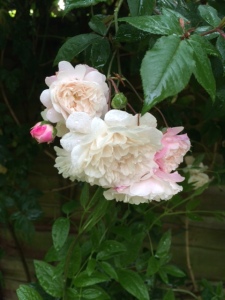 The Cornus family is (very) broadly divided into three types: the ‘shrubby’ dogwoods (C. alba, C. sericea and C. sanguinea), grown for the spectacular colour of their stems in winter and early spring; the flowering dogwoods (including C. florida, C. kousa, C. capitata and C. nuttallii – named (by Audubon, no less!) for the botanist Thomas Nuttall); and the cornelian cherry (C. mas).

There is also the tiny C. canadensis, the spectacular C. controversa (the ‘wedding cake tree’), and C. alternifolia, the ‘pagoda dogwood’.

I don’t grow the shrubby sort because (a) I don’t have room, and (b) I don’t think I could steel myself to prune/coppice them as drastically as necessary to get the coloured new stems (even assuming I ever retrieve my secateurs, last seen two weeks ago and probably in the undergrowth …). 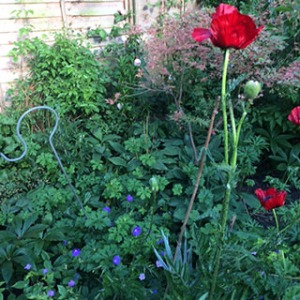 That sinking feeling, when you’re pretty sure they’re in there somewhere…

Luckily, the keepers of the Winter Garden at CUBG rise terrifically to the pruning challenge, and the whole area glows in the low winter light. 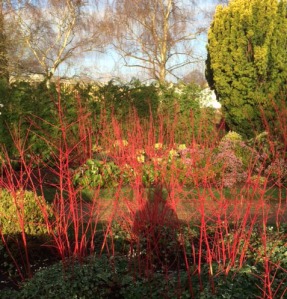 A few years ago, C. canadensis, a delightful little creeping variety, was everywhere at Chelsea, and of course I succumbed to a packet of seed, but – alas ­– I didn’t get even to the point of failing to germinate the seeds or have the seedlings damp off, because I mislaid the little packet among (I assume) all the brochures, leaflets, plant lists and bits and bobs that one collects in armfuls on these occasions (before one even starts on the shopping …). 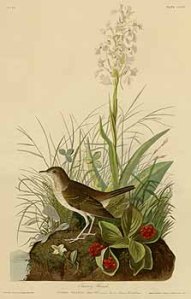 But I later learned that it needs dampish, acid conditions, so it probably wouldn’t have liked my neutral, bone-dry soil much anyway. (This year’s ‘everywhere’ plant, by the way, was a terrific iris called ‘Kent Pride’.)

No, my current pride and joy is my C. kousa var. chinensis ‘China Girl’, which I bought as a small shrub several years ago from Junker’s Nursery, and is now about 10 feet high, and, as you can see, flowering its socks off.

However, these gorgeous creamy, four-star petals are in fact bracts: the actual flowers, in the centre, are minuscule. All species appear to have only four bracts normally (see below), though some varieties are semi-double, or somewhat convoluted, like this one from Mexico. 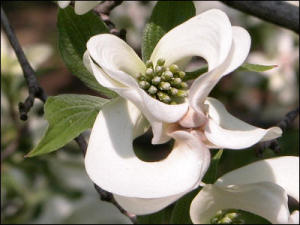 The basically white/cream colouration occasionally shows pink at the edges, and the pink colour has been bred for, the most famous example being ‘Miss Satomi’ (Cornus kousa var. chinensis ‘Satomi’).

I found online this fascinating application for a patent on a new, spontaneously arising and truly spectacular dark-red cornus, from the American nurseryman F. James Schmidt. 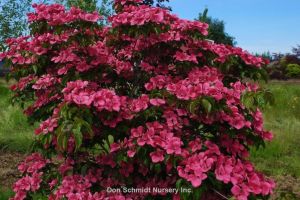 Ain’t nature wonderful … but I have to admit that I prefer the pure cream, sometimes tinged with green or pink, of the more traditional varieties. 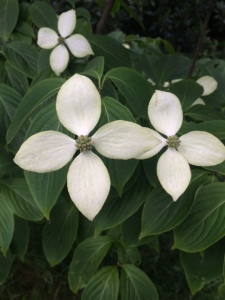 C. multinervosa in CU Botanic Garden: the bracts have a slight green tinge.

Flowering cornus come both from North America and the Far East: China, Japan, and Korea. I have always pronounced C. kousa as ‘ko-oo-sa’, assuming that it had a Greek etymology. Others say ‘cow-sa’; and I have recently read that it is the Japanese word for (spoiler alert!!!) ‘dogwood’, and should be pronounced koo-sa, but a teacher of Japanese disagrees: the Japanese word is apparently ‘yamaboushi’.

The name was given by F. Buerger (about whom I can’t find out much) and confirmed by the botanist and diplomat Henry Hance (1827–86), although it was published in the 1870 (and therefore posthumous) edition of Flora Japonica by P.F. von Siebold and J.G. Zuccarini under the name of Benthamia japonica, earlier given it by John Lindley in honour of George Bentham (1800–84), Secretary of the Horticultural Society and nephew of the more famous Jeremy. (That’s enough about names, you may well feel.)

Although the great plant explorer J.G. Veitch introduced a variegated variety of C. controversa to the west after his trip to the Far East in 1860–1, I’m also having trouble finding an introduction date for C. kousa more precise than about 1875, when the British-born Thomas Hogg (1820-92), nephew of the more famous Robert, sent specimens to his family’s nursery in New York.

C. kousa hasn’t exactly conquered Europe in the same way as some other eastern species (just as well, you may feel), but as a specimen large shrub or small tree, with wonderful spring ‘flowers’, edible fruit and good autumn colour, it ticks a lot of boxes, and, in this so-far gloomy June, it really brightens the whole garden – the advantage of bract over petal being that it is much more water resistant!

Sometimes there is an extra bract … this ‘flower’ also shows the pink tinge at some of the tips, and is not in bad condition after more than three weeks of intermittent downpours…