Rustat Road in Cambridge is where, in a former century, one used to go and pay one’s water rates to the Cambridge Water Company. I haven’t been able to find a picture of the building online, but I have a dim memory of an impressive brown-brick edifice with lots of dark wood in the entrance hall, to which one cycled over the Hills Road bridge and down Cherry Hinton Road, to avoid the extra cost of a stamp. The building had a lot of space around it, which couldn’t of course be allowed to happen, and by at least 2005 (probably earlier) it had been demolished, to be replaced by apartment housing and a small-business unit.The name itself meant nothing to me – the association of water, the brown bricks and the ‘rust’ conjuring up, if anything, the slow drip from an old garden tap. I should however have realised that in a cluster of streets with names like Greville, Corrie, Coleridge, and Radegund, Jesus College must at some point have owned the land, and that Mr Rustat was therefore likely to have been an alumnus and/or benefactor. 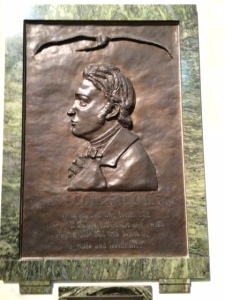 The memorial to S.T. Coleridge in Jesus College chapel. The text is from the Ancient Mariner: ‘He prayeth best who lovest best …’

It turns out that he was the latter but not the former. The son of a vicar who was the son of a vicar in Barrow-on-Soar, Leicestershire, Tobias Rustat (1608–94) began his career as an apprentice to a barber-surgeon in London, but the staggering amounts of money that he left to various good causes (including Jesus, of which his father Robert (1567–1637) had been an alumnus) came from his loyalty to the Stuart cause, and his considerable skill at multiplying the perks of a court position, even when the court itself was in complete disarray.

When Basil Feilding (1608–75), second earl of Denbigh, and (more relevantly, nephew of the royal favourite George Villiers, duke of Buckingham), was sent as ambassador extraordinary to the Republic of Venice in 1634, Rustat went too. (Was it his barbering or his surgical skills that made him useful?) When Feilding (by all accounts good at purchasing paintings for King Charles I, but completely incompetent as a diplomat) was recalled in disgrace in 1639, he began to distance himself from the royal party, but his erstwhile barber-surgeon moved deeper into the court, becoming servant to the young second duke of Buckingham, who, after his father’s assassination in Portsmouth in 1628, was being brought up alongside Charles, Prince of Wales. 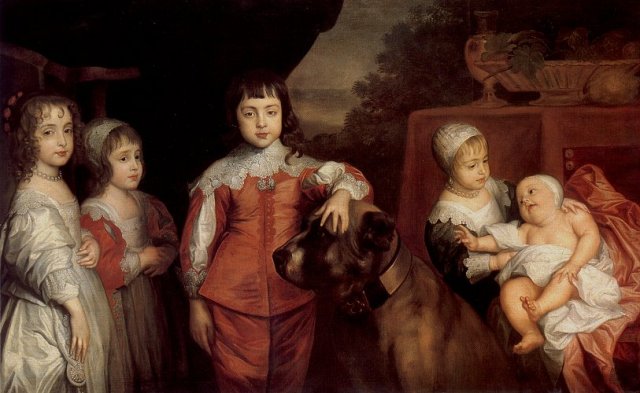 One version of Van Dyck’s famous portrait of the children of Charles I.

George Villiers, 2nd duke of Buckingham, as a young man.

Feilding’s secretary, Thomas Raymond, in his autobiography (published in 1917 by the Camden Society) had remarked that although Rustat was a sober and pious man, who shunned the ‘opportunities of femenyne debaucheries’ offered by Venice, he was ‘so unlearned that he needed help in his writing and indicting’. However, he proved his worth and loyalty during the Civil War, acting as a secret messenger for the royal family. (Raymond later met him in Dover, where Rustat was conveying a letter, rolled up inside his fashionable walking cane, from the exiled Queen Henrietta Maria to the king at Oxford.)

According to a family tradition, Rustat was involved in the failed escape of Charles I from Hampton Court in 1647. He also apparently saved the life of Buckingham when in a skirmish the latter’s helmet got caught in a tree, and, again with Buckingham, was a companion of Charles II when he went to Scotland after Charles I’s execution (which according to tradition Rustat had witnessed).

After the battle of Worcester, Rustat was entrusted with the king’s sword and buff coat: perhaps surprisingly, five weeks later he was allowed to leave the country and join Charles in exile. Effectively, he acted as the king’s valet, becoming ‘Yeoman of the Robes’ (a post to which he had bought the reversion many years previously) in 1659. Even in exile his position entitled him to a great many perquisites: he got a fee every time a knighthood was granted, for example.

A later print of Tobias Rustat in his prime. There is a portrait of him in Jesus College Hall.

At the Restoration, he was made under-housekeeper at Hampton Court (the perks there included being able to petition for the property of convicted murderers, which was automatically forfeit to the Crown). Unlike several of his fellow courtiers, he did not spend his money but invested it (in the new Royal African Company, whose trade with west Africa was largely in slaves, for example): he even became a lender to his more spendthrift colleagues at Charles’s notorious court.

But what he mostly did was give it away (he had no immediately family, and luxurious board and lodging came with the job). In 1667, he gave an endowment (the first of its kind) to Cambridge University Library, for purchasing ‘the choicest and most useful books’, and four years later (probably not coincidentally, as the Jesus College website notes), when Buckingham was Chancellor and Charles II made his first visit to the city, he presented his father’s college with £2,000 for scholarships for orphan sons of clergymen.

Rustat also sponsored the rebuilding of St John’s Hospital and the Bellott almshouses at Bath, and also gave money to St John’s College, Oxford, to support indigent fellows and students. In London, he contributed to the rebuilding of St Paul’s after the Great Fire, and also to the construction of the Royal Hospital at Chelsea. (It was reported that the king complained that there was ‘nobody in this age for building hospitals but Toby and himselfe’.)

He also demonstrated his loyal enthusiasm for the Stuarts by commissioning from Grinling Gibbons two statues of Charles II, one at Windsor (cast by Josias Ibach) and one in the Figure Court of the Royal Hospital (now startlingly gilt, and which I have seen heaven knows how many times in Chelsea Week without knowing either the artist or the benefactor), and one of James II, originally outside the old Palace of Whitehall, now in Trafalgar Square, in front of the National Gallery. 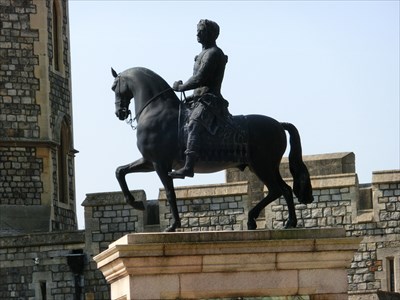 Gibbons’ equestrian statue in the Upper Ward at Windsor Castle.

Charles II in the Figure Court of the Royal Hospital, Chelsea.

James II, outside the National Gallery.

Rustat seems to have planned his own memorial (there being no close relatives to do it): Gibbons carved the stone, and Sir William Dugdale, the great antiquary, wrote the epitaph.

TOBIAS RUSTAT, YEOMAN OF THE ROBES

TO KING CHARLES THE SECOND,

WHOM HE SERVED WITH ALL DUTY AND FAITHFULLNESS,

IN HIS ADVERSITY AS WELL AS PROSPERITY.

THE GREATEST PART OF THE ESTATE HE GATHERED

BY GOD’S BLESSING, THE KING’S FAVOUR, AND HIS INDUSTRY,

HE DISPOSED IN HIS LIFETIME IN WORKES OF CHARITY;

AND FOUND THE MORE HE BESTOWED

UPON CHURCHES, HOSPITALLS, UNIVERSITIES AND COLLEGES

AND UPON POOR WIDOWS AND ORPHANS OF ORTHODOX MINISTERS,

THE MORE HE HAD AT THE YEAR’S END.

NEITHER WAS HE UNMINDFUL OF HIS KINDRED & RELATIONS,

IN MAKING THEM PROVISIONS OUT OF WHAT REMAINED.

HE DIED A BACHELOUR

[The 1693 date is Old Style – 1694 in New.] As well as the money he had given away, he left a substantial amount of money (unfortunately the Jesus account gives one version, the excellent summary of Rustat’s life by J.C.T. Oates another, and the ODNB yet another), mostly to his great-nephew, another Tobias Rustat. Among the items bequeathed to his namesake were a cabinet formerly owned by Charles I and three pairs of tennis socks.

The memorial can still be seen today, in Jesus College chapel. When I visited the other day, the ante-chapel was empty of chairs, which usually diminish the effect of the enormous size of this space, and somebody was practising on the organ as I wandered round. The floor and many of the walls contain memorials and grave markers of the college’s great and good, but Tobias Rustat sits high up on the west wall in solitary splendour, which, as the college’s greatest benefactor, he undoubtedly deserves.

The memorial’s height on the wall can be gauged from its distance from the ceiling, painted to a William Morris design in the nineteenth century.

The memorial to Edmund Boldero, Master of Jesus from 1663 to 1679, another passionate Royalist who had been ejected from his fellowship by Parliament.

10 Responses to The King’s Faithful Servant