Object of the Month: October

I came across this fragment in the online catalogue of the Fitzwilliam Museum while looking for something else. Ha! Corinthian, I thought, in my ignorant way, but it isn’t: it’s sixth-century BCE Clazomenian, as classified  (no. 7 in the Tübingen Group) by the great Professor R.M. Cook (brother of the equally distinguished Professor J.M. Cook), whose lectures I recall attending in the old Classical Archaeology Museum in Little St Mary’s Lane, Cambridge, before the library and the casts were whisked off to modernity and Sidgwick Avenue, and the building reverted to Peterhouse. 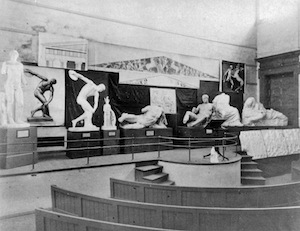 The lecture theatre in the so-called ‘Old Ark’. (Credit: Faculty of Classics, University of Cambridge)

The new Faculty building, with welcoming cast in the doorway.

Clazomenae, I recall, was somewhere in the Greek East, and was the home of Anaxagoras. (As always, I wish I could drag what day of the week it is from my crumbling brain as readily as I do this sort of stuff.) It turns out to be almost exactly halfway down the Aegean coast of Turkey, in the modern province of Izmir, and on the same latitude as Chios. The modern town of Urla (Greek Vourla, birthplace of the poet George Seferis) is near the ancient harbour (now, appropriately enough, site of the University of Ankara’s underwater archaeology research station).

Clazomenian silver coin, with pig in full flight. Do the wings resemble that of the siren?

It was, apparently, one of the first Greek cities to issue silver coinage: this flying pig has very similar wings to that of the creature on the pottery fragment.

Apollo and the swan.

However, more usually, the coins showed Apollo, the defender of the city, or a swan. (Swans pulled the chariot of Apollo on his return in spring from Hyperborea; there were a lots of swans in Clazomenae; and ‘klazo’ may be the Greek word for the cry of the swan: choose your own folk etymology.)

Clazomenae is famous in archaeological terms because of its startling, highly decorated clay sarcophagi. The one below (also in the Fitzwilliam Museum, bought in 1902) was found on Rhodes; another, discovered in the area of the city itself, is now in the British Museum. 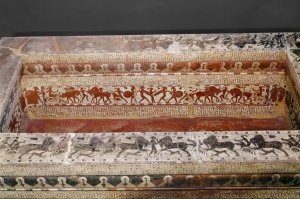 Olive oil was a major export, which may explain why many of the bits of pottery found in Egypt, especially at the sites of Naukratis and Tel Deffeneh, both excavated by Petrie – though Petrie himself believed the fragments to be a local ware – are fragments of small amphorae. Cook explains in detail the process by which the attribution to Clazomenae was made, and also, with characteristic caution, warns against relying too much on stylistic similarities when adding new material to the corpus.

My second error with regard to this fragment was that I assumed it was a sphinx – woman’s head, wings … but it is classed in the online catalogue as a siren. It’s true that to be a sphinx you ideally need the body of a lion, and this figure’s chest is more womanly than leonine. And the sphinx traditionally hunts alone, whereas this lady clearly has a winged companion on her left, and possibly another on her right: serried ranks … (I’ve just looked up this cliché: the verb ‘serry’ means to press close, as in Lat. ‘sera’, lock). On the other hand, sirens are supposed to lurk by the seashore, seducing luckless sailors to doom by the beauty of their song – is the branch-like horizontal bar on the background sea-shore scrub, or even a bit of a passing galley?

The figure is clearly out to seduce, with her earrings, her hair fillet decorated (with embroidery or pearls?) to match the pattern on her wings, and all her feathers neatly interlocking. Is there a tiny trace of a smile on her face? The most famous encounter with sirens is that of Odysseus (Od. 12 45-6): constantly eager for knowledge, and previously advised by Circe, the hero stuffs his crew’s ears with wax and has them bind him to the ship’s mast, with stern orders not to let him free however much he may command, or beg. Early depictions of this incident show the sirens not singing from the shore, but flying around the ship, perching like vultures on the stem and stern, and altogether behaving more like the harpies who tormented King Phineus of Thrace until he was rescued by Jason and the Argonauts.

In this famous red-figure jar, a harpy-like siren is falling into the sea after failing to seduce the Ithacan crew.

Aeneas also encountered harpies, who famously prophesied that the Trojans would be driven by hunger to eat their tables before the end of the journey. (Unlike many riddling prophesies, this turned out well, if not necessarily for King Turnus and the Rutuli.) 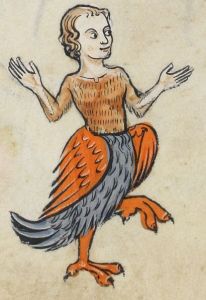 Dante also met them, perching among the suicide-trees of Inferno, Canto XIII. The harpies’ function seems to be not to tear at their victims with their beaks and claws, but to prevent them from eating; similarly, the sirens’ ploy was to lure the men on shore and then – do nothing. Death from dehydration/starvation would follow, but in a more peaceful way than if the harpies were on your case. 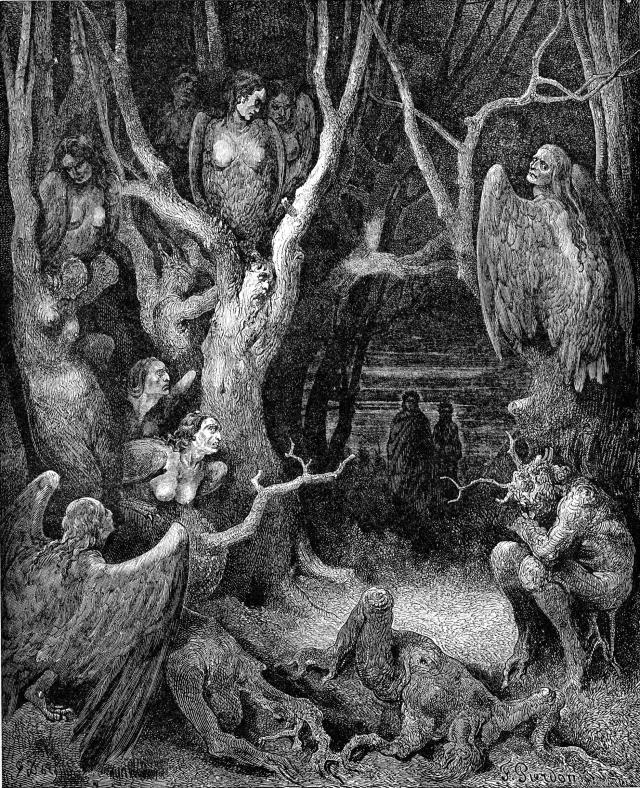 The grove of suicide-trees, in Gustave Doré’s famous illustration of Dante.

Greek tradition has the sirens luring sailors on to land, but the Romans appear to have seen them more as sea creatures (though a spectacular mosaic from Bardo has them singing and playing with their clawed feet firmly on the shore).

Sirens trying to lure a rather stolid Ulysses on shore: mosaic from the Roman town of Bardo in Tunisia.

From this in-water tradition, presumably, come Italian (and Spanish) ‘sirena’, and French ‘sirène’ for mermaid. Hence also the unbridled enthusiasm for sirens among the late Victorian ‘classical’ painters who could get a lot of bare breast into their canvases in the cause of mythology.

A siren and a sciopod, from the Pontifical of Renaud de Bar (c. 1310). (Credit: Fitzwilliam Museum) 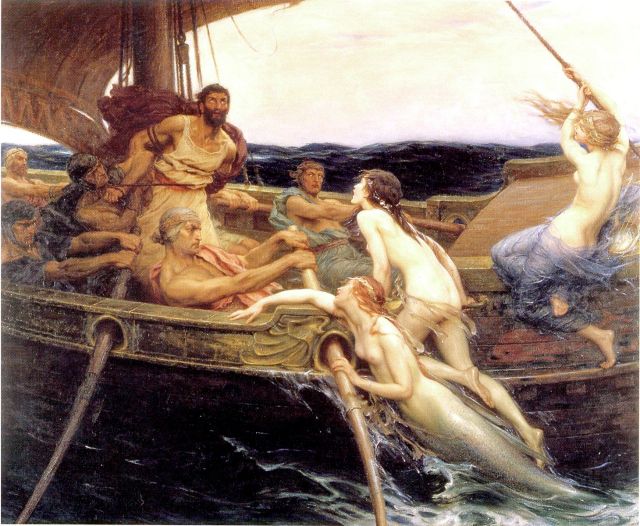 The modern Greek word for a mermaid is apparently γοργόνα, which opens up another line of monstrous enquiry.

A flying gorgon from Kameiros on Rhodes. 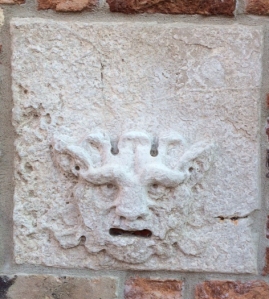 Did the notorious denuncia ‘postboxes’ of Venice (this one from San Martino, close to the Arsenale) derive from images of the Gorgon?

Another coin from Clazomenae, where the flying pig has a gorgon on the reverse.

Winged women appear quite often in Corinthian ware, among other wildlife. It’s interesting that they are placed quite naturally in sequences including familiar ‘real’ animals like bulls, goats, swans and lions. (The latter of course are more exotic, but there is both literary and artistic evidence for Asiatic lions in Greece in the early classical period.)

This amazing Corinthian jar, found in Rhodes, has sirens (at the neck) among other, non-mythological beasts.

And it’s also interesting how much more plausible a chimaera like the sphinx can be when depicted in an already stylised genre like Attic red figure. In this famous image, Oedipus (in his traveller’s hat) and the Sphinx are clearly having a serious conversation, whereas in Moreau’s version (below) both look quite ridiculous (yes, I know it’s Symbolist and all that …). 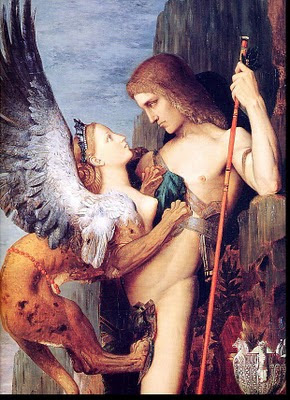 ‘Oedipus and the Sphinx’, the latter defying gravity, by the Symbolist Gustave Moreau (1826–98 ). (Credit: Metropolitan Museum of Art, New York)

Getting back to our siren fragment: it is believed to be from a large bowl (either a krater or a dinos in ceramic typology) used for mixing wine and water.

Presumably a luxury export from Ionia to Egypt, reminding those Greeks who had settled as traders in Naukratis since the seventh century BCE of the homeland, maintaining Greek customs (e.g. drinking diluted wine, not Egyptian beer), and perhaps keeping them abreast of developments in the applied arts back in the ‘real’ Greek world?