I was parking my car outside a friend’s house in leafy western Cambridge when something squidged from above on to the bonnet and disintegrated most messily. I opened the car door and was assailed by a most appalling smell of vomit. What on earth was happening? The aftermath of a wild party for the local jeunesse dorée? An outbreak of projectile vomiting by the local pigeons or magpies? The truth became evident as I picked my way gingerly across the pavement – the ripe fruits of a mature Ginkgo biloba tree were raining down from the branches and splattering on whatever lay beneath.

The ginkgo (given its binomial by Linnaeus in 1771) is a Chinese tree first recorded by Engelbert Kaempfer (1651–1716) the German physician, naturalist and author of both a much-read account (which included a flora of Japan) of his travels during 1683–95 through Russia, Persia, India and east Asia, and also a history of Japan, published in English translation in 1727 by the librarian of Sir Hans Sloane, after the latter had acquired Kaempfer’s unpublished manuscripts. 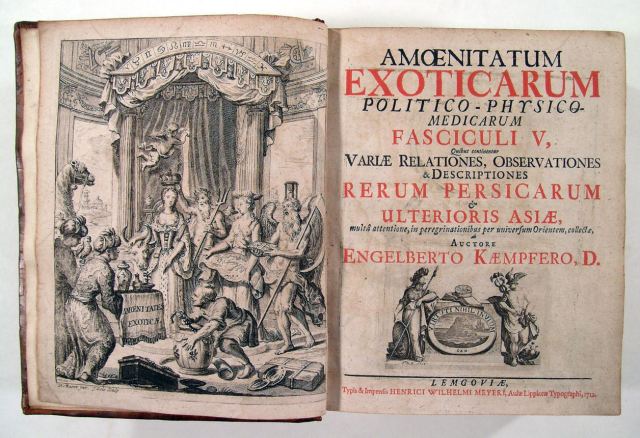 The frontispiece and title page of Kaempfer’s Amoenitatum exoticarum (1712): ‘exotic delights’ from the Orient (including a camel) are presented to Europa.

Seeds brought back by him were planted at the botanic garden of the University of Utrecht, where one still survives, probably the oldest outside Asia. 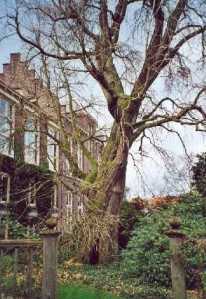 The Utrecht ginkgo in winter.

The tree is also unusual in being in in a phylum of its own (Ginkgophyta), a single class of its own (Gingkoopsida), an order (Gingkoales), a family (Gingkoaceae) and finally a genus (Gingko) of which it is the only living species. There are fossil records of other plants in the order Gingkoales, but none (so far) from later than the Pliocene epoch, i.e. 2.6-odd million years ago. 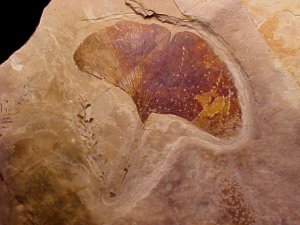 Linnaeus went for biloba because of the distinctive, deeply cut leaves – which apparently inspired a poem by Goethe musing on singularity and duality. 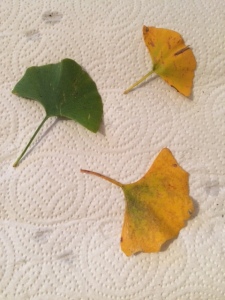 Leaves picked up from around the tree below: only one of them actually shows the characteristic bilobed form.

David Nelson (botanist on Cook’s third voyage, and later cast adrift with Bligh (he survived the incredible voyage but died of a fever in Timor) and J.E. Smith had both named the tree in honour of the botanist and first honorary secretary of the Horticultural Society of London, Richard Salisbury (1761–1829) – both later fell out with him, as apparently did almost everyone he encountered, whether on account of dubious financial dealings or of scientific plagiarism. 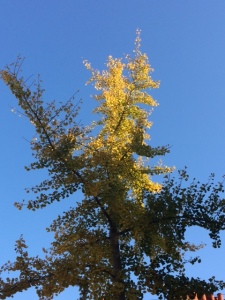 A young ginkgo tree in a Cambridge street.

The word ‘ginkgo’ itself is believed to be Kaempfer’s mistaken transliteration of the Japanese words gin nan, meaning ‘silver apricot’, itself borrowed from the Chinese yin-guo, ‘silver fruit’. (The complexity of the explanation leaves me baffled, but I have to admit that neither my understanding of kanji nor my Mandarin are up to much.) In Britain it is known as the maidenhair tree, as distinct from the maidenhair fern, Adiantum, but possibly so called because the leaves resemble some varieties of the latter? 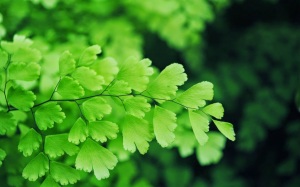 Adiantum capillus-veneris, the leaves of which are lobed like the ginkgo.

A specimen at Kew is one of the remaining ‘Old Lions’ – the trees known to have been planted about 1760 when Kew was the residence of Princess Augusta of Wales, mother of George III and widow of Frederick, Prince of Wales, or Fred ‘who was alive and is dead’. 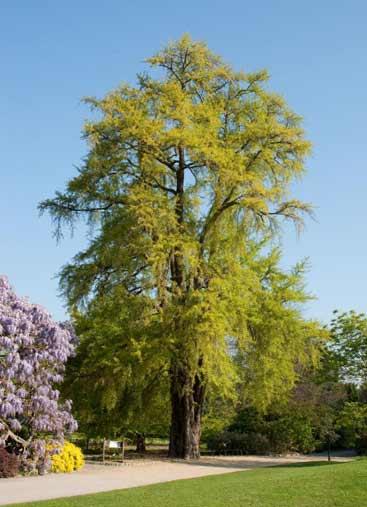 More trees were planted by Sir Joseph Banks in 1773, the year after Augusta’s death, and the ginkgo became popular as an ornamental all over Europe in the course of the next 200 years – while simultaneously in the wild it dwindled and may well be extinct, probably as a result of general deforestation. (In China it was apparently cultivated near temples, and Confucius sat under one to teach.) 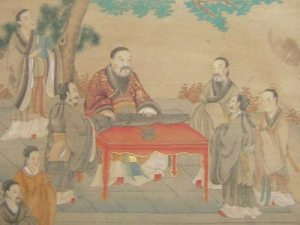 Confucius and disciples under a ginkgo.

Male trees are preferred to females for ornamental growth, largely because of the repulsive scent and overall mess of the fruit,  though these – yellow, cherry-sized, and bloom-covered like plums – are edible if you can overcome your repulsion at the smell. 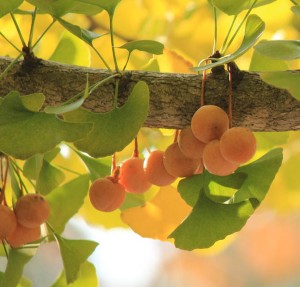 The ripening fruit: it later acquires a plum-like bloom.

The female trees do not start bearing fruit until after at least 20 years, and may not reach sufficient maturity until they are over 35 years. I did not have a tape measure with me at the time of my encounter, but I couldn’t get my arms around the trunk, and the roots have raised the tarmac and paving in its immediate vicinity, suggesting that my friends’ tree must be quite old – though the oldest recorded specimen is about 3,500 years …

The seeds (‘ginkgo nuts’) are also edible, though they need to be cooked, as they contain a toxin (4′-O-methylpyridoxine). They can be served roasted, or in bird’s-nest soup(!). But, as you will find when you google the name, the parts of the ginkgo most sought after are the leaves. They have apparently been long used in Chinese medicine, and research over the last 50 or so years has suggested that they contain something that will boost your child’s intelligence and ward off your own dementia.

Tall, graceful, with leaves the freshest green in spring, and the deepest yellow in autumn, it is a spectacular tree, and I would plant one if I had room – though I would definitely go for a male.