Object Of The Month: November

In the Western Christian churches, Advent is the period of four weeks (or so) before Christmas Day, beginning on the Sunday closest to the feast of St Andrew on 30 November. This year it falls on 27 November, and may or may not coincide with an exciting event in the wider Hedgehog family (though, as far as I know, a star has not risen in the east on this occasion).

Adventus in Latin means ‘arrival’, and is a translation of the Greek παρουσία, which means the same thing (in particular the feted arrival of a ruler: just by chance, the adventus of Theodosius the Great at Constantinople happened on 24 November 380), but in the New Testament is also used to mean the Second Coming of Christ. Thus Advent is a time not only to celebrate the birth of Christ but also to contemplate His Return. In the early church, it was apparently the period of four weeks between the conversion of a pagan and his/her ability to receive the Eucharist for the first time – Christmas Day being the most propitious day for this. Morever, from the end of the fifth century, the four weeks before Christmas were marked by fasting: three days a week from 12 November until Christmas, giving a total of forty days in the period, sometimes referred to as St Martin’s Lent (St Martin’s Day is 11 November).

San Martino is a children’s festival in Venice, with special cakes showing the saint on his horse, with his sword all ready to divide his cloak with a beggar.

There are many folk traditions across Europe connected to the Advent period, some of them having evident pagan origins. According to William Hone (1780–1842), extremely radical publisher (inter alia, he worked with Edward Wakefield on asylum reform) and antiquarian, in Normandy, farmers used to send their children (or those of their neighbours) into the fields and orchards, chanting an apotropaic song:

(‘Mice, caterpillars[?], and moles, get out, get out of my field; I will burn your beard and your bones: trees and shrubs, give me three bushels of apples.’)

and setting fire to bundles of straw to drive out vermin: pragmatic, but also recalling the midwinter fire festival of Yule (see Frazer in the third edition of The Golden Bough on this; and also the great and good John Brand, who quotes extensively from Mrs Elstob’s commentary on the Anglo-Saxon homily on the birthday of St Gregory), and the ancient tradition of wassailing the fruit trees at new year. 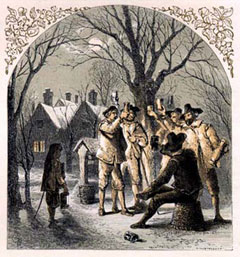 A Victorian image of seventeenth-century wassailing among the apple trees.

Sadly, Brand does not have a section on Advent customs, referring only in passing (on St Valentine’s Day) to ‘love divinations’ which ‘appear to have been practised upon the Continent in Advent’. These involve (in a Latin poem which Brand does not translate) lascivious girls and sprouting onions … all very pagan and unseemly, no doubt.

In Italy, bagpipers from Calabria used to arrive in Rome and play in the streets before images of the Virgin: this became a popular subject for prints.

And of course, in all traditions there are music and songs appropriate specifically to Advent rather than to Christmas in general: ‘O come, O come, Emmanuel’ (or its Latin version) is probably the best known, along with Charles Wesley’s ‘Lo! He comes with clouds descending’ (the origin of the tune is contested: this is John Rutter’s arrangement), which clearly refers to the Second Coming; and of course, ‘Wachet auf’ Philipp Nicolai’s great hymn (preferably in J.S. Bach’s harmonisation). There is also the Advent prose, ‘Rorate coeli desuper’, and the so-called ‘O Antiphons’, sung at Vespers in the last seven days.

But to our object. The first advent calendar was made (along with a great many other Christmas traditions – thank you, Prince Albert!) in Germany. The German Lutheran tradition was to count the days of Advent with chalk marks on a door, or the lighting of candles (Advent wreaths with candles continue this tradition), 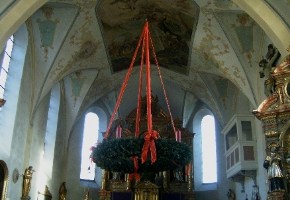 A spectacular Advent wreath in a German church.

and it is thought that a printer, Gerhard Lang, produced the first commercial one, inspired by the cardboard sheet with pictures attached that his mother had made for him.

Lang produced the familiar version with little doors (with either pictures or Bible readings behind them) until the Second World War, when card and paper shortages prevented their manufacture, but the tradition was renewed in 1946 by Richard Sellmer Verlag, who continue to manufacture both religious and festive designs. (Of course, they do not strictly measure Advent, as this is a moveable feast, but the first 24 days of December.) Another famous German manufacturer is Coppenrath, who this year offer a calendar containing aphorisms (in German) from Jane Austen for every day.

Apparently, the Advent calendar’s popularity in the USA really took off in the 1950s, when President Eisenhower was photographed alongside his grandchildren with one. Since then the spin-offs into chocolate, cosmetics, superheroes, Hello Kitty, Haribo sweets, or the ‘Yankee Candle Holiday Party Advent Calendar’ (the latter comes with these fragrances: ‘All is bright, festive cocktail, christmas cookie, macaron treats, snowflake cookie, star anise and orange, and christmas eve’ [sic]) are a source of great enthusiasm or deep sadness, depending on your viewpoint. (Here is the Yankee Candle, to prove I’m not joking.)

I still remember my first Advent calendar: it was given to my by an elderly neighbour who was a Christian Scientist: it was cherubs and lambs around a crib in the snow, with lots of rapidly tarnishing glitter, and I was enchanted. (From the same source I also had ‘Angel Chimes’, now somewhat patched together, but the angels still belt around ringing their bells.) 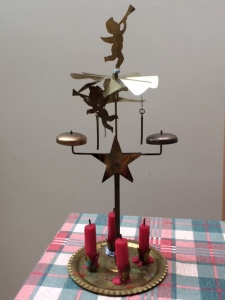 The angel chimes. (Memo to self: clean up, and buy new candles.)

I have also kept some of the best calendars from my children’s past, including the ‘Cats’ Christmas’, a Victorian cat family’s preparations for the festive season, which opens right out on Christmas Eve. 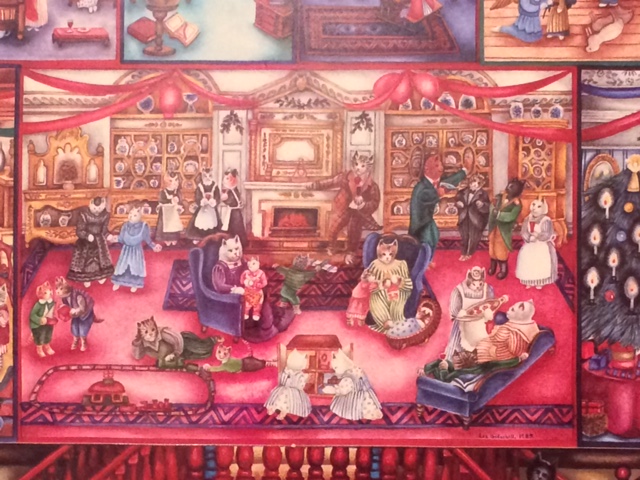 I love the simplicity of this one.

The details in this one can be pored over …

In my opinion (not, of course, biased or anything), the best of this year’s bunch is this one,

coming from a Fitzwilliam Museum near you. Greetings-card-sized calendars have become popular recently, and they are a good way of introducing the tradition to small children.  I bought a lovely small one in Leipzig a few years ago, which I have managed to lose, alas. 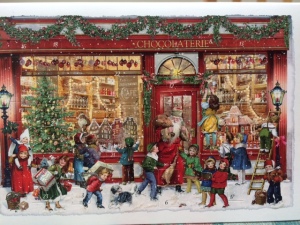 Calendar cards: these two will be handed over later today. 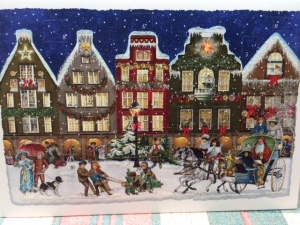 The next thing, of course, is ‘Mince-pies and Plumb-porridge’, on which Brand is very eloquent (weird goings-on in Wisbech, to name but one item), but I must get a move on – I’ve already missed Stir-Up Sunday (20 November) …

3 Responses to Object Of The Month: November