I was thinking in terms of primroses, as mine (in a very sheltered position under a south-facing wall) are flowering bravely, but I haven’t seen any elsewhere yet, so I though I would go for winter aconites, which flower reliably from late January through February, more or less regardless of the weather and temperature. 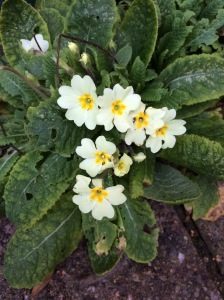 My primroses in early February. 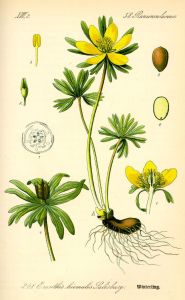 An early nineteenth-century botanical illustration, showing the plant, with Salisbury as the namer.

Salisbury was a somewhat notorious character who briefly had the gingko tree named after him, but I hadn’t realised that his name wasn’t originally Salisbury: he was born a Markham, and the son of a Leeds cloth merchant. By his own account, he changed his name in order to inherit the fortune of a distant relative of his mother who shared his passion for flowers, but doubt was later expressed about this, and he was never able to quash such doubts by producing documentary evidence.

Richard Salisbury, who seems to have perfected the gentle art of making enemies, in 1817, by William John Burchell.

Why is winter aconite called ‘aconite’, when it has no relation to the ‘real’ aconite (Aconitum napellus, formerly lycoctonum, literally ‘wolf-killer’, or monks-hood, wolf’s-bane, devil’s helmet, leopard’s-bane, mouse-bane etc., which is seriously dangerous) except the rather remote one that they are both members of the Ranunculaceae family? 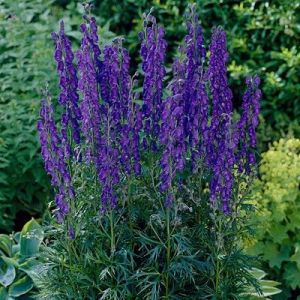 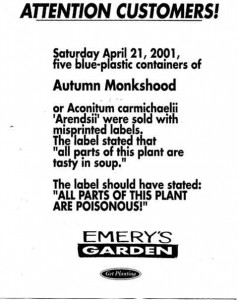 The useful website ‘The Poison Garden’ points out that the use of the name goes back at least to John Gerard’s Herbal, where he calls it ‘Aconitum hyemale or Hibernum, or winter Aconite’. The caption to the illustration is ‘Aconitum hyemale. Winter Woolfes-bane’. 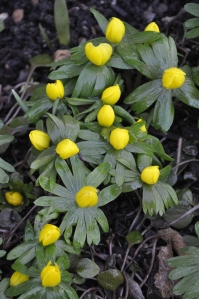 Gerard goes on to state that ‘It growth upon the mountains of Germany: we have great quantitie of it in our London gardens.’ He compares it with the Aconitum described by Theophrastus, which is a deadly poison to which no antidote was known. ‘Athenaeus and Theopompus write, that this plant is the most poisonous herbe of all others’. On the other hand ‘it is reported to prevail mightily against the bitings of scorpions, and is of such force, that if the scorpion passe by where it growth and touch the same, presently he becommeth dull, heavy, and senseless, and if the same scorpion by chance touch the white Hellebor, he is presently delivered from his drowsinesse’. Moreover, ‘Joachimus Camerarius, now living in Noremberg, saith, the water [from steeped leaves, or sap?] dropped into the eies ceaseth the pain & burning.’

It is possible that the leaves resemble those of the wolfs-bane enough for a sort of guilt by association (or the doctrine of signatures?). 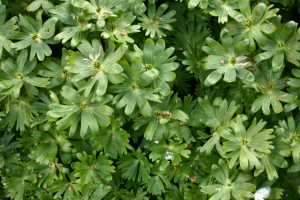 Leaves of Eranthis (above) and Aconitum (below). 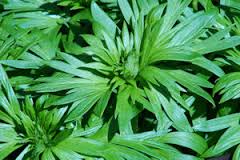 But in fact there are no modern cases of harm though ingestion to either humans or animals, and Eranthis does not appear in any lists of poisonous plants (though it maintains the reputation of being dangerous regardless). It seems therefore that Gerard may have been wrong in assuming that his Aconitum hyemale was identical with the poisonous plant describe by Theophrastus; or that Theophrastus and his successors were wrong about the poison? 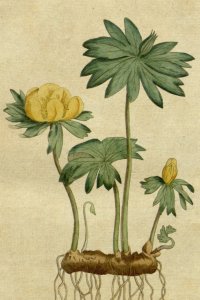 Eranthis on a plate from Curtis’s Botanical Magazine, 1787.

Eranthis hyemalis is common as a wild plant in southern Europe (‘the mountains of Germany’ seem a little wide of the mark). There are seven other species (two of them with white flowers) found from Turkey (Eranthis cilicica, which may in fact be a subspecies of hyemalis) to Japan. 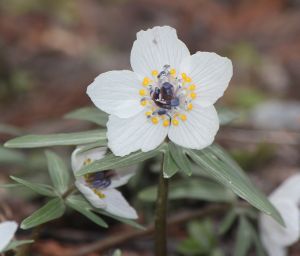 Not a native to the UK, then, but clearly widely available for cultivation at least since Gerard’s day. Their popularity is undoubtedly because of their frost-hardiness – they do not succumb or rot under snow – and their reliable early flowering. 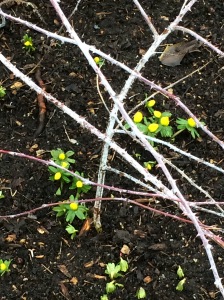 They are easy to naturalise in the right conditions – in their native habitat they are forest-floor plants, blooming under deciduous trees, and the leaves die back after a couple of months. It occurs to me that I have never consciously noticed their seeds – though the pods are in fact quite spectacular – and although seeds can be bought, propagation is normally through the tubers, which ideally should be planted in the green. 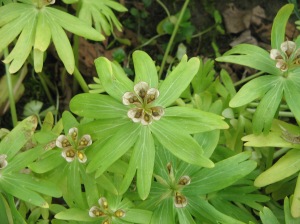 The are extremely responsive to light levels, the globular flowers opening on very bright days, but in some ways the closed flowers – little round beads of brightest buttercup yellow – are more effective as a cheering sight when the rest of the garden (apart from the white of the snowdrops) is bare of colour.

1 Response to Plant of the Month: February 2017