As I never cease to remind everyone, everything is connected to everything else. This was once quoted in the immortal Yes Minister: as I recall, Sir Humphrey asks Bernard ‘Who said that?’; Bernard: ‘The Cabinet Secretary?’; Sir H: ‘Almost right, Bernard – it was Lenin.’ Last week’s instance was the unexpected link between the Magnolia figo in the botanic garden at Lucca and a funerary monument in the church of Santa Croce in Florence.

The train from Lucca (whence we escaped just before the G7 lock-down, which we had previously been unaware was happening) took us through an almost endless series of tree nurseries, full of ranks of Photinia, cherry trees, cypresses, olives – in fact, everything from Abelia to Zizyphus, as one website  I subsequently looked up proclaims. We went through Pistoia and Prato, of which I hoped for spectacular glimpses, naively forgetting quite how grim any arrival by train in London is, let alone Cambridge (though the latter has some excuse, as the station was deliberately placed just over a mile from the city centre, in a vain attempt to protect the morals of the undergraduates from the sinful temptations of the Metropolis). 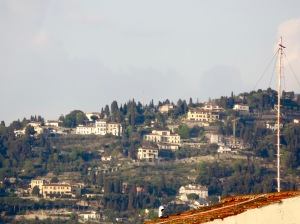 A room with a view …

Florence’s train station is in the heart of the city, and a brisk trot took us to our hotel (where we had a room with a view, admittedly of the hills rather than of the Arno, but better than the blank wall of an adjacent building). I was totally flabbergasted by the crowds: our previous visits had been out of season (admittedly a relative term in any tourist hotspot), and – naïve again – I had not thought that things would be that busy before Holy Week. But as it happened, our plans this time included neither the Uffizi nor the Accademia, so we didn’t do too badly.

I had been to the Boboli Gardens before, but only in winter, and had never been inside the Pitti Palace, so we tried both. 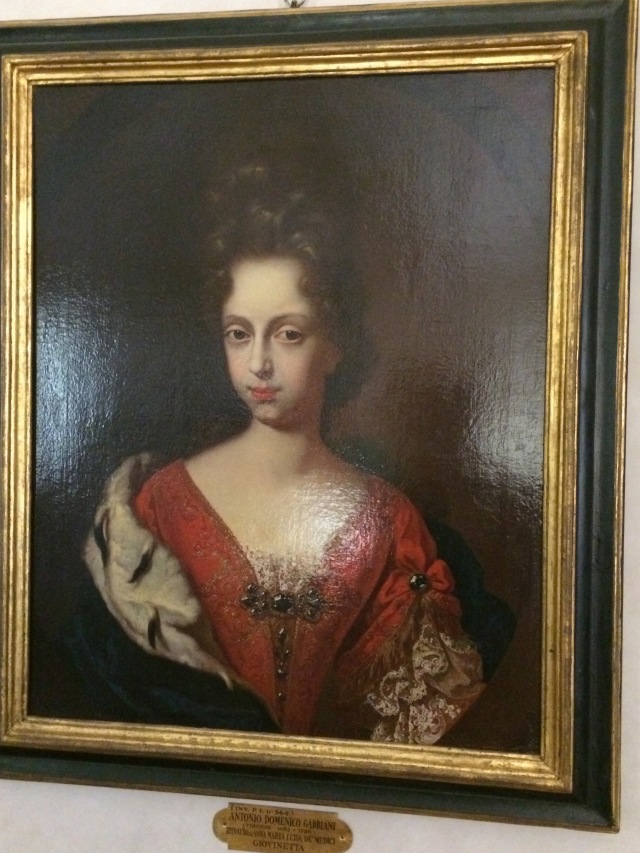 I found the latter a rather depressing experience – not so much all that Stuff, of which in general I am a great fan – but the endless repetition of all that Stuff. The later Medicis clearly had to have numerous  virtually identical duplicates of all their pieces – jewellery, silverware, ceramics, jade, coral, reliquaries – and the glut became rather oppressive. 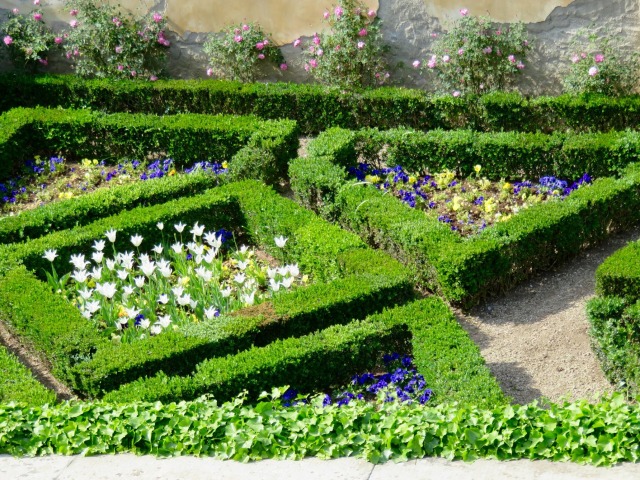 Tulips and violas in the box hedges immediately below the terrace of the Boboli Gardens.

Out into the sunshine of the gardens, of which the almost perennial green is relieved at this time of year by blossom – formal bedding below the terrace, wisteria, fruit trees, Rosa banksiae, and on one steep bank, masses of wild flowers. 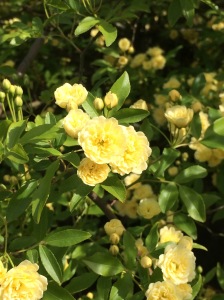 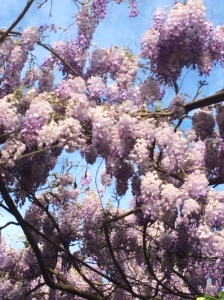 A Wisteria chinensis, one of several … 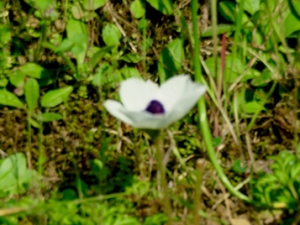 A single, perfect, white anemone, in a bank of wild flowers.

A grey heron ignoring the threat of Neptune’s trident provided entertainment for the visitors, and there were swooping, screeching swifts and house martins too, though no swallows yet. 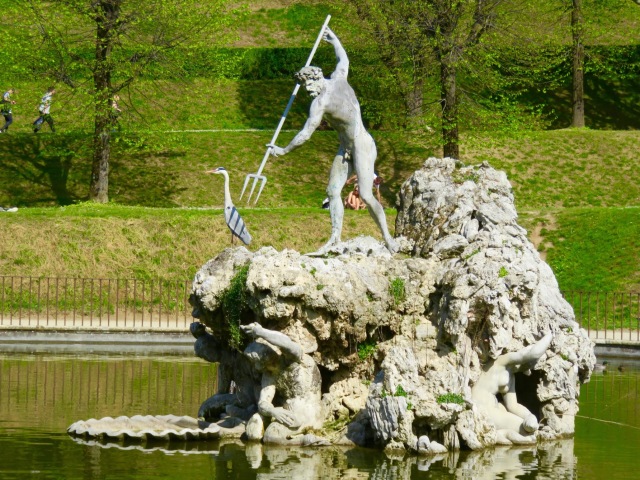 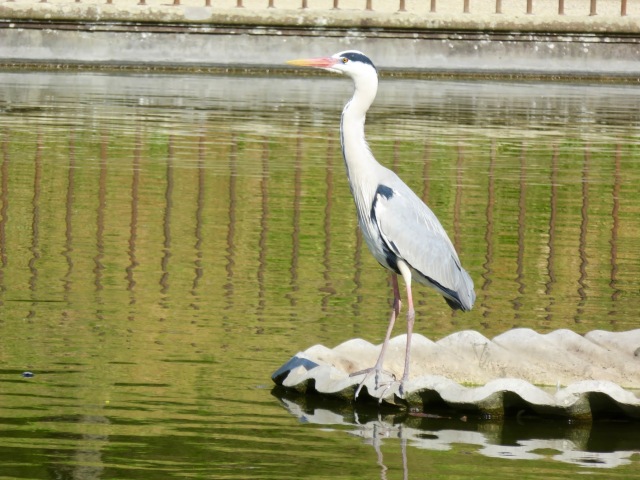 … but the heron moves out of range, just in case. 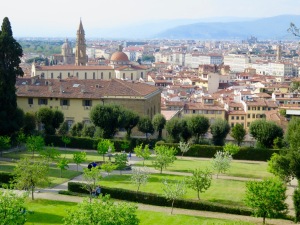 The view across the gardens to the city.

Two sites and sights new to us were the National Archaeological Museum and the Orto Botanico, conveniently quite close to each other. My early enthusiasm for the Etruscans (fostered by another naïve view – possibly the only thing I have in common with D.H. Lawrence – of their happy hedonism as opposed to the dour, brutish militarism of Rome) was revived in wandering around this superb collection.

An Etruscan brooch, with ducks in a row.

Especially striking was the metalwork, with the detail on ornamental pieces picked out in minute grains of metal, but there was so much to look at that after a few hours with the Etruscans and the Egyptians (that collection was formed from finds brought back from Egypt by Champollion and Ippolito Rosellini in 1828–9), we gave up on the Greeks and Romans upstairs and went to the Botanic Gardens instead.

The first foundation of the Orto Botanico occurred in 1545, when the Grand Duke Cosimo I (1519–74) purchased land from a Dominican nunnery to raise plants for the medical faculty at the university. (After Padua and Pisa, it is claimed to be the oldest such garden in Italy.) 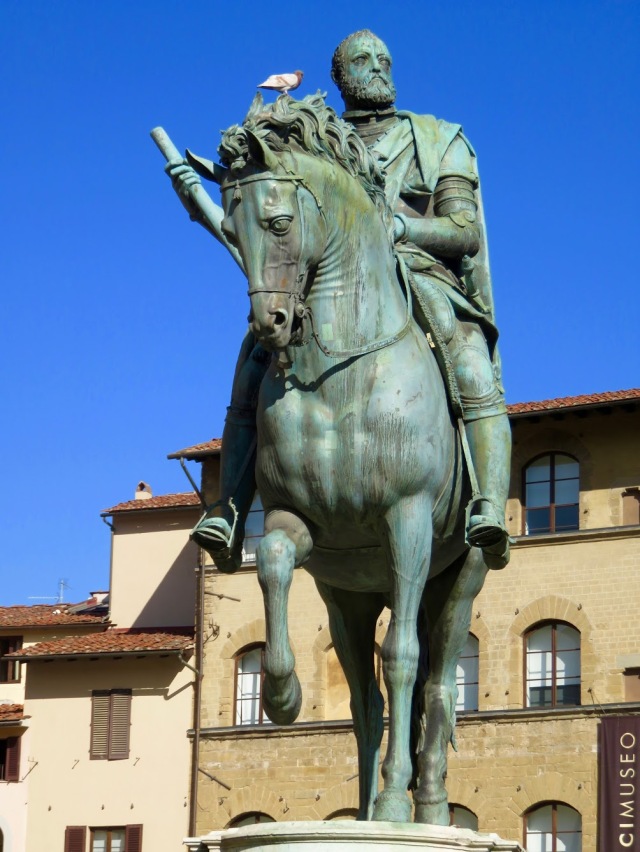 Cosimo I, with added pigeon.

His descendant Cosimo III appointed the distinguished botanist Pier Antonio Micheli (1679–1737) as its director in 1706, and under his care the collection was augmented by many of the exotic plants then being discovered outside Europe. One of the oldest surviving trees in the garden is a yew planted in 1720 by Micheli himself. 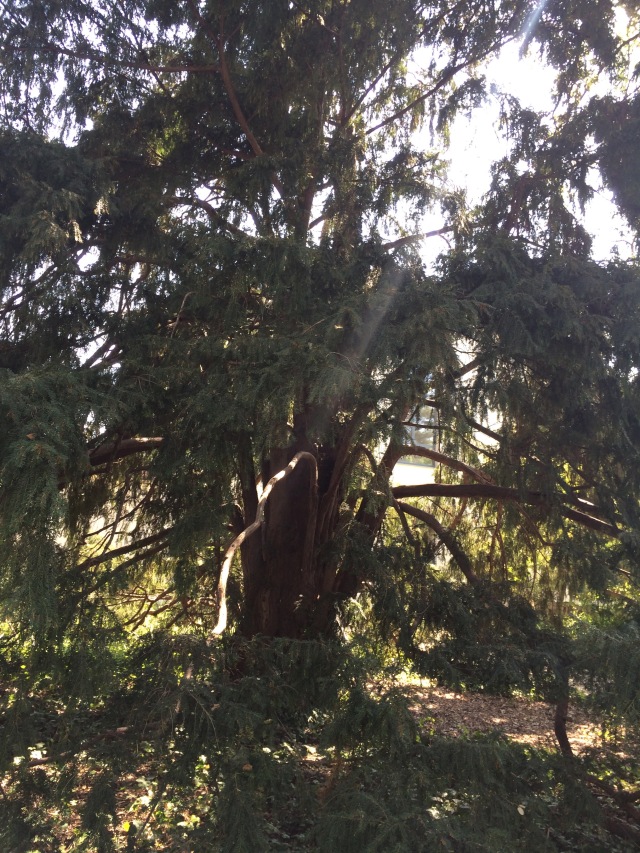 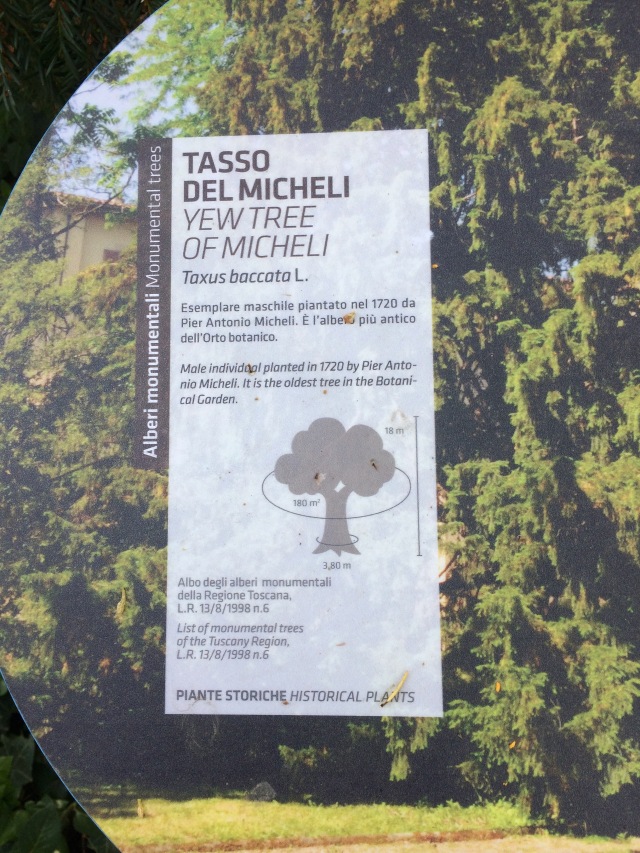 … and its special label.

And lo, later the same day, mooching round Santa Croce, that amazing space in which the sublime frescoes of Giotto and his school are juxtaposed with mostly grotesque and over-elaborate memorials to the likes of Michelangelo, Machiavelli, Galileo and Dante (no mention in the 1829 cenotaph of the latter that he was driven out of Florence and is buried in Ravenna), I came across the funerary monument to Micheli. 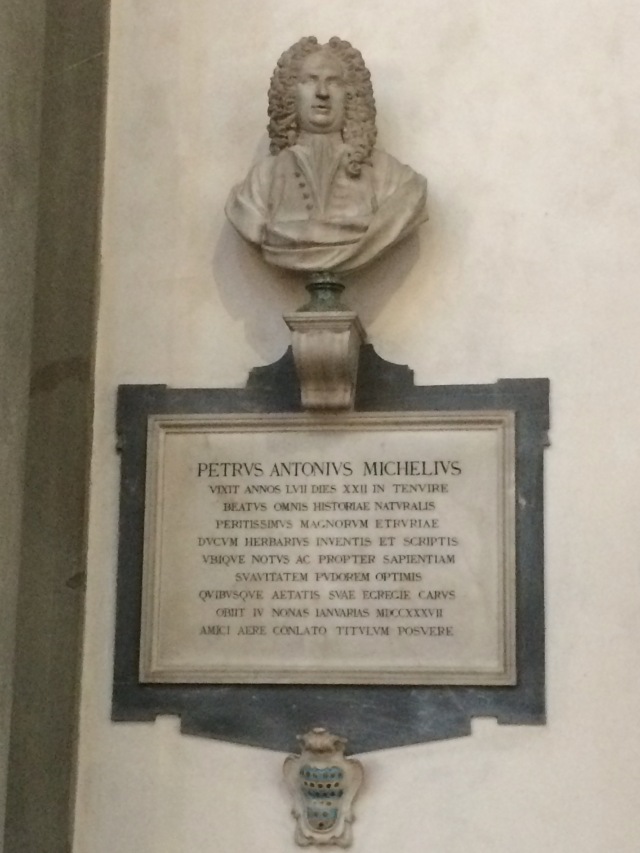 The monument to Micheli in Santa Croce, Florence.

The beautiful Magnolia figo which I admired in Lucca was named Liriodendron figo by its discoverer, but reclassified by Sprengel as Michelia figo. It was only in 2006 that it was decided that this species is a magnolia, though many other plants in the genus Michelia (family Magnoliaceae) have stayed there. All these flowering trees are lovely (though, sadly, many are endangered in the wild), and a worthy living memorial to Micheli the tree-planter.

Another spectacular eastern tree in the garden is Zelkova serrata, named by Thunberg: this specimen was planted in 1891. 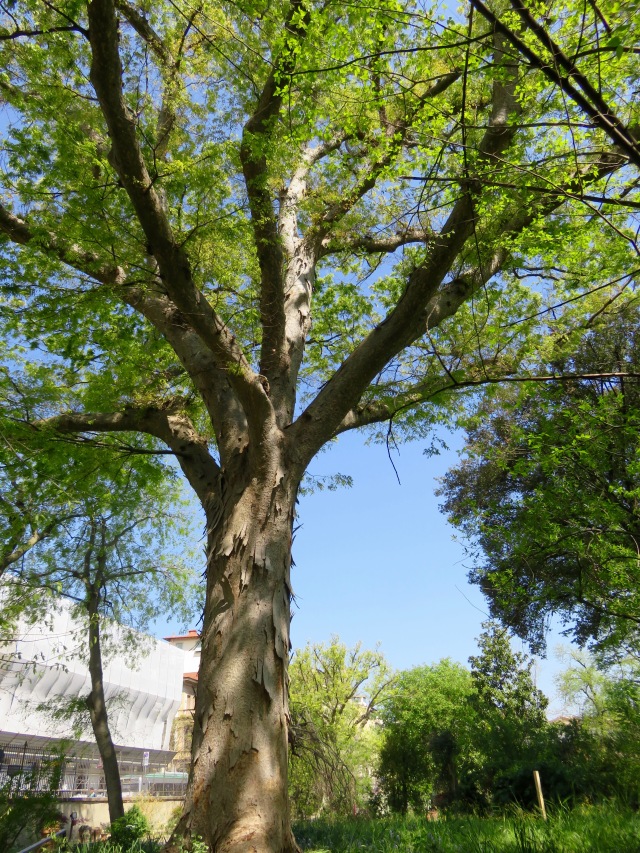 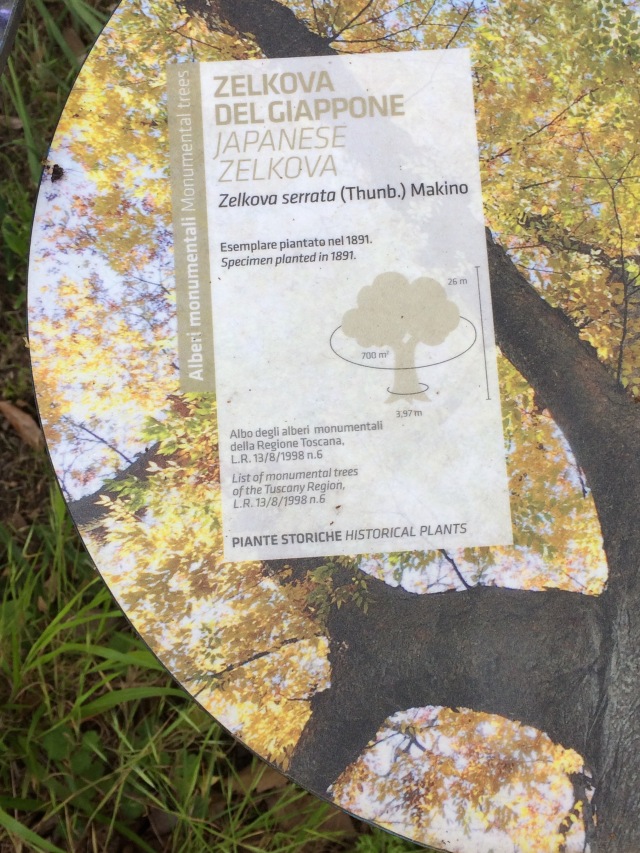 … and its special label.

As well as the serrated foliage, it has beautiful bark, which splits in a most spectacular manner. 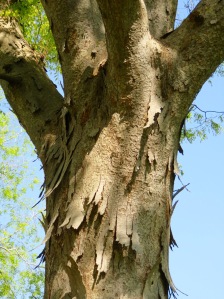 The Zelkova family is elm-related, and species exist as far west as Sicily (where a shrubby tree, Zelkova sicula, discovered only in 1991, is severely endangered by browsing goats). The garden also has a Caucasian zelkova (Zelkova crenata, date of planting unknown, but it’s huge). 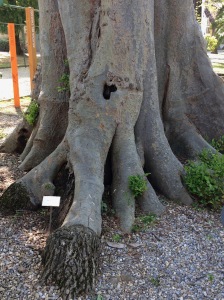 It is apparently from the Caucasus that the name comes: in Georgian ძელქვა (!), pronounced ‘dzelkva’, and allegedly meaning ‘rock-bar’ (the wood is very hard and is used for building).

And a final, non-botanical coincidence. I wrote recently about the newly revealed reverse side of the ‘Virgin and Child’ by Pietro di Niccolò da Orvieto, which apparent imitates a marble panel. In Santa Croce, I was excited to see similar panels at the bottom of the fresco showing scenes from the life of St John the Evangelist in the Peruzzi chapel. 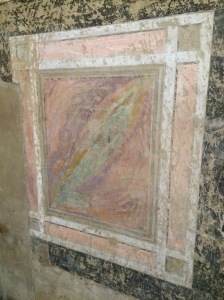 A ‘marble’ panel in the Perruzi chapel.

An interesting parallel – though I don’t know how common this quasi-architectural motif was in either fresco or panel painting?

6 Responses to Only Connect