I was picking stems of my Deutzia to bring indoors (an activity which presents a rather more domesticated and delightful image of the châtelaine of Château Hedgehog than the reality), when it occurred to me that although I have been enjoying the beautiful (though sadly unperfumed) spring blossom of this shrub for more than twenty years, I had no idea who Mr (Herr, Signor, Monsieur) Deutz was (though it was a safe bet that the eponym was a man).

I have had the plant for so long that (a) the label has faded beyond recognition; (b) it dates back to the palmy days when I didn’t have to write things down because I had a memory: so I am not completely certain what species it is, but the description it matches most closely is D. longifolia ‘Veitchii’, which is a happy coincidence, since for some years now I’m always looking out for Veitch introductions. (It’s one way of getting out more.) 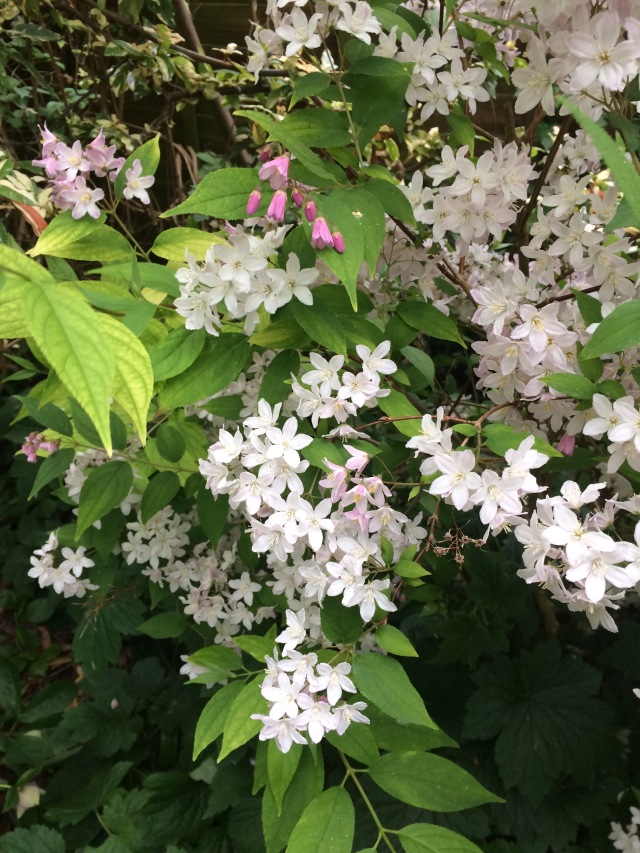 Upon enquiry, I discovered that the eponym of my plant was one Johann van der Deutz, an alderman of Amsterdam who was a friend and financial backer of Carl Pehr Thunberg (1743–1828), who named the plant in his Nova genera plantarum of 1781. Born in the same year as Sir Joseph Banks, in Jönköping, Sweden, Thunberg was a pupil of Linnaeus, who encouraged him to travel. In Amsterdam, he met the Burmans, father and son, both botanists, of whom the son, Nicolaas, had also been taught by Linnaeus, and they in turn introduced him to Laurens Theodore Gronow (1730–77), aka Laurens Theodorus Gronovius, from Leiden, another botanist son of a botanist, Johann Frederik (1690–1762), who in turn had been a patron of Linnaeus. (Stick with me on this …) 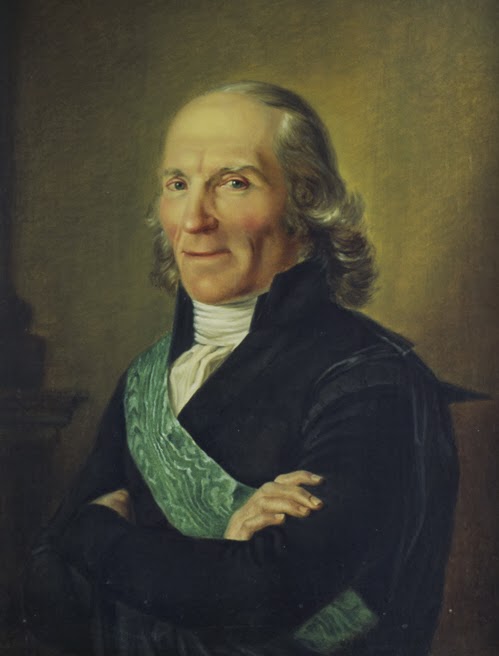 This is the most famous image of Carl Pehr Thunberg; now owned by the University of Uppsala, it launched a thousand prints.

As well as studying the collections at Clusius’s Leiden Botanic Garden (where I’m going soon, yippee!), Thunberg also learned Dutch. Gronovius and the Burmans urged him to travel on, to the Dutch possessions in either the East or the West Indies, to collect exotic plants for Leiden. Their influence enabled him to join the Dutch East India Company (V.O.C.) as a ship’s surgeon, and in 1771 he set off in a V.O.C. ship for the Cape of Good Hope, on his way to the Far East.

The results of three years of study and exploration at the Cape were eventually published in Flora Capensis: Sistens plantas promontorii Bonae Spei Africes, of which three fascicles appeared between 1807 and 1813. (The title was taken up by William Henry Harvey (1811–66) and Otto Wilhelm Sonder (1812–81), who in 1860 began a series of volumes which was finally completed under the editoral direction of Sir William Thiselton-Dyer (1843–1928), director of the Royal Botanic Gardens at Kew.)

But Thunberg really wanted to go east. At this period, to trade with Japan, you had to be Dutch, and you also had to carry out your trading from the artificial island of Dejima, offshore from Nagasaki, which had first been built for the use of the Portuguese, but between 1641 and the middle of the nineteenth century was used by the Dutch. (See David Mitchell’s novel, The Thousand Autumns of Jacob de Zoet, for a striking portrait of life in Nagasaki at the time.)

Birdseye view of Dejima, possibly by Kawahara Keiga (1786–1860) who produced portraits of the foreigners on the island.

Having perfected his Dutch at the Cape, in March 1775 Thunberg set off for Japan, via Java, and arrived at Dejima in August. He rapidly became the head surgeon for the Dutch community, and began to organise the Japanese interpreters (who were the only people allowed to communicate with the foreigners) to collect plants and other specimens from the mainland; in return he gave them medical advice. As word of his skill grew, the authorities allowed him greater liberty to visit the city and surrounding countryside himself, and he improved his knowledge of the history, culture, and medical practices of Japan. 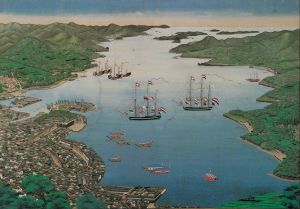 The following year. Thunberg accompanied the Dutch ambassador to the shogun’s court at Edo (Tokyo), and was able to collect plants and other items, from shells and insects to coins (which in theory should not be given to foreigners, in case they fell into the hands of the Chinese, who might forge them and flood the Japanese market) en route. 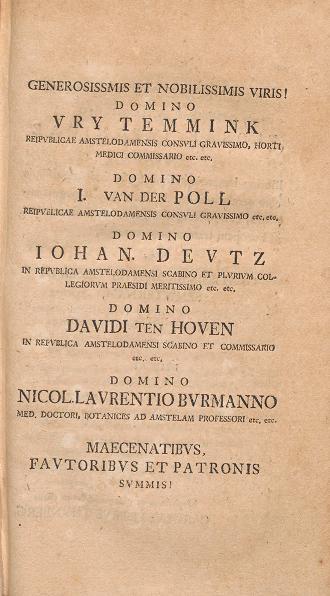 In 1776, Thunberg left Japan for Java, and then Sri Lanka, arriving back in Amsterdam in October 1778. He then travelled home to Sweden via London, where he met with Sir Joseph Banks and had the opportunity to compare his plants with the herbarium of the pioneering Engelbert Kaempfer (1651–1716), who had visited Dejima about eighty years earlier, and had published his own Flora japonica in 1712.

Thunberg’s teacher Linnaeus had died in January 1778; perhaps unsurprisingly, he was appointed professor of medicine and natural philosophy at the University of Uppsala in 1781, and it was while he was holding this chair that most of his works were published, including Prodomus plantarum and Icones plantarum japonicarum, as well as accounts of his travels which brought details of Japanese culture, society and medicine to Europe for the first time. 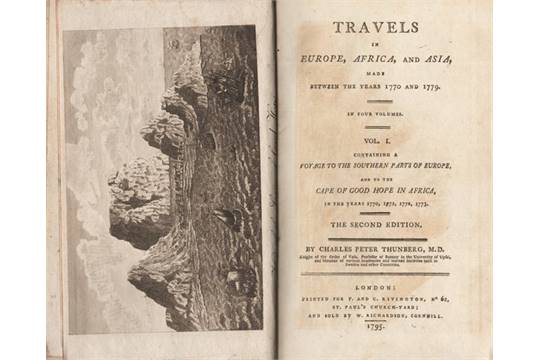 Volume 1 of Thunberg’s Travels, in the English translation of 1795.

The other area in which Thunberg worked almost until his death was that of taxonomy. According to IPNI, he described and named nearly 5,000 species and varieties (though many of his names have been modified by later research and discovery). He did not use very many names of friends or colleagues: the Swedish botanist Hendrik Christian Pentz (1738–1803) got a daisy-like flower, for example.

Of the Maecenas-like patrons of his first voyage, Poll and van Hoven are commemorated by the Pollia genus of flowering plants and the Hovenia genus of trees, of which the best known is the so-called ‘Japanese raisin-tree’.

Hovenia dulcis, and its fruit.

(Temmink does not seem to get a nod … ) But it seems incontrovertible that Johann van der Deutz has the most attractive memorial. 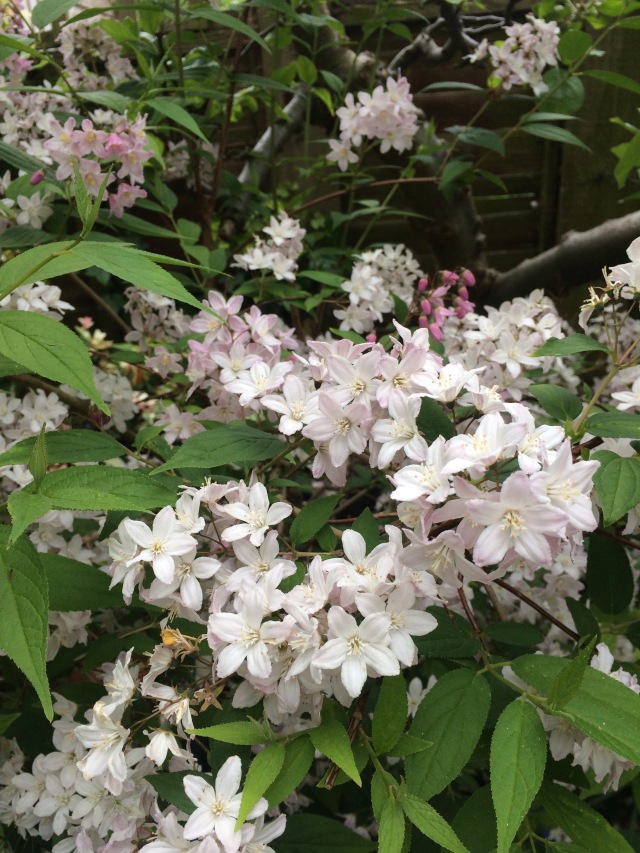