The botanic garden in Leiden is always associated with its hugely distinguished first director, Carolus Clusius, and sure enough, his bust is the first thing you see at the entrance. I wasn’t aware, however, until our recent visit, that other plant collectors and taxonomists also had a close relationship with the garden and the city.

Clusius welcomes visitors to his garden

The university of Leiden, the first such institution in the United Provinces, was founded in 1575 by William the Silent: it is said that he gave the honour to the city because of its heroic defence against the Spanish forces in the six-month siege of 1574. Twelve years later, the university asked the mayor of Leiden for permission to establish a botanical garden for its medical faulty, and in 1590 work got under way. The first director was the famous Carolus Clusius (Charles de L’Ecluse), from the minor Flemish nobility, a physician and widely travelled botanist whose early life was notable for his adherence to the Lutheran cause. 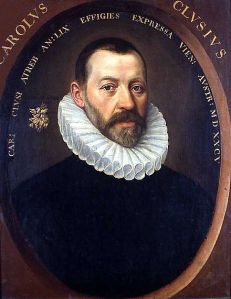 Portrait of Clusius in 1585. (Credit: University of Leiden)

Despite this unfortunate propensity, Clusius had spent three years from 1573 in charge of the imperial medical garden in Vienna: he was discharged after the accession of the eccentric Rudolf II. (I knew the latter was depressive and had a pet lion called Ottokar, but not that he was apparently portrayed as Vertumnus, the Roman god of seasonal growth, by the vegetable portraitist Giuseppe Arcimboldo, and personally approved the result.)

Anyway, Clusius was summoned to Leiden from Frankfurt am Main, taking up his post in 1593, and rapidly building up a collection of both native and exotic plants, using his own wide network of contacts, and urging the Dutch East India Company (the AOC) to have its sailors collect live plants and seeds (as well as dried specimens) from the expanding Dutch colonial empire in the east and the west. The print below shows the garden in 1610: it seems to have had its own cabinet of curiosities, to judge from the crocodiles and other wondrous specimens in the panel at the bottom (reminiscent of the later engravings on the Tradescants’ tomb in Lambeth).

The garden in 1610, the year after Clusius’ death, print by Willem Swanenburgh after Jan Cornelisz. Woudanus. Note the exotic beasts (including the jaw of a bear from Novaya Zemlya and a puffer fish(?)) below.

It appears that Clusius brought with him to Leiden the first tulips ever seen in the Netherlands (having encountered them in Vienna in plant samples sent back by Ogier Ghiselin de Busbecq from the Ottoman empire). They first flowered in 1594, causing great enthusiasm; Clusius was subsequently plagued by people asking him for bulbs and even stealing them from the garden – thus causing them to become more widely dispersed, and leading to the so-called ‘tulip mania’ of the seventeenth-century Netherlands (though its wildest excesses seem in fact to have been largely mythical), and to a vital component in the composition of Dutch Golden-Age flower painting.

Clusius originally called the tulip species now named after him as Tulipa persica praecox, and it was Pierre-Joseph Redouté (1759–1840), now better known for his flower paintings than as a botanist, who gave the lady tulip the binomial Tulipa clusiana in 1803. 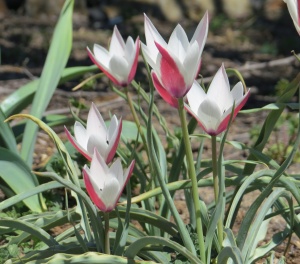 The delicate Tulipa clusiana. I wish I could get it to bulk out in my garden …

Gentiana clusii (1854); and Cistus clusii (1838) – all signs of a movement during the nineteenth century to commemorate Clusius’ achievement.

Clusius was celebrated equally as a botanic author, his first publication being a translation into French in 1557 of the Cruydt-Boeck, or herbal, of Rembert Dodoens (1517–85), aka Rembertus Dodonaeus, who spent his last three years as professor of medicine at Leiden, and is buried in St Pieter’s church. 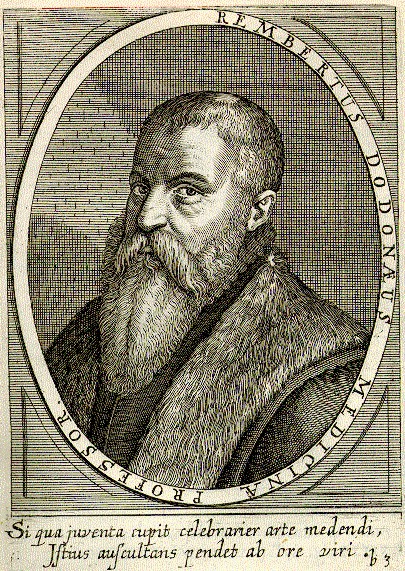 Rembert Dodoens (above), and his memorial in St Pieter’s church, Leiden (below).

His masterpiece is reckoned to be Rariorum plantarum historia (1601), in which he describes for the first time his observations on ‘breaks’ in tulips – the development in weakened bulbs of a virus which leads to spectacular (and highly desirable) colour variations in the flowers.

‘Captain Fryatt’, a red tulip developed by van Tubergen in 1929, and (below) the same variety after developing a virus. These exotic colour variants were highly sought after.

Latin as the medium for scholarly communication in the seventeenth century led to the names Clusius and Dodonaeus (the latter perhaps influenced by the sacred grove of Dodona?), but Rumphius is a less euphonious example. Georg Eberhard Rumpf was born, probably in 1627, probably in Wölfersheim in Germany, and is famous for his work on the botany and zoology of the Dutch East Indies. He had a fairly disastrous life: he lost his wife and daughter in an earthquake, and his writings and collections in fires and shipwrecks, but eventually, some fifty years after his death in 1702, the six-volume Herbarium Amboinense was published in Amsterdam. 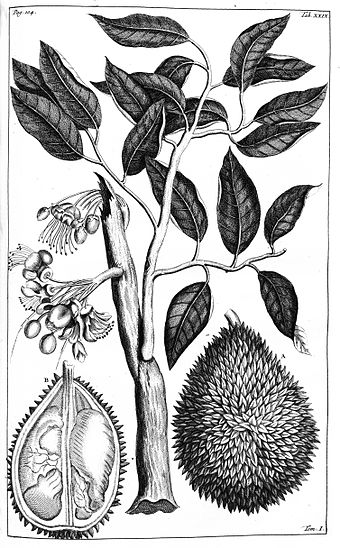 What makes this achievement all the more remarkable is that he became blind in 1670, and his study of plants and taxonomy was carried out with the aid of assistants and amanuenses, including his wife and his son, who produced the only known image of him.

Rumphius is commemorated in Leiden by a display board (above) telling his story; the German botanist and explorer Philipp Franz von Siebold (1796–1866) has a Japanese garden named for him, with a bust (with a rather sardonic expression) in the middle. 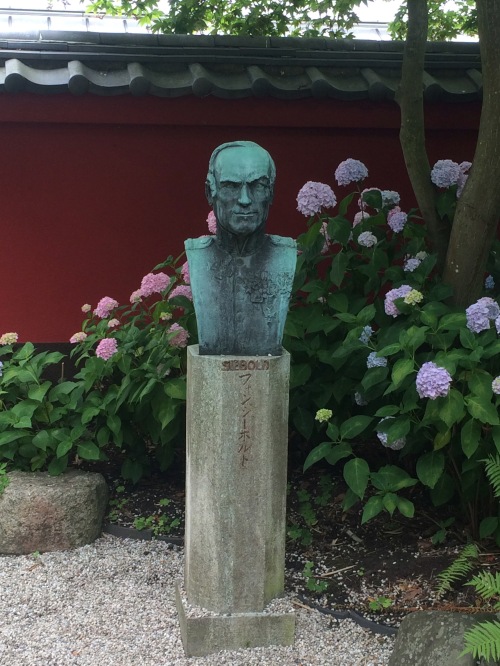 Philipp Franz Siebold, cocking an eyebrow at the Japanese garden.

Trained as a physician, Siebold joined the Dutch army, with a view to obtaining a posting to the East Indies. In 1823 he was sent (in the footsteps of Kaempfer and Thunberg) as a doctor to the Dutch trading post at Dejima in Japan, where he began what became his life’s work, exploring all aspects of the language, culture and natural history of of the empire. (He also began a Japanese family, his daughter Kusumoto Ine becoming personal physician to the Japanese empress.)

This picture by Japanese artist Kawahara Keiga (1786–1860) shows Siebold, with his wife and baby, watching a Dutch ship enter the harbour at Dejima.

Expelled from Japan in 1830, accused of treason because he was found in possession of maps of the country, Siebold settled, with his huge natural history collection, in Leiden, where his house is now appropriately a museum of Japanese culture. The list of plants named for him is extensive, from clematis to hosta, acer to viburnum, and magnolia to primula. There isn’t space to give even a short account of his fascinating career, but the Japanese garden at Leiden is an appropriate memorial to an extraordinary man.

There is much else at Leiden: a resident heron who poses for photos, a reconstructed set of beehives, 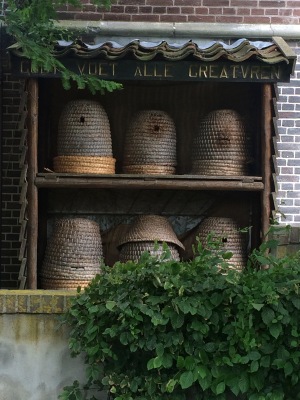 These hives are modern reconstruction of seventeenth-century straw skeps, and are full of bees.

Just in front of the hives, Linnaeus is in danger of being engulfed by a fig.

A rather alarming Diospyros lotus, or date-plum, planted in 1740. Was it the lotos tree of the Odyssey?

and an amazing array of greenhouses containing orchids, carnivorous plants and other tropical exotics from the now vanished Dutch empire. 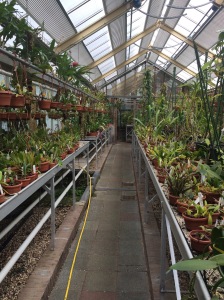 Glasshouses at two levels are filled with tender and exotic plants.

The herbarium and botanic library of the university can be found just across the road, and next time we visit (there will definitely be a next time!), we must go and look at them as well.