Assuming anyone can be bothered to make the trip, I think I’d like my ashes scattered at the Secret Cat Place on Torcello. Though alas, even Torcello is going a bit downhill, since today, for the first time ever, there was another couple at the Secret Cat Place when we arrived, sitting down as though they owned it, which – though possible – is unlikely as they were speaking Spanish.

A few years back, not many people visited Torcello – not least, I suspect, because there wasn’t a direct boat. Instead, you had to get off at Burano and change to the little ‘T’, which chugged back and forth between the two islands. Most people were lured into the lace-decorated, brightly coloured honeypot of Burano, and never made it the short distance further on. Nowadays, the number 12 vaporetto calls at Torcello either before or after Burano, and many more people fetch up there (some possibly believing they are at Burano, and wondering where all the brightly coloured houses are and why there’s only one lace shop).

The polychrome houses of Burano.

However, Torcello manages somehow to absorb people. They crowd and jostle off the boat, but by the time they have fallen into their various walking rhythms they are dispersed along the towpath which leads them to the centre of the island, and quiet falls again (apart from the sound of the ‘Blue Danube’ and other hits coming from the elderly accordion player who strikes up as the first visitors come into view).

You walk down the towpath (herringbone brick, laid not all that many years ago but already starting to buckle and crack as it settles into the oozy subsoil), past gardens with (at this time of year) glowing pomegranates and mangy cats (in the spring it’s tulips, blossom, countless swallows and the same mangy cats), past cafés and souvenir shops, past the Ponte del Diavolo, a parapet-less bridge from which I always meanly hope the odd capering poseur will occasionally tumble into the green chalky water below, to the open space where what is left of a city which in its prime was inhabited by possibly as many as 10,000 people (though more modern authorities claim fewer) survives.

The Devil’s Bridge and the towpath paving.

Whether Torcello predates Venice is unclear. It is thought to have been founded by inhabitants of the terra firma as a refuge, in the shifting sands of the laguna, as they fled from Attila the Hun in 452. (Huns don’t do boats.) Venice’s foundation myth is that its first church (San Giacomo di Rialto) was dedicated on 25 March 421. What is indisputable is that Torcello became, in the seventh century, the seat of the bishopric formerly based in Altino on the edge of the lagoon.

The island is dedicated to St Heliodorus, a former bishop of Altino whose relics were carried off by the refugees, who built a community which eventually contained nine churches (two of which survive today), a glass-making industry, and a harbour area. Coins, ranging from a denarius of Charlemagne to an Arabic dirham of the ninth century, suggest that – just like Venice – Torcello was a hub of trade between the western European mainland and the Byzantine empire to which it very loosely belonged. Its own most important export commodity was probably salt, from the extensive shallow saline beds of the lagoon. 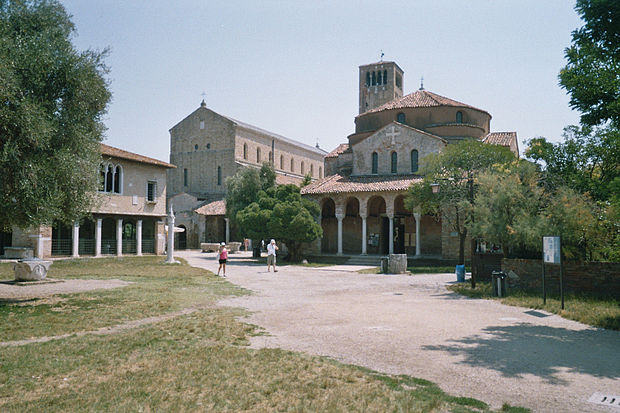 The piazza of Torcello, with Sta Maria Assunta, and to the right, the small, cruciform church of Sta Fosca the martyr, buried here along with Sta Maura.

What apparently did for Torcello (the current permanent population of which is somewhere between 10 and 100) was a lowering of the land level and the rise of malaria-bearing mosquitoes. More and more people seem to have moved to the larger islands of Burano and Murano (the bishopric was moved to Murano in 1689), and the private and public buildings, abandoned, fell into ruins, and were robbed of stone for construction elsewhere. What mostly brings visitors today is the ex-cathedral and its bell-tower (recently restored after several years in a massive corset of scaffolding). 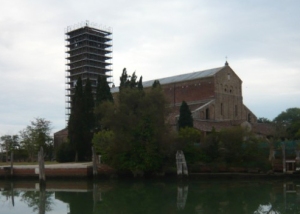 The campanile under restoration.

You have to pay to get into both, which seems to put a lot of people off. Inside, there are notices saying ‘No photo’, ‘Silenzio e preghiera’, and ‘Show respect for this holy place’ all around. Unfortunately, nobody takes much notice. The lady in the audioguide kiosk has the additional task of popping out every five minutes or so to yell ‘No photo!’ at the many visitors who are apparently not merely functionally illiterate but also fail to recognise the meaning of the (fairly universal) ‘no photo’ symbol. Today there was also a German tour guide who seemed to believe that, in spite of the microphone transmitting to the earpiece of each individual in his flock, he had to shout very loudly to be heard, the English group discussing where to have lunch, and of course the Americans …

However, you don’t really need silence (nice though it would be) to marvel at the interior of the church. The apse behind the altar where the remains of St Heliodorus rest contains a mosaic depicting the Virgin and Child in the Byzantine ‘Hodegetria’ style, against a background of pure gold: below her are ranked the twelve apostles, the Evangelists and St Paul being marked out by their books, and St Peter by his keys.

The Virgin and Child.

The right-hand aisle has a wonderful image of Christ Pantokrator, supported by the archangels Michael and Gabriel, with four doctors of the church below them.

The apse at the end of the north aisle.

It is the rear wall , though, which really causes the jaw to drop. One huge mosaic, with six registers: the top one shows the Crucifixion, the second the Harrowing of Hell, and the four below the Last Judgment, as described in the Apocalypse of St John. 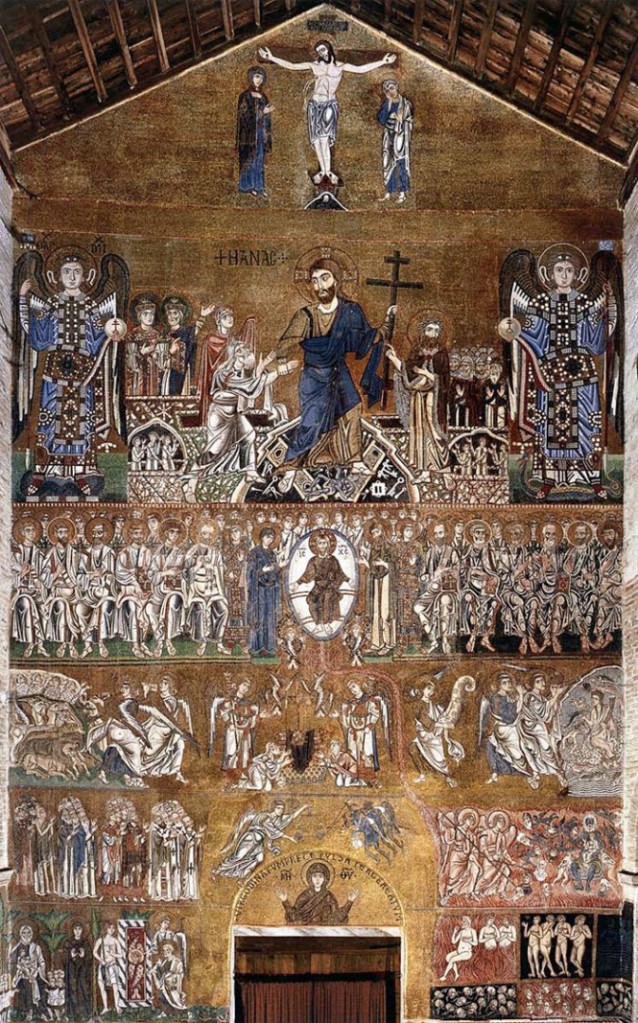 The details are wonderful, and the serenity of the ‘heaven’ side, where Abraham sits surrounded by redeemed souls in the shape of innocent children, contrasts violently with the treatment of the damned souls in Hell, who are spared neither by their garb as monks and priests, nor by their royal diadems. 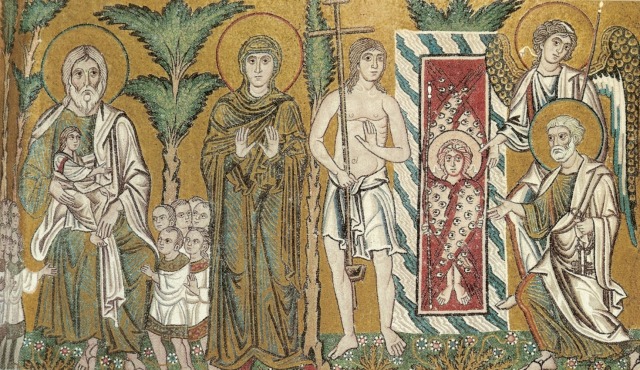 Abraham with the souls of the saved, the Virgin, the Good Thief, a cherub guarding the door of Paradise, the Archangel Michael and St Peter.

The souls of the wicked are driven in to the eternal fires of Hell.

Angels with trumpets summon the sea to give up its dead. 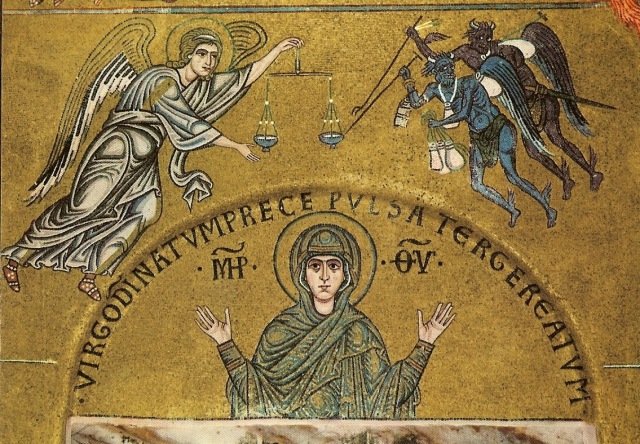 An angel holds a soul in the balance, while demons use their instruments of torture to weigh it down.

These pictures, mostly culled from Wikipedia, don’t give even a remote approximation of this masterpiece – and of course, the colour registration is all over the place. There are various guides and other books – mostly elderly, mostly without good colour. You really will have to go and see for yourselves, and take in the tranquillity of this strange, windswept, melancholy island –  but just stay away from the Secret Cat Place!