Doomed to Find a Premature Grave

These portentous words appear in the introduction to the 1834 English edition of Letters from India by the French natural historian Victor Jacquemont (1801–32), ‘Travelling Naturalist to the Museum of Natural History, Paris’. If his name is remembered now in Britain, it is probably for the western Himalayan birch, Betula utilis var. jacquemontii, named by Édouard Spach in 1841, which interestingly does not appear in this late nineteenth-century list of the plants named in his honour.

Jacquemont, born in Paris, had – as an apparently very well educated teenager – access to its scientific and literary salons, botanising with Adolphe-Théodore Brongniart (the ‘father of palaeobotany’ and the son of the man who directed the Sèvres porcelain works during 47 years and many regime changes) and Adrien de Jussieu (son of the more famous Antoine), and becoming  friend of Alexandre Dumas, Prosper Mérimée and Stendhal. A hopeless love (it is alleged) for a singer, Adélaide Schïasetti, and dislike of the Napoleon-worship rampart in France at the time (his republican father had been arrested by Napoleon’s police in 1808) caused him to leave for America in 1826 (his friendship with Lafayette probably helped with this plan).

Jacquemont, from the frontispiece of volume 1 of the Letters.

He arrived in New York in December 1826, but his stay was short-lived after a dinner-party argument with the Buonapartist general François Antoine Lallemand led to his challenging the veteran to a duel. This could not be fought in New York (Aaron Burr’s killing in 1804 of Alexander Hamilton had made such ‘affairs of honour’ illegal in the state), so Jacquemont demanded that they both go to Haiti to settle the affair. Lallemand eventually apologised, but Jacquemont went to Haiti (where one of his elder brothers was a merchant) anyway, in early 1827.

This experience of travel apparently led to his being asked by the Muséum national d’histoire naturelle, with the support of Baron Cuvier, to undertake a voyage to India, to explore the geology of northern India and the Himalayas as well as collecting botanical and other specimens. He returned to France via the eastern seaboard of the United States and Canada, collecting material for the museum as he went. He then proceeded to London, to make contact with the Royal Asiatic Society and to make sure that he had the permission of the East India Company to travel in ‘their’ parts of India.

On 26 August 1818, he set sail from Brest on board the Zélée (I’m not sure if this was the corvette later under Dumont D’Urville’s command), and after a voyage of nine months he arrived in Kolkata in May 1829, travelling first to Delhi and then north, collecting, making observations, and writing letters to his family and friends as well as detailed notes on everything he saw. (In one bizarre coincidence, he met with an shabby beggar who turned out to be the pioneer of Tibetan studies in Europe, Hungarian orientalist Kőrösi Csoma Sándor (c. 1784–1842), and arranged for the manuscript of his Tibetan dictionary to be conveyed to the Royal Asiatic Society, who published it in 1834.) 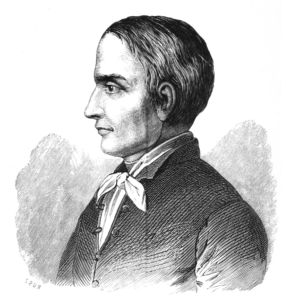 Kőrösi Csoma, who died in Darjeeling in 1842.

Jacquemont’s exertions seem to have worn him out, because he died in Mumbai (either of a liver disease or of cholera) on 7 December 1832. Forty-six years later, Richard and Isabella Burton found his grave (as she recounts in the second volume of her biography of her husband) and spoke to people who had knowledge of his death; in 1881 his body was exhumed and returned to France, and in 1893 it was buried, appropriately enough, in the Jardin des Plantes.

His family and friends collected his letters and published them in 1833 as Correspondance de Victor Jacquemont avec sa famille et plusieurs de ses amis: pendant son voyage dans l’Inde, 1828–1832. His scientific works were later issued as Voyage dans l’Inde pendant les années 1828 à 1832, in six folio volumes (two containing plates) between 1841 and 1844. The letters were published in two volumes in English in 1834 as Letters from India: Describing a Journey in the British Dominions of India, Tibet, Lahore and Cashmere, in the Years 1828, 1829, 1830, 1831, with a brief biography of Jacquemont by the ‘Editor’, who dedicated the work to Sir Alexander Johnson, chief justice of Ceylon and one of the founders of the Royal Asiatic Society, who had been very helpful to Jacquemont when he was in London seeking the relevant permissions for his journey.

The Letters received a most extraordinarily lambasting in John Murray’s Quarterly Review of February–April 1835. One has to believe that the anonymous reviewer knew who the anonymous ‘Editor’ was, since almost as much space is devoted to finding fault with the short biography as with the letters themselves. Jacquemont’s problem seems mostly to have been that he was French. In addition, he had the all-fired nerve to recount (in letters which he probably had no idea would ever be published) how well he got on with the wife of Lord William Bentick, governor-general of India, at dinner parties. 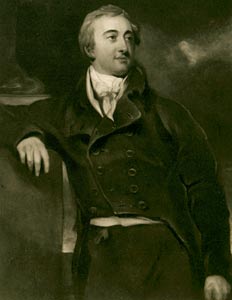 Lord William Bentinck and his wife (née Lady Mary Acheson). She was drawn by Ingres.

Also, he was French. Oh, and he had once told his young female cousin that Tristram Shandy was one of his favourite works, and she was now trying to learn English by translating what the reviewer calls ‘the obscure and filthy sensualities of Sterne’. And did I mention that he was French?

One could argue that his proud and grieving family should not have rushed the letters – exuberant, frequently self-mocking, but inevitably extremely self-centred – into print, and the English version (over which of course they would have had no control) frequently mistranslates – as the Quarterly takes great pleasure in pointing out.

A very short extract from the Quarterly Review.

However, the quality of the work in the Voyage dans l’Inde, when it was eventually published, impressed scientists worldwide. Jacquemont’s own herbarium is divided between Paris and Montpellier: here is the type specimen of Geranium tuberaria, from Paris:

He named a number of plants (his botanical soubriquet is Jacquem.), though many of his names are now classed as synonyms. But the number of plants named after him demonstrates the high regard in which his work was held by his contemporaries and successors.

The French botanist Jacques Denys Choisy (1799–1859) named a type of convolvulus Jacquemontia. This is the endangered Jacquemontia reclinata, from Florida.

A grove of Betula utilis var. jacquemontii at Anglesey Abbey in Cambridgeshire: ‘utilis‘ refers to the use of its bark as a kind of paper.

A single trunk of Betula utilis var. jacquemontii lights up the corner of a small, shaded garden in the East End of London.