What is an autumn crocus? The easy answer is that it is not in fact a crocus (in the Iridaceae family) but a colchicum (in the Colchicaceae family), Colchicum autumnale to be precise. Needless to say, neither life nor taxonomy is anything like that simple …

The common English names of Colchicum autumnale include ‘meadow saffron’ and ‘naked ladies’, the former because of its stamens and the latter because the flowers emerge long after the foliage has shrivelled.

The name originates from the place ‘Colchis’, on the Black Sea, whence Jason and the Argonauts brought back the legendary Golden Fleece, and also the king’s daughter, the witch Medea (it did not end well). Colchis is, apparently, one of the earliest manifestations of the ancient kingdom of Georgia, arising from tribal groupings around the coastal lowlands of the Caucasian mountains.

The ‘naked lady’ flowers without any sign of foliage.

The colchicum can be distinguished from Crocus species not least because the number and arrangement of styles and stamens are different. The corms are also a giveaway: they are asymmetrical, with smooth skins rather like tulips, while crocuses have round, flattened corms, with fibrous skins which look almost as though they have been woven.

A crocus corm, with rougher skin.

It should also be noted that on no account should you attempt to harvest the stamens of so-called meadow saffron – all parts of the colchicum are poisonous, the toxin being colchicine, which can however be used in the treatment of gout and also of a very unpleasant-sounding disease called FMF: Familial Mediterranean fever. 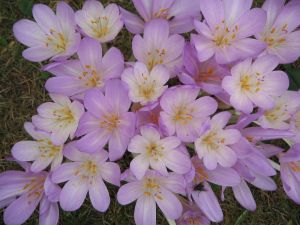 As well as the familiar Colchicum autumnale, other species include C. byzantinum, C. cilicicum and C. speciosum. There is also a large number of garden hybrids, several with AGM status, of which the best known is probably C. ‘Waterlily’. 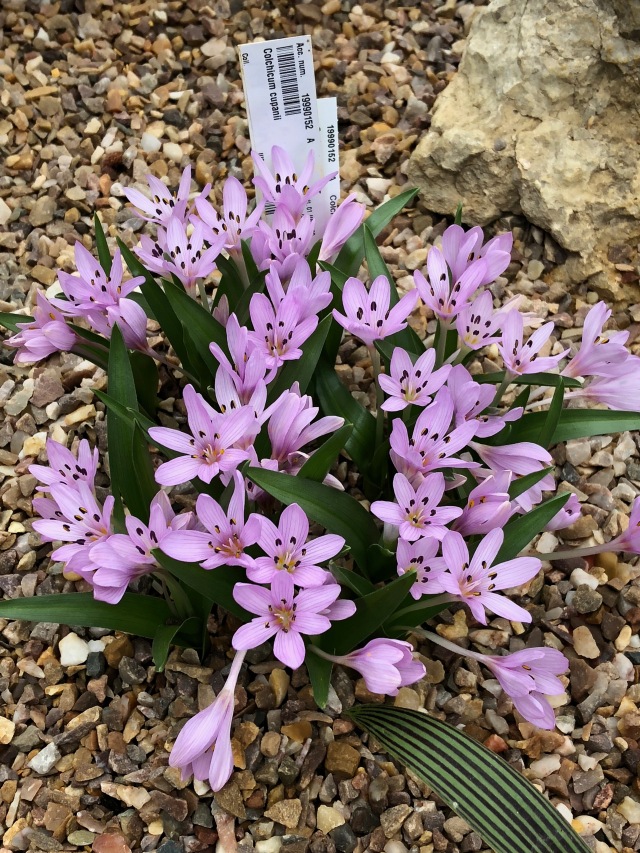 The tiny and beautiful Colchicum cupani  (named, like the famous sweet pea, for Francesco Cupani (1657–1710), Italian botanist) in the Alpine glasshouse at Cambridge.

So far, so straightforward – but there is also a large number of Crocus species which flower in the autumn. The most famous is Crocus sativus, the saffron crocus, the cultivation of which in the sixteenth and seventeenth centuries gave its name to the Essex town of Saffron Walden; though its traditional habitats are the Mediterranean area, Iran and the Far East. Fascinatingly, it is known only as a cultivated plant (going back 3,500 years) and its wild ancestors have not yet been established. 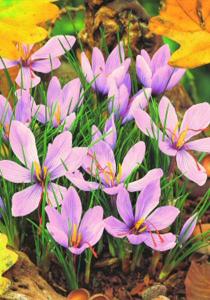 Crocus sativus, the saffron crocus: look at the length of the stamens.

Saffron the spice and dye-plant is famously expensive, not only because you have to pick and dry a very large number of stamens to produce a pinch (let alone a gram, let alone an ounce), but also because the picking has to be done by hand. 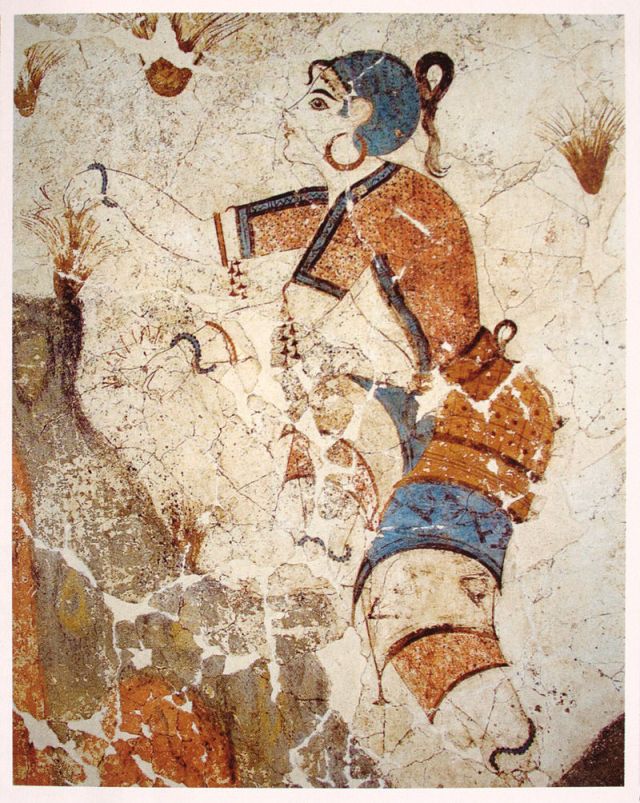 The famous ‘Saffron gatherer’ wall-painting from the Minoan town of Akrotiri on the Greek island of Thera, c. 1500 BCE.

As a result, it has always been a luxury item, with other, cheaper spices, such as turmeric (Curcurma longa, in the ginger family) used to achieve a saffron colour, though not of course the aroma. It is an ingredient in many medieval recipes, but this does not imply that it was in common use – rather the reverse, in that surviving recipes come from at least the aristocratic, if not the royal, end of the culinary spectrum.

Other crocuses currently blooming in the Alpine glasshouse @CUBotanicGarden are Crocus kotschyanus, C. niveus ‘Main Blue’ and C. tournefortii, as well as the unrelated but similar-looking Sternbergia lutea, also from the eastern Mediterranean.

According to IPNI, Sternbergia was named by John Bellenden Ker Gawler (c. 1764–1842) botanist and expert on nursery rhymes (the Linnaean name having been Amaryllis lutea). (I have also seen the naming attributed to the Austrian naturalist Count Franz de Paula Adam von Waldstein (1759–1823), older brother of Count Ferdinand Ernst Gabriel von Waldstein (1762–1823), the patron of Beethoven.) 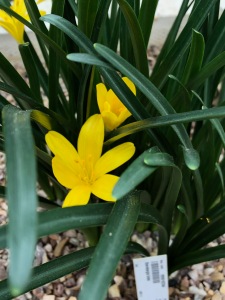 The flowers of Sternbergia lutea.

The eponymous Sternberg was ‘the Father of Palaeobotany’, Kaspar Maria von Sternberg (1761–1838), Bohemian aristocrat, theologian, entomologist and geologist as well as botanist. In addition to establishing the National Museum in Prague, he also founded a botanic garden in Regensburg (another thing I didn’t know about the place) and was a friend of Alexander von Humboldt, and of Goethe. 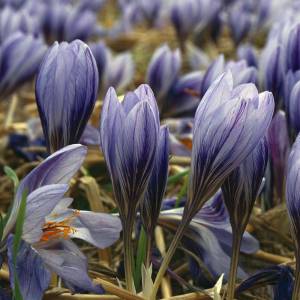 Other autumn-flowering crocuses I like the look of are Crocus cancellatus, and C. speciosus, aka Bieberstein’s crocus, first described by Friedrich August Marschall von Bieberstein (1768–1826) botanist, explorer of the south Caucasus, and a friend of Peter Simon Pallas. More information can be found on these useful pages from The Garden magazine.

It’s too late for this year, of course, but I will try yet again with my Colchicum autumnale (they produce foliage for me but don’t flower, so I’m obviously doing something wrong), and I must make a note to look out for the corms of some of these gorgeous species crocus as well.