This was my fourth year of retailing my wares at Mill Road Winter Fair in Cambridge, and it was a very successful day, in spite of not totally desirable weather. (I should not complain of the odd spot of rain, given the tempest we contended against in my first venture, in 2015.)

At the bottom of Mill Road Bridge. (The graffiti in the background clash a bit with my seasonal colours: oh, and I realised much too late that I’d muddled the side and back of the gazebo.)

Re-reading my account of that day, I realise that one of the take-away conclusions still holds true – must knit more hedgehogs! Having sold out of what I had confidently believed was an ample supply within two hours, I have decided that if, starting tonight on the train down to London for an exciting Hedgehog family event, I were knit two a week for the next year, that might be about enough. (???????) 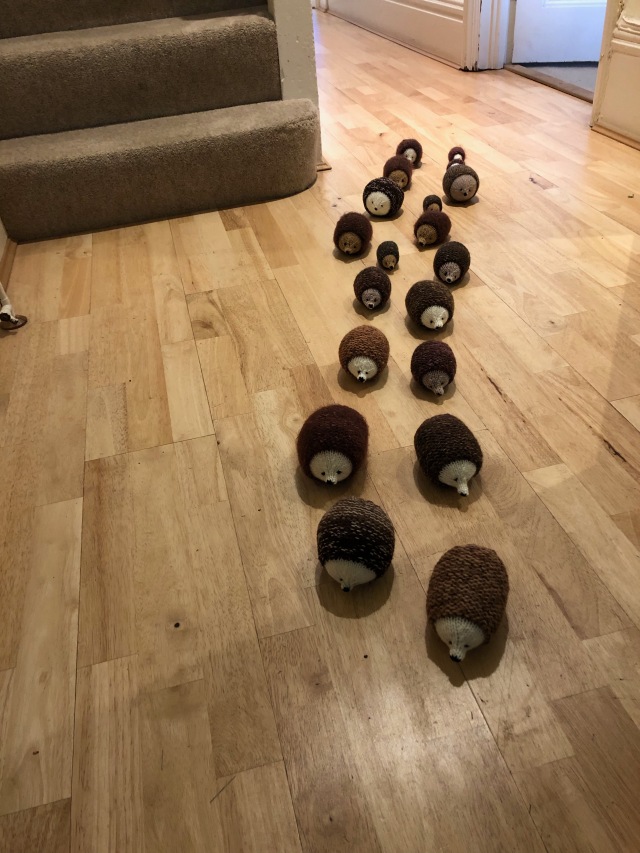 A detachment of hedgehogs begins the long match to Mill Road … 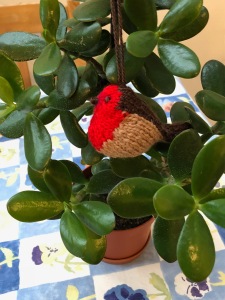 and Christmas puddings – one foreign customer liked them very much, and bought several, especially after it had been explained to her what they were.

The animals knitted by a talented and generous friend sold out very rapidly: their USP, that you could undress them (i.e. that they came with beautifully crafted removable clothes) began to sound a bit odd after I’d repeated it half a dozen times … And I’m afraid that I inadvertently triggered meltdown in a small girl who really, really wanted a lovely rabbit in a pink dress but whose parents told her kindly but firmly that she couldn’t have it, as she didn’t have enough money.

Menagerie Manor. (I could have sold the fox four times over.)

I sell things for a specific charity: https://www.edukaid.com/, which I have supported for several years, and there’s always a difficulty with pricing things on these occasions. I used to hold a summer plant ‘sale’, where I offered plants in exchange for donations, and people – knowing the goodness of the cause – were mostly remarkably generous. Things you have hand-made are, however, a bit more difficult.

Back in the day, Hedgehog Towers became totally devoted to propagation each spring …

A woman looked at the price tag on one of my knitted wreaths and tutted to herself. Does she have a CLUE how long they take to make??? (Happily, I sold all three in the course of the day…)

If I paid myself the minimum wage for creating my offerings, and if I also built in the cost of materials, hire of stall, etc. (which I don’t at all), I would have to price the items at a level which simply nobody would pay in the context of this kind of Christmas fair. (I was a bit taken aback when somebody asked me if I took plastic – I would have thought it was obvious that I’m not in that league.)

But it was a great, if exhausting, day – not too wet, after all, and a gratifying amount of money was raised: even more gratifying since EdUKaid is part of this year’s Big Give: make a donation before 4 December and your money will be doubled. (See this link.) Thanks are due, as always, to Him Indoors for taxi duties and all-round support!

And I have a half-completed hedgehog with me – I rushed out of the house tonight to catch the train without picking up the second pair of knitting needles necessary to craft his features. Never mind: there are 364 days left to go …

4 Responses to The Gazebo Rides Again