May I strongly recommend the new exhibition in the Fan Gallery at the Fitzwilliam Museum (it’s on until January 2020, so you have plenty of time)? It is a selection of the fan collection of the Hon. Christopher Lennox-Boyd, given to the Museum in 2015 under the government’s AIL scheme, and is a very good fit with the Museum’s existing Messel-Rosse collection. In fact, I saw the Lennox-Boyd fans, mostly still in boxes, soon after they arrived in 2015, having no idea at the time of the closer relationship with the Museum on which I later embarked …

This exhibition contains only a small fraction of the 600-odd items in the collection, but it includes a really informative series of displays (and a video) showing the immense amount of skill and care involved on conserving these fragile items with their delicate material and moving parts. (As a child I had, successively, several gilt plastic and paper fans from Woolworths – great fun, but none of them survived for very long …)

Lennox-Boyd (1941–2012) was a dealer in prints, especially mezzotints, but also collected all sorts of printed ephemera, drawings, maps, etchings, watercolours … (As the ODNB remarks, he had no need to earn his living.) As a result, many items in his fan collections were, as it were, embryonic: the flat, semi-circular print on a rectangle of paper which was later cut out, folded and attached to the stiffeners or sticks which would transform it into a most desirable and fashionable artefact.

The fan which particularly caught my attention was ‘educational’ – this is a recognised category, consisting not merely of decorative images but of improving information. In this case, the purpose is to boost one’s botanical knowledge, with the names of the different shapes of leaves and the numbered parts of the flower on one side, and on the other a key to the numbers and an extract from The Botanical Garden, a long mock-heroic poem by Erasmus Darwin (Lunar Man and grandfather of the more famous). 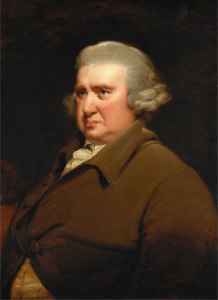 Happily, this was quite a popular fan in its day, and the Fitzwilliam has a finished one in its collection: 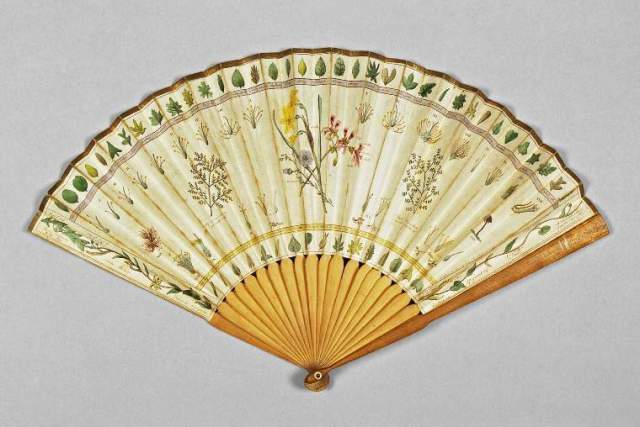 The reverse side of the fan, with the key to the images on the front, and lines from The Botanical Garden in the centre. (Credit: the Fitzwilliam Museum)

During the eighteenth century, botany was considered an appropriate educational study for girls and women, because – unlike, for example, human and animal biology – flesh did not raise its unacceptable head. Interestingly, even the wide adoption of the Linnaean system of plant classification (based on sexual characteristics) did not much dent the perception that botany was a pure and non-corrupting area of study. 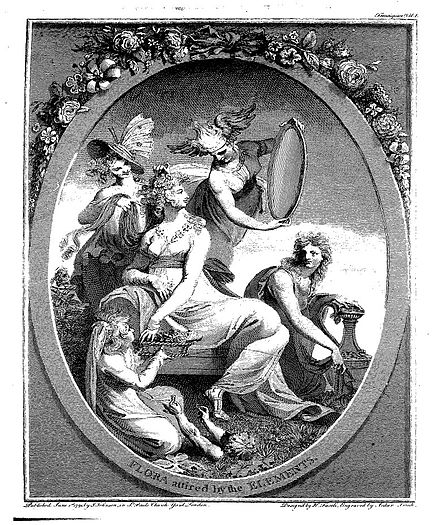 The Botanical Garden , and especially its second part, ‘The Loves of the Plants’ (published first, anonymously, in 1789, and then together with Part 1, ‘The Economy of Vegetation’, in 1791), explicates Linnaeus by anthropomorphising the various plants (the reverse of Ovid, you might say) as coy nymphs and their ardent wooers. Darwin provides edifying footnotes to his verses: I particularly like this section, about the pink, which refers to Mr Fairchild’s mule. 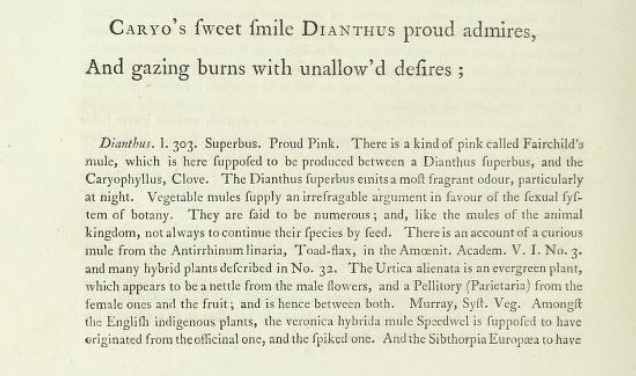 And, of course, there was a burgeoning of botanical books designed specifically for ladies. Priscilla Wakefield’s Introduction to Botany, In a Series of Familiar Letters, with Illustrative Engravings (1796) was designed to appeal to women and children, and avoided the complications of Latin; while the Cambridge professor Thomas Martyn’s 1785 translation and expansion of Rousseau’s letters on botany, was addressed to ladies who ‘wished to amuse themselves with natural history’.

The title page of Jacson’s Botanical Dialogues (the 1797 edition), with a nod to Rousseau. (‘Hortensia’ was a name (originating from French ‘Hortense’), for the Hydrangea.)

In 1797, Maria Jacson (1755–1829), who knew Erasmus Darwin, published Botanical Dialogues, between Hortensia and her Four Children, an introduction to the Linnaean system for use in schools, but it was thought to be too complicated, so she revised it, and reissued it in 1804 as Botanical Lectures, ‘a complete elementary system, which may enable the student of whatever age to surmount those difficulties, which hitherto have too frequently impeded the perfect acquirement of this interesting science’. 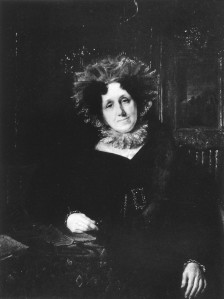 Mrs Jane Haldimand Marcet, whose books took the form of conversations between teacher and students.

Rather later came the purposefully didactic 1829 work of Mrs Marcet (1769–1858) (deriving from de Candolle’s system), and in 1834, John Lindley’s Ladies’ Botany, Or, a Familiar Introduction to the Study of the Natural System of Botany. Jane Loudon, having published her best-selling Instructions in Gardening for Ladies (which indicated that ladies could actually get their hands dirty), in 1840, followed it two years later with Botany for Ladies Or, A Popular Introduction to the Natural System of Plants, According to the Classification of De Candolle.

I am sure that it was not at all by coincidence that this botanical fan was made in the 1790s, precisely at the time when the first generation of books on botany for women was being published. But what is really interesting is that the fan was ‘published’ by a woman maker, Sarah Ashton of 28 Little Britain, London, who announced ‘The Botanick Fan’ in The Public Advertiser of 1 August 1792. I haven’t (so far) been able to find out too much about her: she was apparently a widow who had taken over her husband’s business, and she died in July 1807.

In the early eighteenth century, Little Britain had been a hive of printing and publishing activity, as busy as the area around St Paul’s, but after the mid-century, this declined: there is an interesting account here of the different trades in the street over time.

Other fans from Ashton’s workshop which have survived include ‘The Lady’s Adviser, Physician and Moralist’; 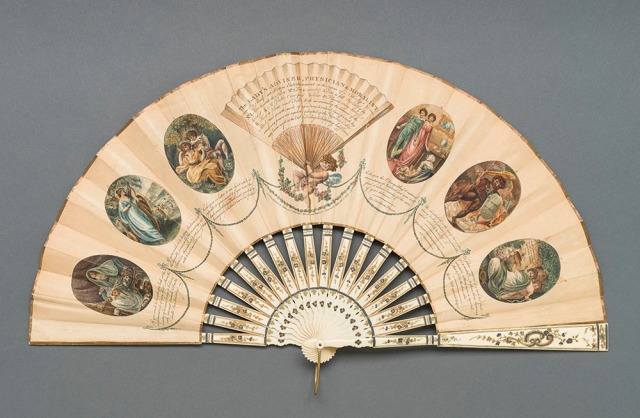 The ‘Lady’s Adviser’ fan (Credit: Cincinnati Art Museum, Ohio), and (below) the original print. (Credit: the Victoria and Albert Museum)

‘Shakespeare’s Seven Ages’, illustrating Jaques’ words in As You Like It, Act II, scene 7.

According to the V&A, Ashton also ‘published a female version of the Seven Ages … an idea that presumably came from her. Being a female businesswoman was relatively unusual in the 18th century, and it seems unlikely than any male publisher would have conceived the notion’.

There were also nods to royalty, including ‘The Apotheosis of the Duke of York’ (Frederick Augustus, (1763–1827), second son of George III, who combined a career as a Commander-in-Chief of the British army (he had 10,000 men) with his position of Prince-Bishop of Osnabrück, which provided a useful income), and a similar eulogistic portrayal of his duchess, Frederica Charlotte of Prussia, who was normally rather less in the public eye than his notorious mistress Mary Anne Clarke. In this context, the cooing doves under the duchess’s bust strike an ironic note. 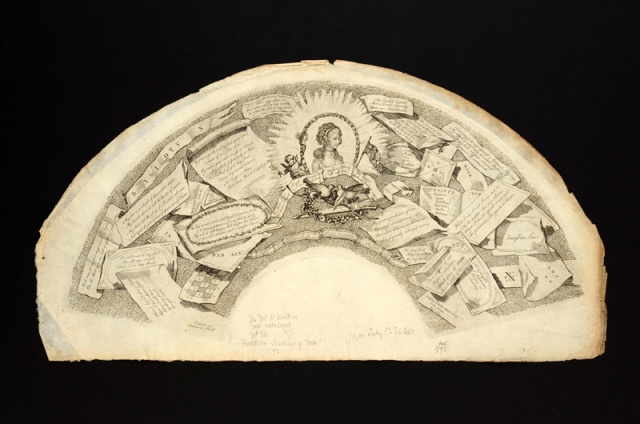 (Unlike the rest of Queen Victoria’s wicked uncles, Frederick was not in a position to marry and produce a legitimate heir upon the death of Princess Charlotte of Wales, since he was already married.)

A slightly stranger genre was the comical fan: one from 1797 depicts ‘The World Gone Odd and Crazy’, and another is called ‘Vive La Bagatelle!’. (It occurs to me that perhaps ‘The Lady’s Adviser, Physician and Moralist’ comes into this category as well.)

Sarah Ashton was following in a manufacturing tradition largely begun by Huguenot refugees in the late sixteenth century. After the Revocation of the Edict of Nantes, even more French fan-makers entered the country, many of them settling in the Spitalfields area, where it is claimed (though the claim is disputed) that present-day Fann Street was formerly spelled with one ‘n’.

The ‘Darnley Portrait’ of Elizabeth I, carrying a feather fan. Such fans were appropriate new-year gifts for the queen. (Credit: the National Portrait Gallery)

In 1709, Queen Anne granted a charter to ‘The Master, Wardens, Assistants and Society of the Art and Mystery of Fan Makers of London and Westminster and Twenty Miles Round’, and in 1770 Ashton was admitted of the Mystery in her own right.

One of her artist-designers was the engraver George Wilson (active c. 1795 to c. 1801:  read more about his work here). He was responsible for ‘The Lady’s Adviser’ and the ‘Seven Ages’, and produced designs for other fan makers as well. But the designer of the ‘Botanick Fan’ is unidentified; nor, sadly, do we have much knowledge of the men and women who painted the printed papers, cut and planed the sticks (of yew, sycamore and laburnum), made the folds, and glued the fans together.

Ashton published the new design ‘as the Act directs July 21st, 1792’. By the time of her death in 1807, the fashion for fans (except in the most formal of circumstances, such as appearances at Court) was already beginning to die out, though there were occasional revivals in fashion throughout the nineteenth century, not least in the period of Japonisme. (Intriguingly, the so-called Victorian ‘language of fans’ appears to have been developed as a marketing ploy by a Parisian manufacturer. It seems unlikely that many men – the main target of all the fan-waggling – would have mastered the code …)

It is nice to think that substantial numbers of serious-minded ladies would have leapt at the chance of an improving (rather than patriotic or comic) fan to study covertly while being bored senseless on social occasions such as balls. Is this the origin of the expression ‘wallflowers’? (Almost certainly not!)