I imagine that ‘Play it again, Sam’ is the most famous line from a film which was not actually spoken in the film, but ‘We don’t like strangers in these parts, Mr ‘Olmes’ may run it close among aficionados of the Rathbone/Bruce Sherlock Holmes films: nobody in ‘the dark and sinister alleys of Limehouse’ actually says that. The words of the dark and sinister stranger, in Sherlock Holmes and the Voice of Terror, are actually: ‘I wouldn’t come down here if I was you. This is Limehouse, and we don’t fancy your sort of bloke in these parts.’ To which Holmes stoutly replies: ‘This is still a free country. A man may walk where he pleases.’

This is by way of preamble to my recent peregrinations in Limehouse, accompanied by the younger sister of my usual Lovely Assistant (same pram, different baby). We were heading along the Thames Path to the fleshpots of Canary Wharf, but kept getting diverted, and ended up in various interesting by-ways …

Walking past Limehouse Basin to the end of the Regent’s Canal, I stopped to read an information board, which revealed something so blindingly obvious that I had never thought of it before. The Docklands Light Railway, in the stretch from Shadwell to past Limehouse, runs on very old arches. What these turn out to be are the structural remains of the 1840 London and Blackwall Railway, built by Robert Stephenson and G.P. Bidder to link the City with the Blackwall river ferry. 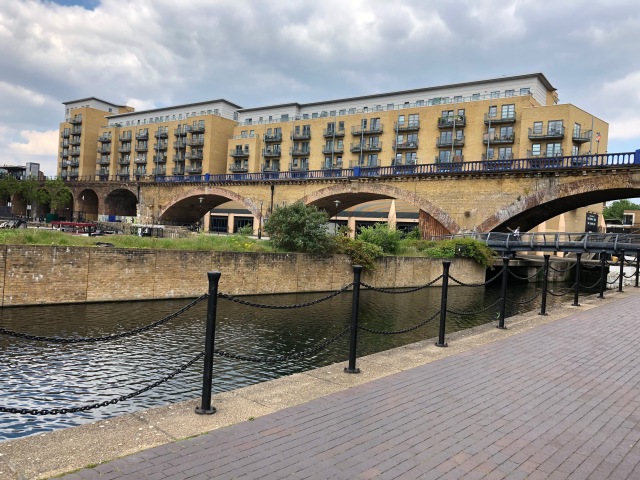 The railway arches spanning the end of the Regent’s Canal.

The engineering was remarkably innovative – not least because the railway used no locomotives. To avoid the risk of fires from stray sparks, static engines at either end hauled the trains to and fro on ropes – though by the end of the decade, conventional engines were being used. The line was closed in 1962, but thank goodness the magnificent infrastructure was left intact for the DLR to reuse.

One of the massive brick-and-stone arches, with a beagle for scale.

Before the railways, of course, were the canals. The Regent’s Canal, which linked the east London docks with the Grand Junction Canal, was developed from the 1790s: the last section, from Camden to Limehouse (and including a 969 yard tunnel under Islington) was opened on 1 August 1820. Duckweed is now spreading remorselessly from the lock to the basin … 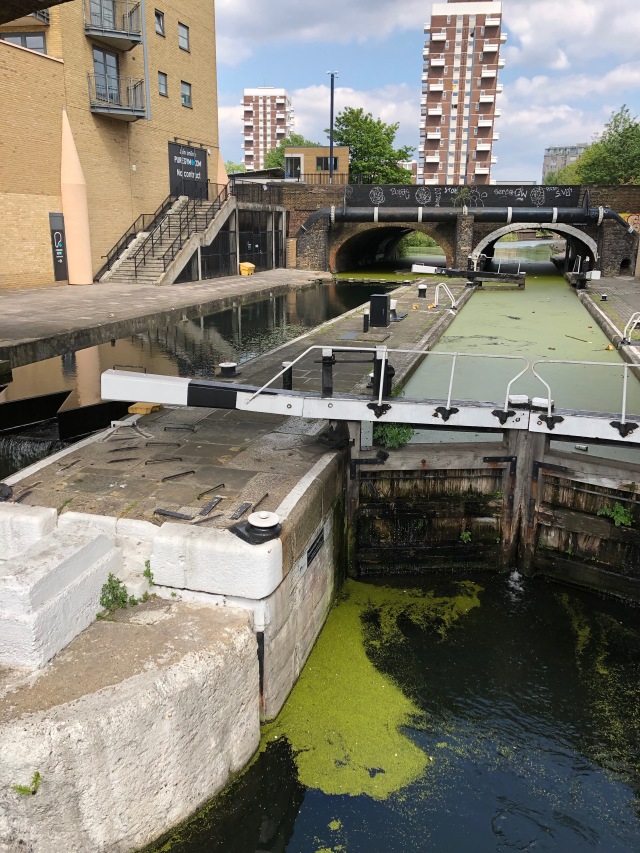 The lock gate at the end of the canal. 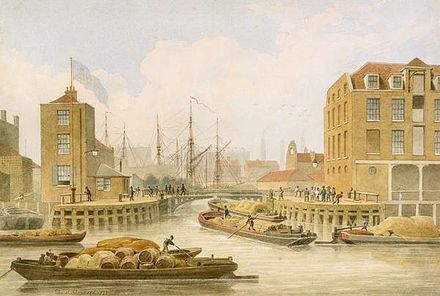 The Regent’s Canal at Limehouse in 1823.

A swan is nesting at the edge of the basin, and as we passed she (he?) was busy tidying her surroundings – the picture is not brilliant as she was on the move the whole time, picking up twigs in her beak and twisting her neck to throw them to one side. There are at least three eggs in the nest, so I hope she finished her spring-cleaning quickly and is now back on top of them.

The swan and its eggs.

I spotted another nest, on a smaller scale, inside the central post of this street light: the parent bluetits were in and out so rapidly that I was astonished I actually caught one on camera.

A bluetit leaving its nest at speed.

I decided to walk up to St Anne’s, Limehouse, a Hawksmoor church, like St George’s in the East, built as the huge parish of St Dunstan’s, Stepney, was split into smaller chunks to care for the souls of the burgeoning population of London. They are sometimes called ‘Queen Anne Churches’ as she took an interest; they were funded by a tax on coal being moved down the river Thames (originally imposed in 1670 to pay for the rebuilding of St Paul’s). There were intended to be fifty: only twelve were built, though seven existing churches were also restored.

St Anne’s was consecrated in 1730, and is surrounded by a large burial ground where (again, like St George’s), the gravestones have been moved to the walls, leaving only the monumental tombs and the pyramid in situ.

The design of the cleared graveyard as a garden was carried out in 1887 by Fanny Wilkinson (1855–1951), who was then ‘honorary landscape gardener to the Metropolitan Public Gardens, Boulevard and Playground Association’, adviser on landscape to the Kyrle Society, friend of Millicent Garrett Fawcett and creator of Vauxhall Park: and who sounds as though she needs to be better known …

The pyramid is a mystery, summarised here: the suggestion that it was intended by Hawkesmoor for one of the towers of the church seems unlikely.

Among the other tombs are that of Richard Peter Smith, shipwright, and ‘The Family Vault of Mr Samuel …’. 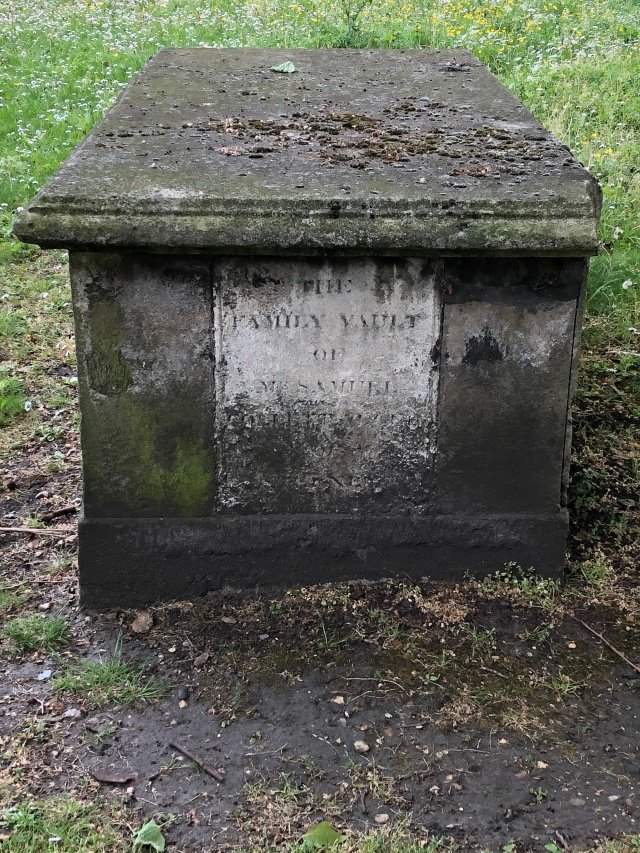 As with so many memorials in London churchyards, the lettering is becoming obliterated.

The parish war memorial contains the usual distressing numbers of names, so often more than one from the same family.

The bronze plaque on one side of the quadrilateral war memorial.

The tower, containing the clock, and topped with a golden ball, flies the white ensign, 24/7 (a privilege granted by Queen Anne), and the ball and clock (which was regularly adjusted to the Greenwich time shown by the dropping of the red ball at the Observatory) were used as navigational points by ships on the Thames. (For this reason, the clock was the first in London to be illuminated.)

The church was not open on our visit, but the organ inside, made by the firm of Gray and Davison, and restored in 2006 by William Drake, won first prize at the Great Exhibition of 1851. 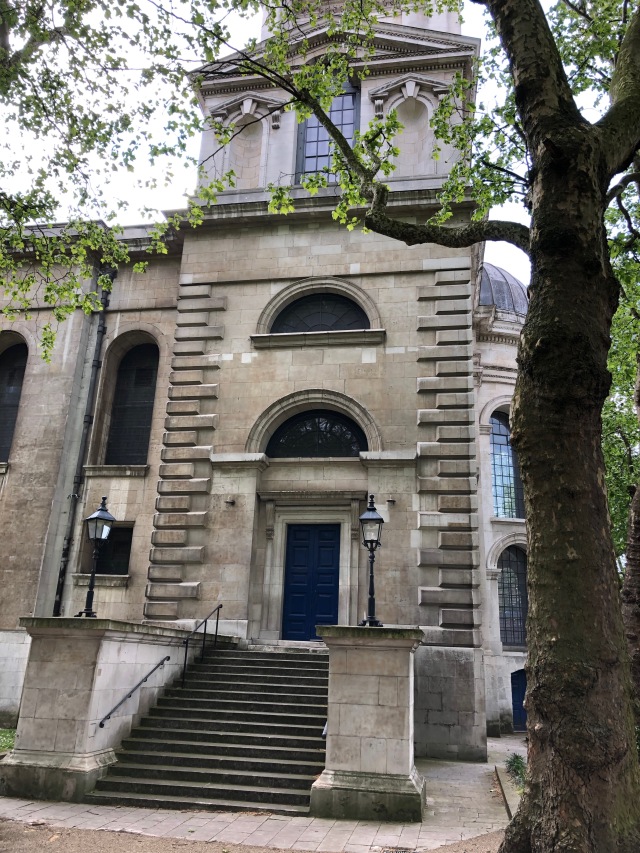 To the side of the church is the Victorian Church Institute, and just beyond it, up on Commercial Road, is the Limehouse Passmore Edwards Library (on which see the Gentle Author, here), about to undergo the apparently normal fate of all interesting, historical and attractive building in the East End, i.e. transmogrification into the bland verging on ugly, in this case for student accommodation. 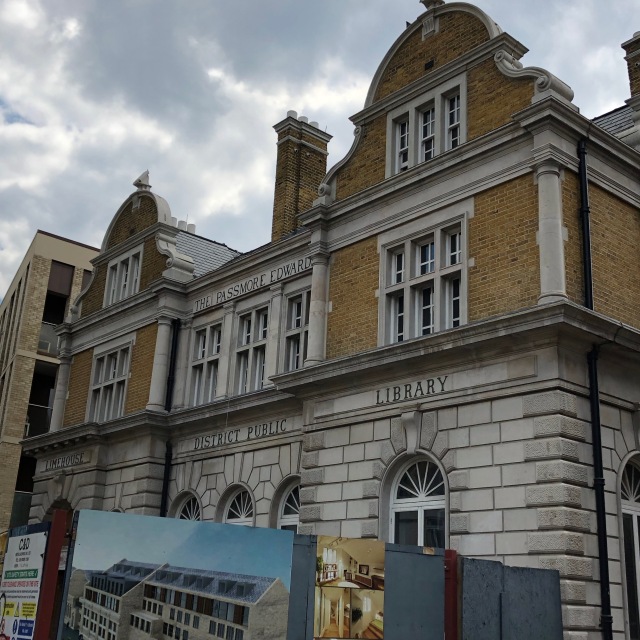 Next to the ex-library is the Catholic church of St Mary Immaculate and St Frederick, finished in 1934, though a mission to the very many Irish workers who by then lived in Limehouse had begun in 1881.

If you know where to look, a statue of a red-robed Christ, remarkably like a ship’s figurehead, pops up among the surrounding buildings – like St Anne’s tower, it is a landmark from the river. (I had to look up St Frederick, and discovered that there are two: the church is dedicated to St Frederick of Utrecht, grandson of King Radboud of Frisia, stabbed to death in murky circumstances in 838.)

The church of St Mary Immaculate and St Frederick, Limehouse, with the statue.

We strolled back towards Ropemaker’s Field (mentioned by Pepys in 1664) where there is a fairly new park and playground:

one of the regular exercise sessions was in progress at the bandstand. Parallel with the river is Narrow Street, where some of the wharfside warehouses, now mostly houses and apartments, still keep their original designations. 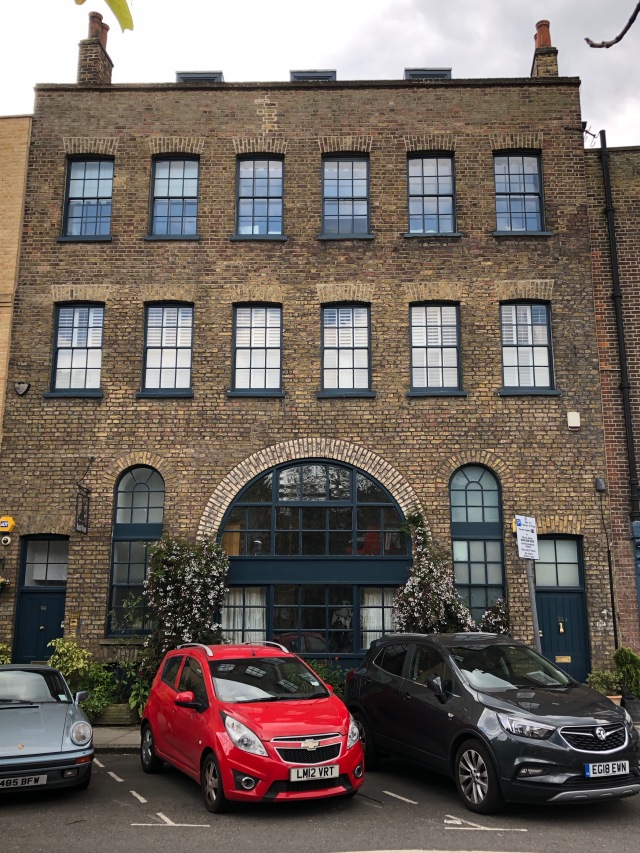 This part of the street is enlivened by a pretty aggressive-looking herring gull, sculpted by Jane Ackroyd and erected in 1994.

Then up through the park, alongside Stephenson’s arches (and some nicely planted palms in crates)

to the hubbub of Commercial Road again, and across to our own relatively peaceful enclave near Stepney churchyard, where, it appears, a parakeet family is indeed being raised in the hole in a plane tree they were inspecting a month or so ago. 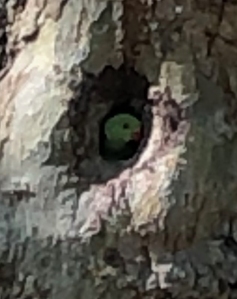 Altogether, a good morning’s walk – and nobody told us that they didn’t fancy our sort of bloke in these parts.

5 Responses to In Deepest Limehouse