I begin with an appalling confession, made because of my reasonable confidence that nobody (least of all @TheMuseumOfLiz) actually reads this stuff … Here goes: although the Golden Jubilee of my arrival in Cambridge is only just below the horizon, I have never, before today, visited the Sedgwick Museum of Earth Sciences. Feel free to gasp in horror.

I could put it down to having been traumatised, back in the day, by my walking at night, after college interviews, up an apparently endless Pembroke/Downing Street in the faint hope that I would eventually find the railway station. (I should explain that I had never taken a taxi before and had no idea how much of the very small amount of money I had on me it might cost.) Those high walls on both sides of the road, pierced occasionally by forbidding archways and gates, made an indelible impression of dark and dread …

The Museum is the last section of the building on the right, before St Columba’s church. (The pelican crossing is a relatively recent innovation.)

But in fact it’s more likely that (another confession) I have never been very interested in geology – though I am extremely interested in the lives of the men and women who made it into a science, especially that circle of Cambridge men (almost all of them clergymen) who encouraged the developing thought of Charles Darwin and have to an extent been subsequently overshadowed by him. 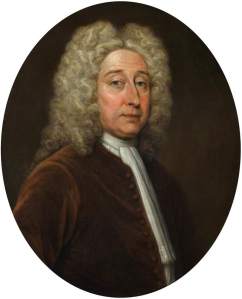 Cambridge boasts the distinction of having the first professorship of geology in Britain, endowed by the bequest of John Woodward (?1665–1728), physician, natural historian and controversialist (expelled from the Council of the Royal Society in 1710 for insulting Sir Hans Sloane and refusing to apologise), who also left the University his own collection of British ‘fossils’ (which includes rock and mineral samples as well as what we would now call fossils); the University later bought his collection of foreign materials (see below) as well, and they are all preserved in the Sedgwick Museum.

Sorry about the reflections of reflections – this is the reconstruction of Woodward’s collection inside the Museum. Note the beautiful cabinet!

The ODNB describes Woodward, who was born in Derbyshire, as apprenticed at the age of sixteen ‘to a London linen draper, where he was discovered by Peter Barwick, physician to Charles II. Barwick took Woodward into his house and taught him his profession, helping him obtain the post of professor of physick at Gresham College in 1692’. (I do like a good story about the humble apprentice from the country who is talent-spotted in the big city …)

In 1695 he was given a Lambeth MD degree (I’ve just looked it up, and Lambeth degrees still exist!) by Archbishop Tenison, and Cambridge similarly honoured him in the same year.

It may have been this distinction that caused the endowment, as Woodward’s professional life was centred on London, where one of his patients was Sir Richard Steele. Believing strongly in what today would be called evidence-based medicine (as opposed to a touching faith in the nostrums of the ancients), he was once involved in a duel with an opponent when a pamphlet war got out of hand, and rather wittily commented that ‘he preferred to die by Mead’s sword than by his medicine’.

In parallel with his professional and academic life, Woodward was also a collector (of antiquities as well as ‘fossils’), and published widely on the history of the earth as well as on the principles of collecting: his most famous work is probably Fossils of All Kinds: Digested into a Method, Suitable to their Mutual Relation and Affinity (1728).

A large part of Woodward’s own collection was obtained from the Sicilian artist Agostino Scilla (1629–1700), also a collector, who urged that fossils are the remains of living organisms from earlier epochs rather than ‘jokes’ by Nature or by Nature’s God. The Sedgwick Museum has provided a translation of his argument, published as La vana speculazione disingannata dal senso (1670) here. 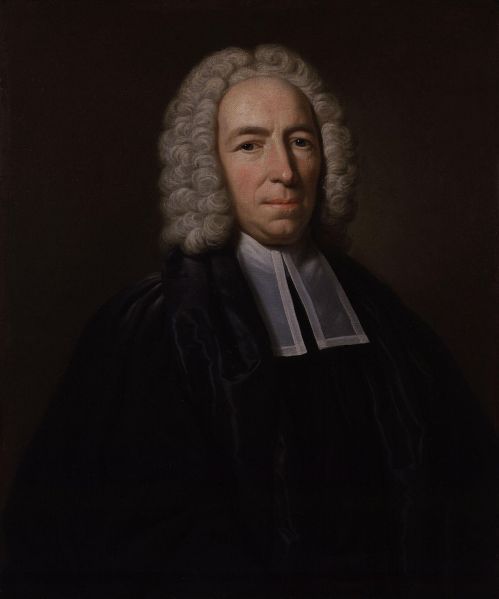 The first Woodwardian professor was another controversialist, Conyers Middleton (1683–1750), who was embroiled in one of Richard Bentley’s notorious feuds with the fellowship of Trinity. His take on fossils seems to have been that studying them would encourage belief in Noah’s Flood, but he only held the chair for three years, between the death of his first wife and his marriage to his second.

The marriage thing was a recurring problem (since Woodward had stipulated that his professor be a bachelor): the distinguished natural philosopher and rector of St Botolph’s, John Michell (1724–93), who inter multa alia predicted black holes, held the post for only two years before he was drawn off into matrimony;

likewise John Hailstone (1759–1847), who was professor for thirty years before succumbing to marriage in 1818 and retiring to be vicar of Trumpington. (Romilly claimed after his death that Hailstone had four illegitimate children, and he definitely enhanced his income by successful gambling on horses.)

Hailstone’s retirement was massively Cambridge’s gain, in that it led to the appointment as Woodwardian professor of Adam Sedgwick (1785–1873), a vicar’s son from Dent in Derbyshire, whose massive achievements I could not possibly summarise (not least because they are mostly based on a deep understanding of mathematics and physics). Suffice it to say that (with other giants of his time such as Whewell (who like him was first seen by Cambridge standards as unsophisticated and uncouth), Murchison, Henslow and Lyell (to say nothing of St John’s College graduate William Wordsworth), Sedgwick revolutionised the then current understanding of rock strata and the epochs to which they bear witness. (He also, together with Henslow, founded the Cambridge Philosophical Society, which celebrates its bicentenary this year: E.D. Clarke of Jesus was another early member.)

Adam Sedgwick in old age, by Robert B. Farren. (Credit: Department of Earth Sciences and Sedgwick Museum, University of Cambridge)

The relief showing an iguanodon and a megatherium, on the Museum’s Downing Street façade.

The current Sedgwick Museum, his memorial, was opened in 1904, after many years of planning, false starts and really annoyed and despairing architects. (The burgeoning collection had been housed (and outgrown its space) in the Cockerell Building behind the Senate House, now the Squire Law Library.)

Robert B. Farren (1832–1912), ‘Life in the Jurassic Sea “Duria Antiquior” (An Earlier Dorset)’, on display in the Museum above fossils acquired by Sedgwick from Mary Anning. (Credit: Department of Earth Sciences and Sedgwick Museum, University of Cambridge)

It seems to me that it is currently an odd, though definitely beguiling, mix of modern theories of museum display and interpretation and case after case of traditionally laid-out Stuff. (I imagine that work is continually going on to tip the balance of the content from the latter to the former.)

There is an excellent display of minerals in honour of Whewell,

The young William Whewell presides, with an enigmatic smile, over the minerals, …

… which include these opals.

a fascinating (if alarming) explanation of volcanic action and earthquakes (including a real-time display of ongoing seismic events around the world), and – unsurprisingly – a large exhibition on Darwin the geologist (which, we are properly reminded, is what he assumed he would become, once he realised that he (literally) couldn’t stomach medicine and didn’t want to become a country parson), and the subsequent research on his collections and conclusions. And at the very entrance, in a glass case, is a pair of Sedgwick’s hobnail boots, left behind at Lyell’s family home in Scotland in 1827, and donated to the Museum in 2018 by the latter’s descendants. (He may have suffered from bunions.)

And of course there are the features which have been led to the Sedgwick’s short-listing this week for the ‘Family Friendly Museum’ Award: the gigantic fossil animals, the shelves of children’s book, the electronic displays and the games and puzzles (and, dare I say it, the alluring display of small and glittery chunks of minerals in the shop). I should have gone years ago (and taken the children, oh the guilt), but I repent, and will be back, with the grandchildren.

A nice selection of toadstones. 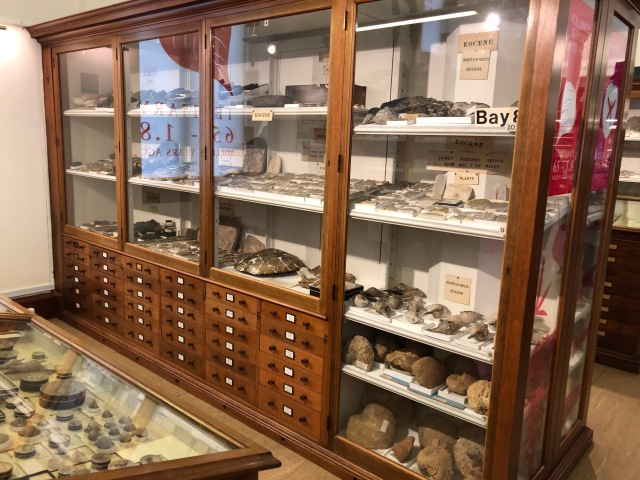 One of the display cases, with (locked) trays underneath.

Some chalk, and the fossils contained therein.

The Museum has three copies of William Smith’s strata map (which was continually being updated over four years from its initial publication in 1815). This one, signed by Smith in 1816, was found in a box at the Museum in 2013. It has been cleaned and conserved, and now hangs behind a special grade of protective glass.

Lord Tennyson, who had studied under Whewell, presented the Museum with fossils he had found near Farringford House, his home on the Isle of Wight.

Part of a collection of cubes of building stone, assembled by John Watson (1842–1918), who had worked in the maufacture of Portland cement, but spent his retirement in collecting and cataloguing these specimens, which he presented to the Museum. (He sadly died after falling off a ladder in his Cambridge garden while pruning a fig tree.) 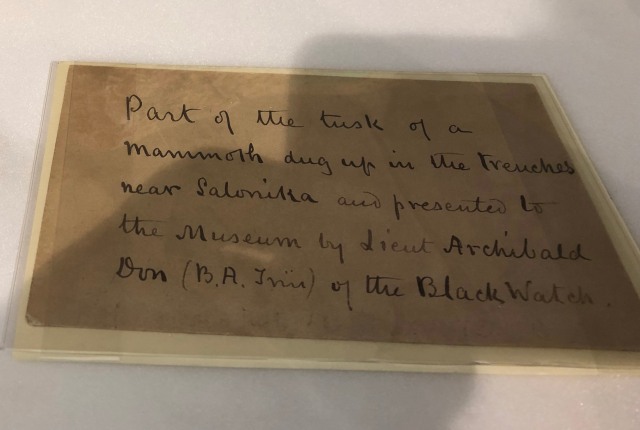 Tragically, Don, a Trinity graduate who was a pacifist and had intended to train as a doctor, died of malaria in Salonica (Thessaloniki) in 1916.