There are various reasons (excuses), some flimsier than others, for the long delay since I last put quill to vellum. First, there was the Mill Road Winter Fair, which took up all my spare time for several weeks; then there was 12 December, which left me stupefied for several days; then there was a technical problem (not of my making, and still not fixed!) with one of my main sources of information; then there was a physical problem with my right arm; and then of course there was Christmas, which produced the usual paradoxical First-World-Problem response – how is it possible to have a wonderful two weeks with all my family around me, and lots of practical help, and yet be completely exhausted by the end while swearing that I certainly won’t have the energy to do it all again next year?

One of the best few hours over the festive period was spent watching Ingmar Bergman’s 1975 film of The Magic Flute with a three-year-old, who, somewhat to my surprise, stuck with it, laughed appropriately and proceeded to role-play the story for the next few days. I fear that the moral (despite my best efforts) may have been wasted on her, as she became the Star-Blazing Queen of the Night (we made a crown), and her mother was Pamina, whom she sternly enjoined to kill with this knife Baby Sarastro (her younger sister – with whom, I hasten to clarify, she is on very good terms …). 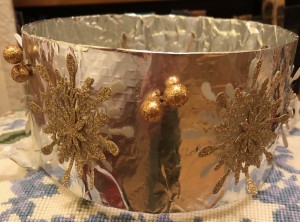 The Star-Blazing Queen of the Night’s crown, mostly recycled bits of crackers.

This came about because some of us were trying to watch the version from Glyndebourne on Christmas night. It is set in a hotel (what is this trend for setting things in hotels? – the last Meistersinger I saw was likewise (or so I thought, but I now discover that it was in fact supposed to be a gentleman’s club) – but either way it really didn’t work). I explained to the said three-year-old that the young man singing was a prince (despite his odd outfit), and that he was being chased by a fierce dragon. She took one look at the collection of linked-together plates and saucepans and said ‘THAT’s not a dragon’, in terms of great derision. Aha, I thought, you need a proper dragon … 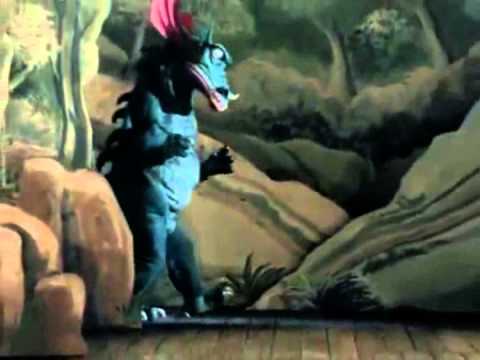 I know that from a purist point of view there are problems with the Bergman film: it’s in Swedish, he messes with one crucial plot line, alters the dialogue and changes the sequence of some events. But I have loved it ever since I first saw it in the cinema in 1975, and as a staging it is hugely better than some more recent ones I have sat through. (Talking of Glyndebourne, they did (IMHO) a wonderfully magical version early in the millennium which I was lucky enough to see but which (as far as I can find out) was never recorded and has never been revived.)

But Bergman is serious, doesn’t try to update the opera and/or wrench it out of its Enlightenment context, and films it (with regular cinematographer Sven Nyqvist) in such a way that you are prepared to believe that you are indeed watching the opera among an international audience (including Bergman himself, his wife and son, Nykvist, and Erland Josephson, Bergman’s regular leading actor) in the eighteenth-century Drottningholm Theatre near Stockholm. You are not, of course – the whole thing was recorded on film sets – but the production is very much grounded in the atmosphere of the Drottningholm which Bergman describes visiting as a boy in Bilder (Images), and which drove his approach to the opera and the mis-en-scène of the film.

He had, apparently, wanted to direct it at the Malmö Theatre, but was prevented by ‘a German opera director of the old school’ who was installed there for a year and produced ‘a monumental mastodon of a performance with heavy sets’, so that there was no likelihood of a new Flute for several years. However, he conceived instead the idea of making a television film of it: this was taken up, and the enormously expensive and enormously successful television version, first broadcast in Sweden on New Year’s Day 1975, was released as a cinema film later that year.

Bergman insisted on young and attractive singers for his pairs of lovers (he pointed out that they didn’t need to have huge voices for a filmed version), and the only one of the cast who has become widely familiar outside Scandinavia is the Papageno, Håkan Hagegård – looking ridiculously young, but don’t we all? (The three-year-old loved the way he spat out his drink as he saw the old-lady face of his bride-to-be.)

One of the most delightful elements of the film (again IMHO) is the appearance of the Three Boys (actually sung by three boys – who I guess are now in their fifties – as opposed to women) in a hot-air balloon, a stage apparatus which existed at Drottningholm.

The playbill for the first performance.

The Montgolfier brothers’ first manned flights had taken place in 1783, eight years before the premiere of the Flute on 30 September 1791, and this got me wondering about Emanuel Schikaneder’s original staging at the Theater an der Wieden and the spectacular effects which the work requires.

Schikaneder, impresario, librettist and actor, as Papageno. (Frontispiece of the libretto, published in 1791.)

There do not seem to be any surviving images from the time of the premiere, apart from the famous engraving of Schikaneder himself as Papageno (though we know from the libretto that the boys swoop down on a white cloud rather than in a balloon to prevent Pamina’s suicide). But since the work was very successful and soon widely performed in the German lands and beyond, there are numerous images of later stagings which give an idea of what was though appropriate in the first few decades after the premiere. 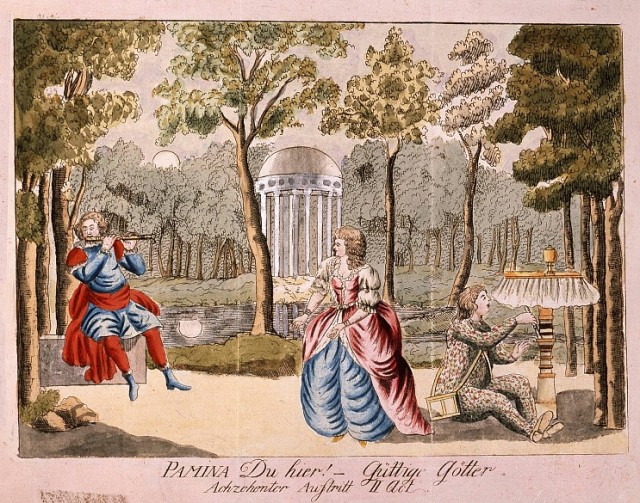 Joseph and Peter Schaffer depict the scene where, sworn to silence, Tamino plays his flute while Pamina (dressed as a conventional young lady) wonders at his neglect of her, and Papageno (half man, half bird) tucks in. 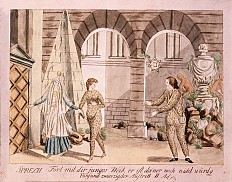 A priest leads the reluctant Papagena away from her sweetheart.

The brothers Joseph and Peter Schaffer (active around 1780–1810, about whom little seems to be known except that they produced coloured views of the cities of the Austro-Hungarian empire) created a series of illustrations of the opera which may have been intended as set designs for a performance in Brno (though this is unclear). I cannot believe that Bergman and his designers didn’t see at least the one of Sarastro arriving in his lion-drawn chariot.

The arrival of Sarastro at the end of Act 1. The costumes of the retainers, including Monostatos (who is not in black-face), are faintly Turkish. 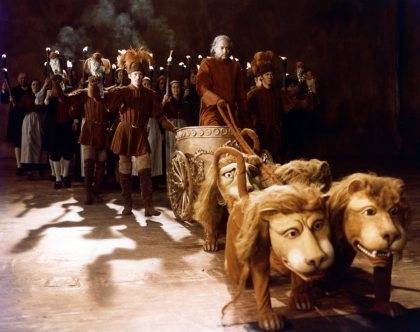 But the one image which had influenced almost every subsequent production (except, of course, those set in hotels) has to be the gouache sketch by Karl Friedrich Schinkel for the first appearance of the Queen of the Night in an 1816 performance.

Schinkel studied as an architect, but returned from a visit to Italy determined to be a painter – until he came across the works of Caspar David Friedrich, believed he could never come close, and went back to architecture.

He produced several haunting images of imaginary Gothic cathedrals in an other-worldly style not unlike Friedrich’s, but his buildings (mostly in Berlin) range from Greek Revival via Gothic to almost Modernist. He designed the original Iron Cross, and had plans (thankfully unfulfilled) to convert the Acropolis of Athens into a palace for the new Greek (Bavarian) King Otto; he was also responsible for the restoration of Schloss Rosenau, the birthplace and idyllic childhood home of Albert, Prince Consort.

Schinkel’s bravura design surely provides a setting of which any Star-Blazing Queen of the Night would be proud … and by the way, Happy New Year to you all!