The Man in the Moone

What is the oldest published work of science fiction? This is not a question to put to me, as science fiction is a genre to which I am not greatly drawn. There’s H.G. Wells and Ray Bradbury, and that other guy who, it turns out, shares my birthday, and John Wyndham, who I used quite to like in my youth, and some others …

Some claim the honour for Lucian of Samosata (who probably spoke Syriac, though his surviving works are in Greek), who described being whisked to the moon in a whirlwind in his Ἀληθῆ διηγήματα, Vera Historia or True History (a narrative which he undercuts at the outset by saying that none of it is true). You could argue that the Epic of Gilgamesh, or indeed the Judaeo-Christian creation story, is early science fiction … But in terms of what we now think of a science fiction, a claimant to be the earliest story in English has to be The Man in the Moone.

The first edition, of 1638, to which Godwin’s name has been added.

The author of the work (which was published both posthumously and pseudonymously) was Dr Francis Godwin (1562–1633), who wrote it probably about 1620. (See the modern edition here for details.)

Godwin was a cleric from a family of clerics: his father Thomas became bishop of Bath and Wells, he married a daughter of the bishop of Exeter, three of his sons became clergymen, and his daughter married one. After various appointments in the dioceses of Bath and Wells and Exeter, in 1601 he was translated to the see of Llandaff, one of the poorest in the country: he kept his existing appointments and acquired the rectorship of the parish of Shirenewton in Monmouthshire.

By the time Turner painted the West Front of Llandaff Cathedral in 1795–6, it had undergone damage in the Civil War, and from the Great Storm of 1703. By 1717, there was talk of abandoning the see, but reconstruction began in 1734.

He seems to have complained fairly regularly of his own poverty, and also of being compelled to appoint lay readers to many of his parishes, as no minister would take up such an inadequate living. Relief came when he was given the see of Hereford in 1617, though he came a bit unstuck when he made his own son Thomas Chancellor of the see, in spite of his lacking the required legal qualification. Thomas’s appointment was challenged in a petition to Charles I in 1625, and he was forced to relinquish the role.

Bishop Francis seems not to have been completely diligent in his diocesan duties, though, as an interesting sideline on his character, he was a keen promoter of James I’s Declaration of Sports, which the king issued in Lancashire in 1617, and to the whole country in 1618, listing what leisure activities could and could not be indulged in on a Sunday. (Charles I reissued it in 1633, and William Prynne claimed this version was the work of Archbishop Laud, though in fact the wording was almost identical to the Jamesian one. Parliament ordered the book to be burned in 1643 …) 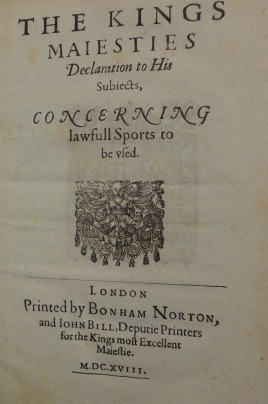 The title page of the 1618 Declaration of Sports.

The Declaration condemns on the one hand Catholics who fail to attend divine service on Sundays and Holy Days, and the Puritanical element, the so-called Sabbatarians, who promote abstinence from any kind of fun on Sundays. It prevented bear- and bull-baiting (you could, alas, do either to your heart’s content on other days), and also bowling (why?) and ‘interludes’ (presumably plays?). But the range of things you could do is extensive: ‘after the end of divine service our good people be not disturbed, letted or discouraged from any lawful recreation, such as dancing, either men or women; archery for men, leaping, vaulting, or any other such harmless recreation, nor from having of May-games, Whitsun-ales, and Morris-dances; and the setting up of May-poles and other sports therewith used: … and that women shall have leave to carry rushes to the church for the decorating of it, according to their old custom’. 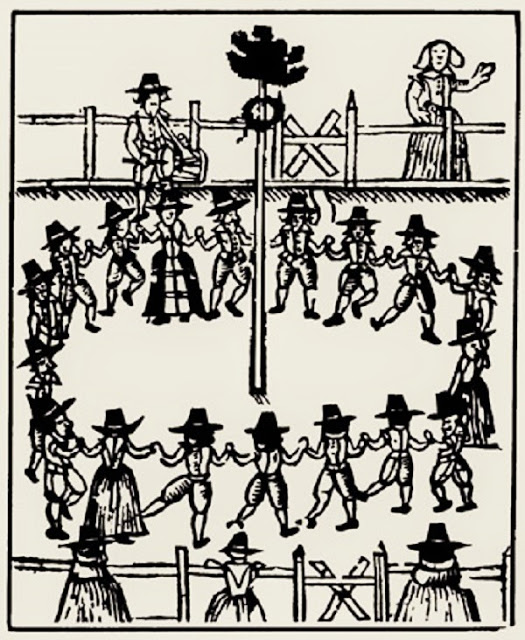 Dancing round the Maypole.

It is possible that Godwin’s enforcement of these rules came from his interest in history, writing on which seems to have taken up much of his time. He travelled through Wales with William Camden (his friend and the godfather of his son) in search of antiquities to add to the revised edition of Britannia, and he also knew the antiquary and bibliophile Sir Robert Cotton, who had been a pupil of Camden’s at Westminster, and who had travelled round the north of England with him for the same purpose.

William Camden (at the age of 58 (1609), by Marcus Gheeraerts the Younger. (Credit: the National Portrait Gallery)

Of Godwin’s own publications, the most important was A catalogue of the bishops of England, since the first planting of Christian religion in this island, together with a briefe history of their lives and memorable actions, so neere as can be gathered out of antiquity (1601), a list (with short histories) of over 600 archbishops and bishops from St Augustine onwards.

The first edition was dedicated to Sir Thomas Sackville (1535/6–1608) , Chancellor of the University of Oxford, and the second, revised, in 1615, to King James; in 1616 it was translated into Latin for the benefit of a European audience, since it asserted that the ‘Roman’ and hence ‘papal’ conversion by Augustine was in fact a reconversion, Joseph of Arimathea having brought Christianity to the country centuries earlier – a point which Elizabeth I had made in 1559 to those Marian bishops who wanted her to submit to the pope: ‘This author [Gildas] testifieth Joseph of Arimathea to be the first preacher of the word of God within our realms. Long after that, when Austin came from Rome, this our realm had bishops and priests therein, as is well known to the learned of our realm by woeful experience, how your church entered therein by blood; they being martyrs for Christ and put to death because they denied Rome’s usurped authority.’

Joseph of Arimathea and the miraculous Glastonbury Thorn.

The Man in the Moone takes account of Copernican astronomy, and shows familiarity with the theories of Galileo and Kepler; it also seems likely that Godwin had read his Hakluyt and his Purchas. Its influence was considerable: his description of the Lunar language is thought to have influenced Jonathan Swift’s account of the Laputans in Gulliver’s Travels (Swift was in fact a distant relative of Godwin’s). 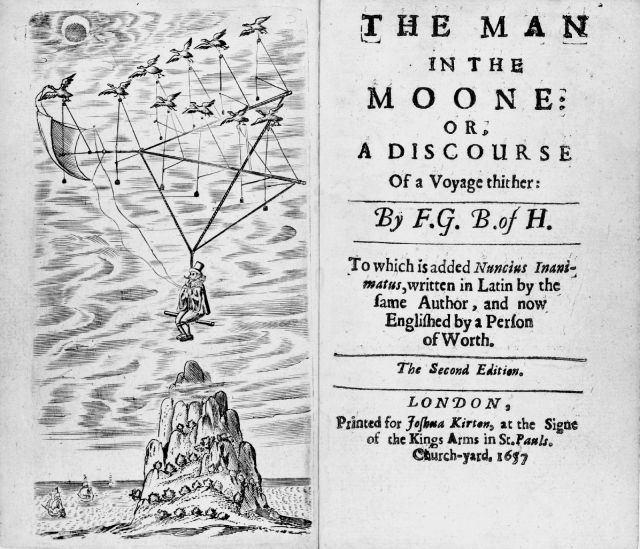 The frontispiece and title page of the 1657 edition, with Godwin’s initials.

The frontispiece of the Dutch version, 1659.

It was translated into French (probably influencing Cyrano de Bergerac), Dutch and Spanish. 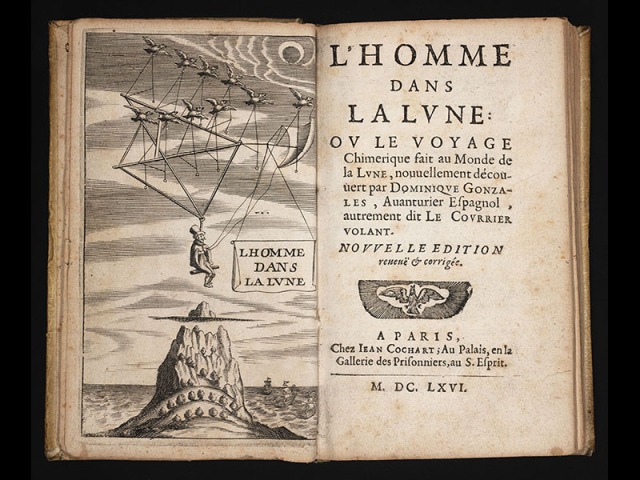 There was also a so-called ‘second edition’ (there had been several further editions in the seventeenth century) of 1768, with the modified title, The Strange Voyage and Adventures of Domingo Gonsales, to the World in the Moon, which kept the story alive. It later received attention from Edgar Allan Poe and Jules Verne (both of whom apparently believed it had been written in French) and thence down to Wells, etc. etc.

and a synopsis of the plot: 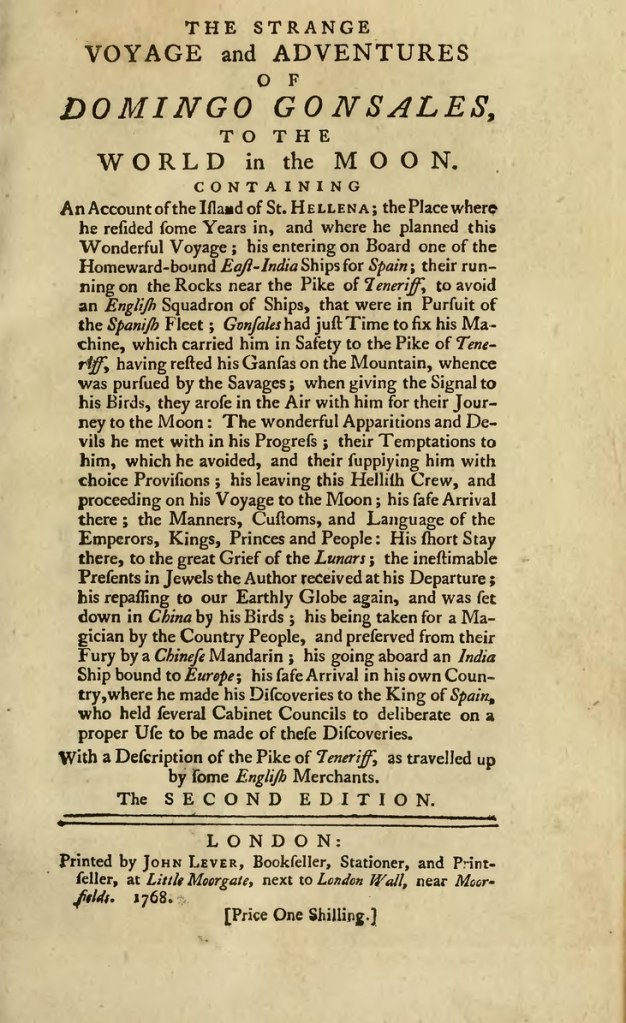 That the story passed into a wider public consciousness is evidenced by this plate, now in the Fitzwilliam Museum as part of the Glaisher Bequest:

It was made in 1740 at the pottery of Richard Frank in Redcliffe, Bristol, and painted (probably) by one Joseph Flower: the back is signed ‘I.F./1740’. I’m sorry the picture isn’t brilliant, but the image is clearly taken from the frontispiece of the book, where Gonsales is wafted into the sky by obliging geese. (Several of the accounts I have read of the book struggle with the etymology of the ‘gansa’, as he calls them, but surely it’s just the German ‘gans’, a goose?)

We can’t know what prompted Godwin’s flight of fancy (which at one point was believed to be a jeu d’esprit of his early youth). Perhaps he wanted a break from his earnest historicising and his episcopal duties – the intellectual equivalent of the ‘leaping, vaulting, or any other such harmless recreation’ that he promoted in his diocese?

Like Loading...
This entry was posted in Art, Bibliography, Biography, History, Museums and Galleries and tagged flight to the moon, Francis Godwin, geese, James I, science fiction, seventeenth century. Bookmark the permalink.

2 Responses to The Man in the Moone