One of the perks of my part-time employment is that my job description includes an injunction to open the mail, which regularly contains interesting Stuff, not least the beautifully designed and printed catalogues of auction houses trying to tempt us with their wares. (Other perks include trying to pretend I am trotting purposefully (as opposed to walking slowly and self-indulgently) through gallery after gallery of the most wonderful art imaginable, outside visitor hours …)

It was in this context that, a few days ago, I came across the name of Fede Galizia, and was reminded that back last autumn I had planned to find out more about her and her remarkable works. I suspect that this was in the context of women painters, and that the ensuing frenzy of Christmas drove the thought from my mind.

‘Fede’ (Faith) is an unusual name for a girl in Italy. Limited research in those websites that tell you the most popular boys’ and girls’ names doesn’t come up with it among the top 100, and in fact it seems to be used rather more as a diminutive of the boy’s name Federico. None the less, the miniature painter Nunzio (Annuncio) Galizia (originally from the Trento but by then living and working in Milan) gave this name to his daughter some time around 1578. Her date of birth is not certain, as it is derived from a portrait bearing an inscription which describes ‘Fides Gallicus’, most chaste virgin, as painting it in her eighteenth year, 1596 – fair enough, so long as the wording is both is contemporary and accurate.

The inscription on Galizia’s portrait of Paolo Morigia (see below).

In that case, she must have been 12, and a child prodigy, when she was referred to by her father’s friend, the now-blind former artist and author Gianpaolo Lomazzo (1538–92) as ‘dandosi al’imitation de i più eccellenti dell’arte nostra’ (‘devoting herself to the copying of all the most excellent of our artists’) in his Idea del Tempio della Pittura of 1590.

The title page of Lomazzo’s work.

Interestingly, she is mentioned immediately after another daughter of a painter, Prudenza Profondavalle, also living in Milan, though her family were originally glass-painters from Leuven in the Low Countries, their name being formerly Diependale (Deepdale).

Fede practised as a painter of portraits, still lives and religious images, including altarpieces for local churches. 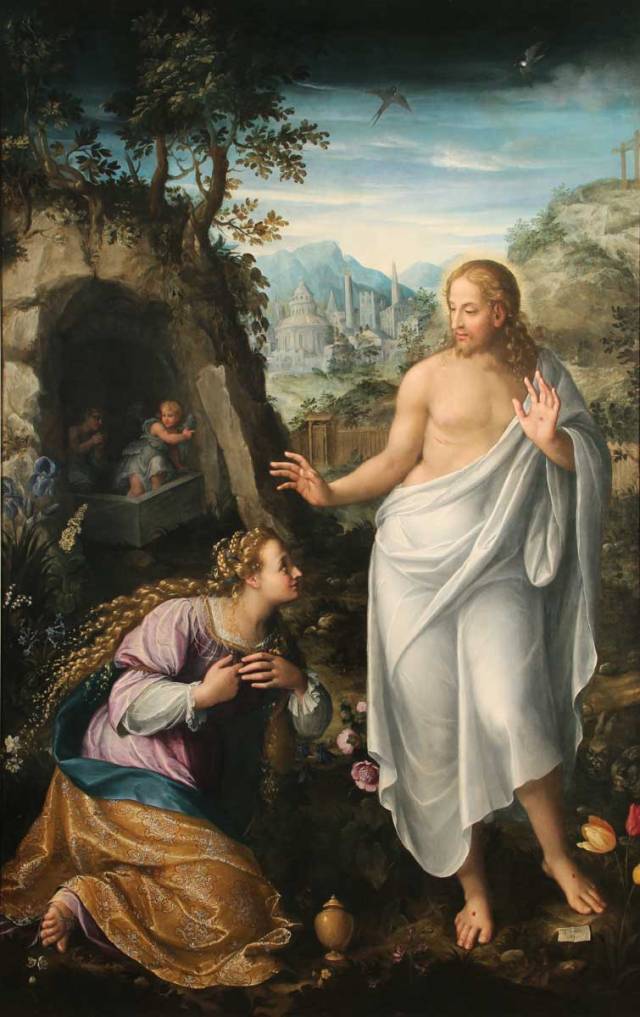 Fede Galizia, ‘Noli me tangere’ (1616), painted for the church of Santa Maria Maddalena, Milan, which was destroyed in 1798. (Credit: Pinacoteca Brera, Milan)

It is thought possible that this painting of Judith and Holofernes, one of several she produced with the same subject, includes a self-portrait as the widow Judith, who saved her community from the Assyrian plunderer. 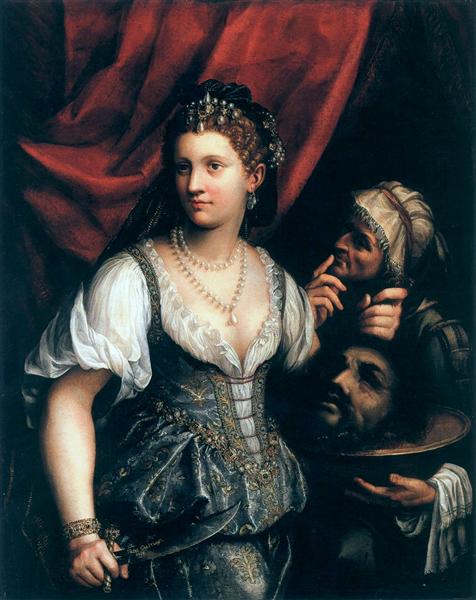 Fede Galizia, ‘Judith with the Head of Holofernes’ (1596). (Credit: the Ringling Museum of Art, Sarasota, Florida)

Portraits of her contemporaries, such as this one of the Jesuit Paolo Morigia, who was apparently a patron, show a delight in detail – look at the pile of books, with labelled fore-edges, and the reflection of the room in the old man’s spectacles – and a technical mastery which are extraordinary for an eighteen-year-old.

Fede Galizia, ‘Portrait of Paolo Morigia’ (1596). The priest is apparently writing a poem about the painting. Note the inscription at the top, from which Fede’s birth date is derived. (Credit: Biblioteca Ambrosiana, Milan)

Disappointingly, little more seems to be known of Fede’s life (summarised here), except that she was apparently unmarried, made a will on 21 June 1630, and died some time afterwards, possibly of the plague, which was then ravaging northern Italy. Her only surviving relatives were a nephew and a cousin, and she bequeathed her estate (mostly her paintings) to the Theatine order (one of whose founders was the later Pope Paul IV, who introduced the Roman ghetto, the Index librorum prohibitorum and fig-leaves on statues).

Sixty-three works are confidently ascribed to her, forty-four of them being still lives of a quite magical quality. She was a pioneer in this field, one of her pictures, dated 1602 being allegedly the oldest dated still life by an Italian. It is said that she was influenced by the arrived in Milan of Jan Breughel I in 1595, but one wonders if she knew the Flemish Valleprofonda family and through them the more general northern developments in the genre? Tenuous, I admit, and it’s also argued that she was influenced by Caravaggio, but it seems to my entirely amateur and ignorant eye that her works owe more to northern than to southern influence. 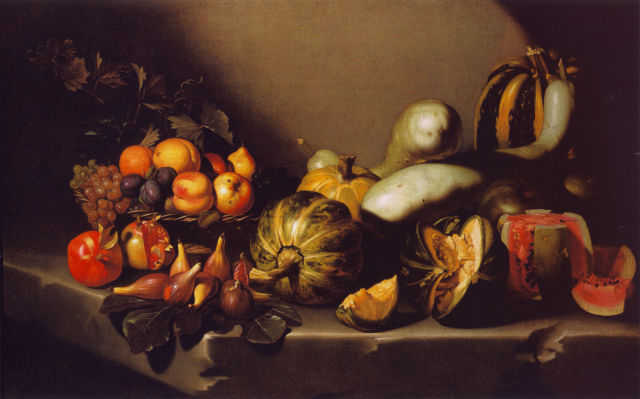 It’s also interesting to see her re-use of material: not just the re-working of a theme with slight variations in e.g. the type of fruit, as here: 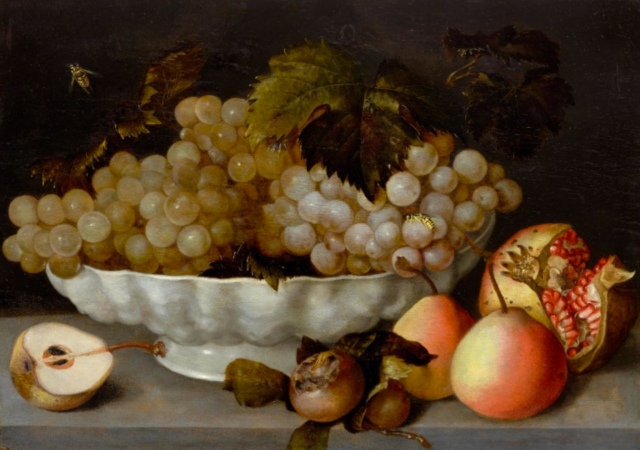 Bowl of fruit with a pear half.

Bowl of fruit with a dropped grape.

but also in the use of the same props, such as the bowl in the two pictures.

Fede Galizia, ‘Cherries in a silver dish’. The butterfly is reminiscent of the paintings of Giovanna Garzoni (1600–70), whom Galizia is believed to have influenced. (Private collection) 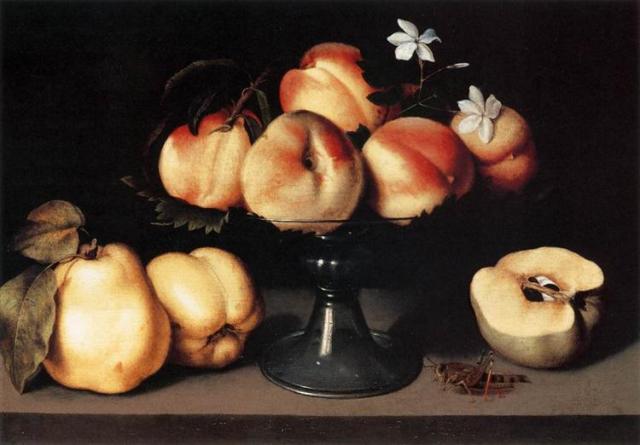 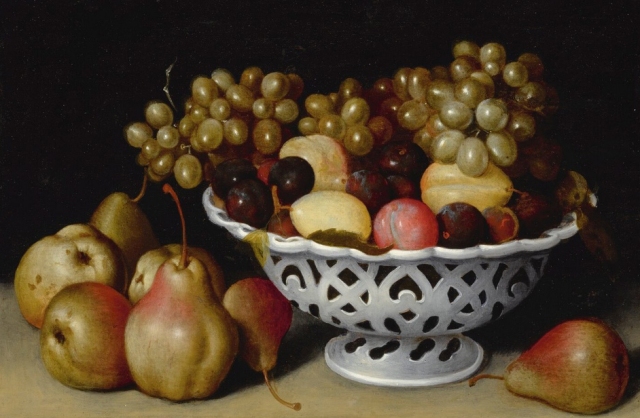 The other half of the pair sold by Sotheby’s in 2018. Note the pierced ceramic bowl.

For those of us not quite in this league, Fede’s work is on public display in Prague, Warsaw, Florence (the Uffizi), Milan and the Met in New York. The Royal Collection has one, ‘Still Life with Cherries’, formerly believed to be by a Dutch artist, but now reattributed – largely because the pierced fruit-bowl looks familiar (see the pictures above and below). I wonder how many more paintings, in both public and private collections, are waiting to be reattributed to this wonderfully talented woman?