This was going to be Object of the Month for November 2019, but various unfortunate events from a database problem up to Covid-19 have rather got in the way. However, onwards and upwards!

A jug with portraits of the lawyers and politicians Henry Brougham and Thomas Denham, surrounded by roses and thistles. (Credit: the Fitzwilliam Museum: C.1124-1928)

This highly coloured, crude and not very distinguished-looking jug – the sort of ‘tawdry’ that might have been bought (or won) at a fair – was, in its day, a relatively large barrel of gunpowder. I hardly need say that it arrived in the Fitzwilliam Museum as part of the bequest of Dr J.W.L. Glaisher in 1928. Its place of manufacture is not known, though it is certainly English. As for its date, it can be tied with great certainty to the year 1820, when Henry Brougham and Thomas Denman, MPs, were united as defenders of the cause of Queen Caroline, unloved and separated (rejected, cast-off) wife of George IV.

As Prince of Wales, the eldest son of George III, then as Prince Regent from 1810 to 1820 and finally as king (1820-37), George was not popular. His colossal extravagance (his debts on his death were reckoned to be in the region of £64 million in today’s money), his womanising (the number of his illegitimate children is debated, but he had at various times at least eight mistresses from across all social classes), and his drinking, made him the butt of endless satires and cartoons – by Rowlandson and Cruikshank among others; and, famously, The Times commented upon his death, ‘There never was an individual less regretted by his fellow-creatures than this deceased king. What eye has wept for him? What heart has heaved one throb of unmercenary sorrow? … If he ever had a friend – a devoted friend in any rank of life – we protest that the name of him or her never reached us.’

George Cruikshank’s take on the 1812 birthday celebrations of the Prince of Wales. His current mistress wears his crown; her husband sits gloomily contemplating an unappetising bill of fare; while the starving poor comment from outside the window.

As a quid pro quo for a (temporary) discharging of his debts, George was forced to marry his first cousin, Princess Caroline of Brunswick, on 8 April 1795. There are a great many anecdotes attached to this ill-fated pairing, of which the best known is that on first seeing the princess (to whom he had already appointed his mistress, Lady Jersey, as  Lady of the Bedchamber), George asked for a glass of brandy, as he felt faint. (Caroline in turn complained of his obesity, which came as a surprise to her since he had been tactfully slimmed down in the only portrait of him she had seen.) Nine months later, Caroline gave birth to Princess Charlotte, her only child (in spite of later gossip), and in 1796 the pair began to live apart.

In 1806, George made an attempt (known as the ‘Delicate Investigation’) to discover evidence of adultery by Caroline which would enable him to divorce her and cut her off from all contact with Princess Charlotte. (Among those subjected to enquiry was Sir Thomas Lawrence, who had painted Caroline (and her daughter) on many occasions, but who later became a favourite painter of the Regent, supplying, among many other pictures, the portraits for the Waterloo Gallery at Windsor Castle.)

This cartoon by John Marshall, published in September 1820, shows the queen and king enacting the old proverb of the pot calling the kettle, in reverse. The ‘green bags’ stoking the flames are the green baize bags of evidence carried into court. Of the sticks of wood fuelling the queen, ‘Broom Stick’ is Henry Brougham, ‘A Bit of Wood’ is Sir Matthew Wood, Lord Mayor of London and radical politician, and ‘Bergami Pear Tree’ (cf. the Italian Bergamo pear) is Bartolomeo Pergami, Caroline’s Italian factotum (and alleged lover). George’s supporters are written in his flames. (At the exhibition George IV: Art and Spectacle at the Queen’s Gallery (reopening today, apparently!), this was almost the only image of his wife.)

The public at large for most of this period seems to have been inclined to regard the royal couple as each as bad as the other. However, after George IV succeeded to the throne and (having failed to bribe her to stay out of the country) attempted to divorce Caroline via a bill of pains and penalties which would strip her of her title and end her marriage by Act of Parliament, she returned to England to reclaim and maintain her rights.

She had been met at St Omer by Henry Brougham (her long-standing legal advisor and sympathiser, sent to offer her the said bribe), but she promptly made him her attorney-general, and he and Thomas Denham (her solicitor-general) were her advocates in the trial by Parliament, which began in the House of Lords on 17 August 1820. Brougham (1778–1868) was a child prodigy from Westmorland, born and educated in Edinburgh, and whose career as a lawyer, journalist, politician, abolitionist, educational reformer and (eventually) Lord Brougham and Vaux, Lord Chancellor of the United Kingdom is chronicled in his autobiography, published posthumously by his instruction in 1871. From the list of activities above, you will not be surprised to learn that he was a Whig, and therefore almost inevitably opposed to the king.

Thomas Denman (1779–1864) was also a lawyer and a committed Whig, abolitionist, reforming politician, and (eventually) Baron Denham of Dovedale, Lord Chief Justice of England. He had been a close friend of Brougham since their days as junior barristers at Lincoln’s Inn.

The Queen’s return, and her subsequent daily visits to Westminster, were greeted by enthusiastic crowds, and as the trial progressed, public opinion veered rapidly in her direction, not only because the ‘evidence’ of her immoral behaviour produced by the king’s side (and collected by his agents a few years earlier when Caroline was living in Italy) was so thin, but also because Brougham’s oratory (his speech was spread over two days) was so convincing that at least one peer rushed from the chamber in tears. In the face of the now overwhelming popularity of the queen, the government refused to take the bill any further, and Caroline, though not strictly acquitted, was vindicated, and attended a thanksgiving service at St Paul’s cathedral on 29 November, again accompanied by cheering crowds.

The Trial of Queen Caroline, by Sir George Hayter (1820–3). (Credit: the National Portrait Gallery) Brougham is turned towards us at centre front, with a document in his right hand; Denman is in right profile, looking up at Brougham as they confer; and the queen sits behind them. (Most of the people in this group portrait are identified on the NPG website.)

The end was sad: already at the moment of her triumph, the tide of opinion was beginning to turn again, as witness this epigram, doing the rounds in late 1820: ‘Most Gracious Queen, we thee implore / To go away and sin no more; / But, if that effort be too great, / To go away, at any rate.’ Famously, Caroline was barred (literally) from her husband’s coronation in July 1821, and she eventually agreed to move abroad again in exchange for £50,000 per annum, but before this could happen, she was taken ill, and died on 7 August 1821.

Two views of a ‘Caroline’ jug, inscribed with the names of her supporters (Brougham, Wood, Lushington, Williams, Waithman and Denman) in a garland round a rhyme which somewhat distorts a verse of the National Anthem: ‘As for the Green-Bag crew,/ Justice will have its due,/God save the Queen!/Confound their politicks,/Frustrate their knavish tricks,/On HER our hopes we fix,/ God save the Queen!’ On the reverse is an image of the queen. As with the jug above, the factory is unidentified. (Credit: the Fitzwilliam Museum: C.1162-1928) 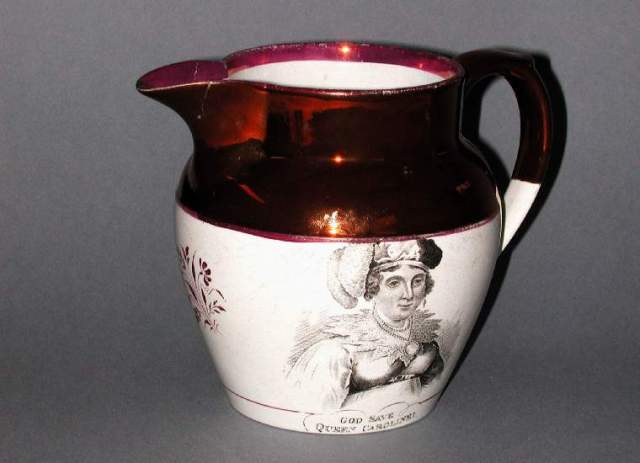 Such ceramics, tying the queen’s name to the political reforms sought by her supporters, were produced for a brief period from 1820 – ironic, given that she would have been the last person to back any radical project. These ephemeral pieces evoke a story which may have an odd little epilogue in a children’s rhyme collected by the Opies, and allegedly referring to Caroline’s attempt to storm Westminster Abbey: ‘Queen, Queen Caroline, / Washed her hair in turpentine. / Why did she look so fine? / Because she wore a crinoline.’