Object of the Month: July

While hanging around in the Fitzwilliam Museum, hoping to get a ticket for a talk on Ruskin’s Turners (I did, and it was excellent), I decided that this would be the ideal opportunity to launch a new project – Object of the Month!!!! Each month, I will choose – not completely at random – a museum artefact to write about.

I wandered (trying to escape the strong smell of solvent making its sinister way up from the basement into the shop and café) into the ceramics galleries. I have mentioned before that I am not keen on Dresden shepherdesses and the like, but I do love works which hover around the indefinable point at which utilitarian craft merges with decorative art. (Does this make me a Ruskinian or Morrisian? I do hope so!)

Take, for example, this grotesque Matthew Brothers tobacco jar, from 1897.

The delightful 2011 ‘Parenthood’, by Andrew Hull, is clearly made in imitation of/homage to the Martins, 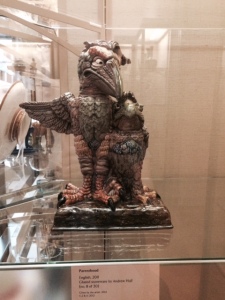 but were they themselves influenced by the grotesque ceramics of the ‘Palissy’ pottery developed by A.E. Jones and Sons of Stoke on Trent in the 1850s, and itself named after the pioneering French potter and Protestant martyr of the sixteenth century? 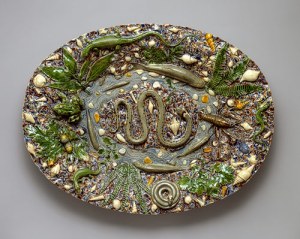 A plate by a late sixteenth-century follower of Palissy

I was tempted by this squirrel winding wool (a demonstration of the universal tenet that when you work out the right shape for a tool, it doesn’t need changing);

A squirrel winding wool: sorry about the reflections!

A nineteenth-century yarn winder, also known as a ‘swift’

but I couldn’t get a very good photo because of reflections of reflections, and in any case the label informed me that the other side of the flask portrays ‘a pornographic rabbit scene’ (which would have been a good title for this piece, if slightly in contempt of the Trades Descriptions Act). This scandalous sight is alas invisible because of the angle at which the flask (from Lyon, 1789, with an inscription referring to a ‘bordel’) is displayed, and I felt that half a flask, however charming, would be cheating my public.

I also paused at two drinkable versions of the young Queen Victoria (both Lambeth wares, c. 1837), and a rather endearing pig, with a removable head to be used as a cup (a traditional Sussex shape, apparently, revived by Frederick Mitchell at the Belle Vue pottery, c. 1870).

Queen Victoria’s profile on the side of a flask; her mother, the duchess of Kent, is on the other side.

The Sussex pig, with head as cup 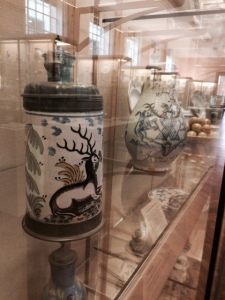 The label informs us that it is tin-glazed and painted earthenware, with pewter mounts and a cover inscribed ‘MS’ over the date ‘1804’. So, the inscription was added at least four years after the pot was made, or the pewter AND the inscription were both added to the basic pot in 1804? These are deep waters…

But I love it because of the portrayal of the stag, with five points to its horns, making it (according to various authorities) between three and four years old. (The belief that stags grow a new prong each year is apparently now discredited: but while researching online, I came across a site called ‘Improvising with your antlers’ which I sure must be required reading for stags: alas, it wouldn’t let me access it without signing up.)

In heraldic terms, the animal is couchant, and chewing nonchalantly on a torn-off leafy branch. This is not, apparently, from either of the trees between which he sits, apparently stylised willows aslant a brook, which flows around the bottom of the scene. Smaller vegetation – a flowering or fruiting shrub behind him and a flowery mead at his feet (hooves) – is cursorily sketched in, and there are puffy grey clouds in the white sky above. The impression given is of complete tranquillity, and reminds me of the happy sheep grazing on the walls of Sant’ Apollinare in Classe, Ravenna. This is the stag at rest, not at bay: though I unkindly assume that the tankard’s original owner saw it as a prey animal whose skull and antlers would at some point soon be nailed over his fireplace. 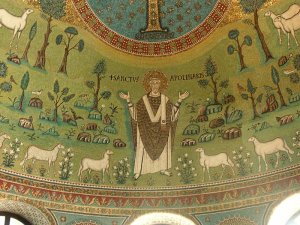 Sant’ Apollinare and his sheep, also symbolic of Christ and his disciples

The donor of this tankard (and many, many, more items) to the museum was Dr James Whitbread Lee Glaisher (1848–1928), the son of  astronomer and meteorologist James Glaisher (1809–1903) and his wife Cecilia, famous for her photographs of ice crystals and fern structures (who was herself the half-sister of Ruth Belville, the noted Greenwich horologist). With this sort of background it was perhaps inevitable that young James should become a scientist: he graduated second wrangler in 1871, and spent the rest of his life at Trinity College, Cambridge.

I quote the ODNB: ‘The number of his mathematical papers amounts to nearly four hundred, … Mention should, however, be made of his contributions to definite integrals, … and, significantly for Cambridge, to the theory of numbers particularly in connection with elliptic functions.’ This may mean more to you than it does to me.

But rather more significant for most people in Cambridge was his huge bequest: the ceramics he had begun collecting in middle age, together with his own notebooks and catalogues, and his collection of samplers (with some money), went to the Fitzwilliam, while his children’s chapbooks (almost 900 of them) went to the University Library.

The ceramics alone amounted to over 3,000 pieces, and generous though the Cambridge colleges were to their resident fellows early in the twentieth century, I couldn’t help wondering where he kept all his Stuff. An obituary in the JLMS of 1929 by A.R. Forsyth (another Trinity mathematician) sheds light: ‘ … his collections outgrew available space, downstairs, upstairs, even in his remote bedroom. He was granted an additional set of rooms at the top of his staircase and next to the upper floor of his own set; they, too, soon were filled. He then hired a sort of warehouse, that also became filled in due course. … the Fitzwilliam Museum … granted him a room (also soon filled) in the new wing…’. It must have been a nightmare for his bedder – but perhaps he did all the dusting himself?

Of Glaisher’s character, Forsythe says: ‘His smile of appreciation was delightful and infectious; when appreciation waxed into admiration, his attractive eyes would glow in his enthusiasm.’ I feel confident his eyes would have glowed whenever he examined his deer tankard.

Like Loading...
This entry was posted in Uncategorized and tagged ceramics, Fitzwilliam Museum, Glaisher bequest. Bookmark the permalink.

10 Responses to Object of the Month: July