The Deluge of Time

‘Antiquities, or remnants of history, are, as was said, tanquam tabula naufragii: when industrious persons, by an exact and scrupulous diligence and observation, out of monuments, names, words, proverbs, traditions, private records and evidences, fragments of stories, passages of books that concern not story, and the like, do save and recover somewhat from the deluge of time.’

I had been intending for some time to write my tuppence-worth about John Aubrey (1626–97), the fascinating antiquary, scientist, surveyor, painter, member of the Royal Society and all-round investigator of the quirky, whose biography the Cambridge Library Collection has reissued, along the with first published version (greatly cut and bowdlerised) of his Brief Lives.

Aubrey’s sketch plan of Stonehenge, which he surveyed with a plane table. (c) The Bodleian Library, Oxford.

However, the publication of Ruth Scurr’s amazing act of creative reworking, in which she uses the papers deposited at the Ashmolean Museum by Aubrey himself and by many of his correspondents to fashion a diary of his life, put a stop to my superfluous impudence. I return to the subject now only because I had the great good fortune to listen a few days ago at Wolfson College to Scurr talking both about Aubrey and her approach to ‘writing him’, in a fluent, entertaining and thought-provoking tour de force.

The quotation at the top of this piece, cited by Scurr in her talk, appears in Bacon’s definition of the various types of history in The Advancement of Learning, Book II. In the next paragraph, Bacon goes on to claim that ‘As for the corruptions and moths of history, which are epitomes, the use of them deserveth to be banished, as all men of sound judgment have confessed, as those that have fretted and corroded the sound bodies of many excellent histories, and wrought them into base and unprofitable dregs.’ 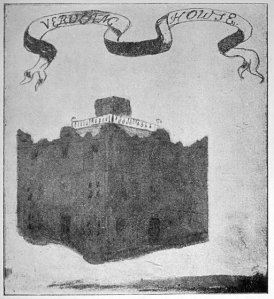 It seems to be in this spirit that Aubrey, the complete opposite of an epitomator, approached the task for which he believed he had been born: rescuing fragments from the past like a beachcomber collecting wreckage, flotsam and jetsam washed up on the shores of the present. (Did he know of Isaac Newton’s self-deprecating remark about the ocean of truth?) But Aubrey was equally insistent on the importance of preserving memorials of his own present, to pass them – however trivial they might now seem – on to the future in which his own age would have been swept away by the deluge.

Hence both his endless postponement of publication of his writings – there was always more information to seek, paste in and rework – and the criticism of both contemporaries and later writers, that he was completely undiscriminating in his selection and compilation. His writings have no narrative sweep: they are a deluge of Stuff – ascertainable facts, anecdotes, acute antiquarian observation, speculation, and gaps: his notes to self – ‘Quaere’, ‘Find out, look up, ask’ – pepper the works.

His posthumous reputation, as Scurr pointed out, was undermined partly by his failure to publish anything in his own lifetime except a compilation, called (uninspiringly) ‘Miscellanies upon Various Subjects’, which consisted of a mishmash of folk-tales, classical accounts, superstitions, quack cures and astrology – unlikely to appeal to the rising generation of the Enlightenment. And in the nineteenth century, what little was known of his work was thought to be scurrilous in the extreme, as well as lacking in any sort of coherent theme or narrative sweep. 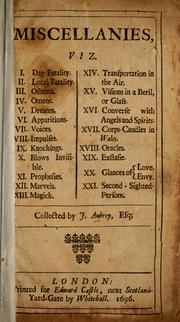 The title page of the first edition of the ‘Miscellanies’.

The reputation for scurrility (which led to a great deal of omission in John Walker’s 1813 publication of the ‘Brief Lives’ among other Oxford-related material) was not completely unjustified by some of Aubrey’s anecdotes, but was grossly and unfairly boosted by his treatment by his friend Anthony Wood, the writer of Athenae Oxonienses, for which work so much of Aubrey’s research and writing was undertaken.

Scurr explained the circumstances of Wood’s repudiation of his colleague, and of their later reconciliation: but none the less, Wood’s own account of Aubrey damns him with odd bits of very faint praise: ‘He was a shiftless person, roving and magotie-headed, and sometimes little better than crased. And being exceedingly credulous, would stuff his many letters sent to A. W. with folliries and misinformations, which would sometimes guide him into the paths of errour.’

And this account of a somewhat crazed and credulous old eccentric was immortalised (for good as well as for ill) for my own generation in the superlative performance by Roy Dotrice in Brief Lives, a stage play based loosely on the writings, by Patrick Garland (1967). Aubrey is depicted close to the end of his life, bankrupt, shabby (food in his beard), living in a room full of staggering amounts of clutter and dust, dozing, complaining about the manners of modern youth, and reminiscing, fairly bawdily. Dotrice remained on stage (alone) throughout, including the interval, where he apparently fell into a doze in his chair, startling awake and carrying on where he had left off when the house lights went down again. 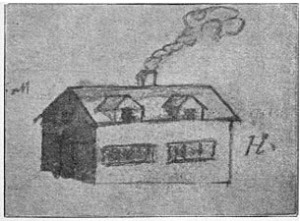 Aubrey’s sketch of Hobbes’s birthplace in Malmesbury. His biography of his mentor was written separately from the ‘Brief Lives’, but not published in his lifetime.

Scurr points out that Aubrey had the (mis)fortune to be intimate with many of the greatest figures of the seventeenth century, from Thomas Hobbes (a fellow Wiltshireman whom he first met at the age of eight and subsequently worshipped) and John Milton to William Harvey, Robert Hooke, Robert Boyle and Christopher Wren. In this company, where he was treated as an equal and a co-researcher, he is almost always overlooked, outstaged and outshone. By contrast, Scurr presents a young, intelligent, humorous, energetic figure of ‘satiable curtiosity, with a deep concern (drawn from his own experience of the turmoil and losses of civil war and family disaster) for stability, peace and tranquillity: often comic, more often tragic, but ultimately heroic in his quixotic antiquarian quest.

5 Responses to The Deluge of Time