I have to confess that I had hoped that the Persian ironwood tree, Parrotia persica, had obtained its botanical name (first applied by C.A. von Meyer in 1831) because it was observed to be a favourite perch for parrots, but alas, real life isn’t like that, and the eponymous Parrot turns out to be a German called Friedrich Parrot. Since the German for ‘parrot’ is ‘Papagei’ (as in Papageno, which had never occurred to me), there isn’t even a secondary connection, alas.

Carl Anton von Meyer (1795–1855) was, despite his German name, a Russian, born in Vitebsk (now in Belarus), and educated at the University of Dorpat (now Tartu in Estonia). His first scientific journey, in 1818, was to the Crimea, along with his teacher, the Baltic German Carl Friedrich von Ledebour (1786–1851); and in 1826, the pair went with Alexander Bunge (1803–90), another Dorpat alumnus, and professor of botany at the university of Kazan, on a pioneering expedition to the Kirghiz Steppe and the Altai mountains, publishing a four-volume flora of the region between 1829 and 1833. Meyer later held jointly the two posts of director of the imperial botanical garden at St Petersburg and director of the Academy of Sciences’ botanical museum.

The Bukhtarma valley in the Altai mountains, from an 1885 print.

He named the Parrotia in a publication on the plants discovered in the Caucasus and the area to the west of the Caspian Sea during the multi-disciplinary expedition led by General Georgi Arsenievich Emmanuel (1775–1837), a Serbian veteran of the siege of Belgrade and of the Russian war against Napoleon, with the main intention of ascending to the summit of Mount Elbrus, the highest peak in the Caucasus (whether the mountain was actually conquered on this occasion is open to dispute). 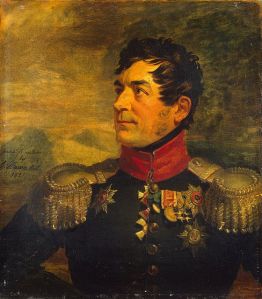 Georgi Arsenievich Emmanuel, from a series of portraits of Russian generals painted by the English artist George Dawe (1781–1829).

The reason for von Meyer’s naming of the tree after Johann Jacob Friedrich Wilhelm Parrot (1791–1841) is not far to seek: Parrot too had been educated at the University of Dorpat, studying medicine and ‘natural science’, and in 1811 undertook his own first expedition to the Caucasus and the Crimea. 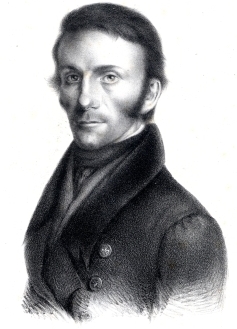 After serving as a surgeon in the Russian army towards the end of the Napoleonic Wars, he combined academic work at Dorpat with further expeditions, including one to Tornio in northern Finland; the climax of his exploring career was on 9 October 1829, when he was a member of the first European party to reach the top of Mount Ararat. Von Meyer and Parrot must have known each other, and the congruence of the dates suggests that von Meyer was honouring an acquaintance, as well as a fellow scientist and explorer, in this way. 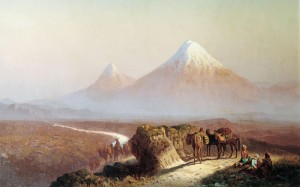 Mount Ararat, one of many views by the Russian painter Ilya Nicolaevich Zankovsky (1832–1919).

The Persian ironwood tree grows in an area of northern Iran and southern Azerbaijan, in mountainous territory. For a very long time it was believed to be the only species in its genus, but a Chinese tree, now named Parrotia subaequalis, has been determined to be a close relation in the Hamamelidaceae (witch hazel) family.

The tangled branches of the Parrotia persica in CUBG.

Both Parrotias have in common with the witch hazels a very distinctive flower which appears in late winter; but unlike the latter, they have no petals at all. Four sepals contain a dense, deep red, cluster of stamens which offer startling flashes of colour as they open: the individual stamens fade as they are exposed to air and light.

The bright red flowers emerging from the sepals in January.

The stamens as they fade.

The stamens have almost dropped, while the leaves have emerged from behind the shoot tip. 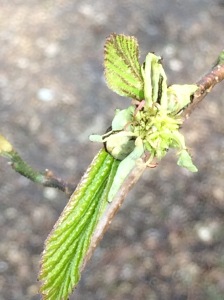 The young leaves, which when fully unfurled resemble hornbeams or beeches in shape and sheen.

The fruits are rather inconspicuous capsules, with two seeds in each, but the tree’s other great attraction is its spectacular autumn colouring: the bright green leaves change into a wide spectrum of colours from yellow through orange to red and even purple.

The bark is also very decorative, peeling in patches to create an almost three-dimensional effect with pale shades of yellow, green and brown. 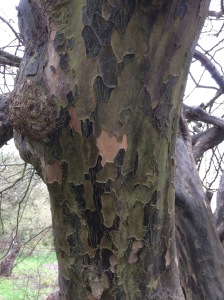 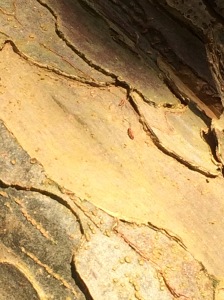 The Parrotia persica in Cambridge University Botanic Garden can be found near the Systematic Beds. The first specimens to arrive in Britain were given to Kew Gardens by the St Petersburg botanical garden in 1846, and the resulting trees were described by Joseph Dalton Hooker in Curtis’s Botanical Magazine, vol. 94 (1868), pl. 5744, but the accession notes seem to show that Cambridge obtained seeds only in 1880, so the tree is getting on for 140 years old.

(The name ‘ironwood’ appears to be given because of the toughness of the wood – not exactly a surprise – but I can’t find a reference to its use, except a vague dictionary statement that it is used in ‘certain machine parts, works of art and decorative veneers’.)

The Cambridge specimen has a peculiarity: it exhibits the phenomenon of inosculation, for which it is locally famous, and always pointed out by the volunteer guides who take parties round the garden. I had assumed that all Parrotias did it, but I have found very little mention of it elsewhere, so perhaps not?

Usually, inosculation is the process by which two branches which touch each other eventually rub away the bark, so that the two cambium layers below fuse into each other. I have seen this happen occasionally with beech trees, and it seems to occur on sycamores as well, but it is usually just a question of two branches, whereas the Cambridge Parrotia is covered with closed geometric forms – rectangles, triangles, rhomboids – resulting from the shrubby, entangling growth of the branches; in some cases close branches, not quite touching, seem to be sending out growths in an effort to make contact.

There appear to be interconnecting rootlets (???) between these two almost touching branches?

It grows up from the base as four trunks around a circular dip which often contains stagnant water.

The four-stemmed base, two weeks ago …

… and today, when a lovely blue squill (???) has sprung up around the base. 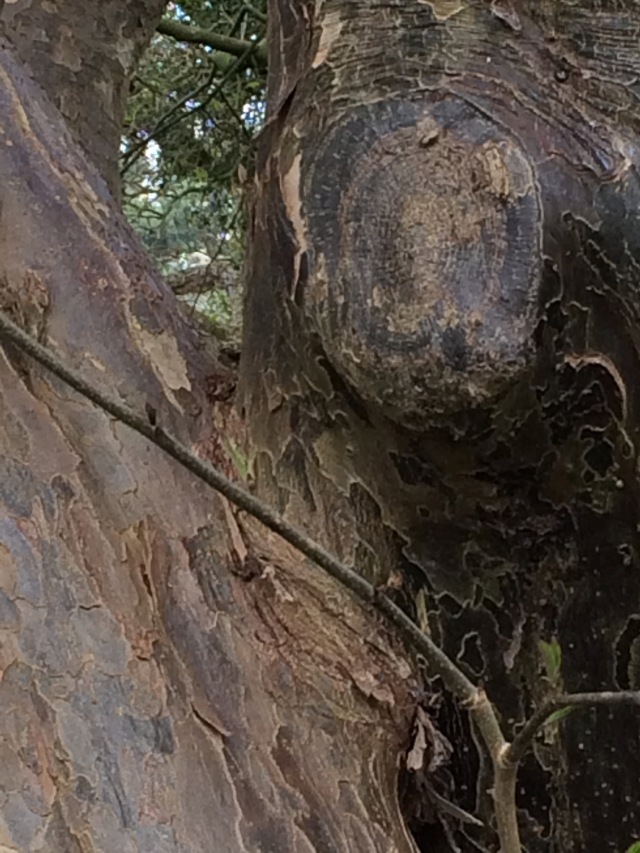 Two of the trunk stems are fused.

The canopy is high, but many of the branches droop low, so it is possible to duck under them and then stand at full height inside, and be almost invisible when the tree is in full leaf. At the moment, the leaves are just beginning to burst, and the red stamens have shrunk and turned green. Later in the summer, it will be like a shady cave, and the autumn colour will be wonderful. I’d just like to find out more about its extraordinary tendency to inosculation …