I’ve recently had the pleasure and privilege of not one but three ‘private views’, with talks, of the new exhibition, ‘Madonnas and Miracles’, on at the Fitzwilliam Museum, Cambridge, until 4 June. I’ve also popped in several times for a further mooch round, and therefore can confidently pronounce that I really, really like it. It’s not an amazing, stunning blockbuster like last year’s incredible ‘Colour’, and there’s not (thankfully?) quite so much to take in, but it is just as interesting, and benefits from a similar multi-disciplinary approach. And it also has, in spades, that potentially ambiguous virtue, charm.

Usually, something described as ‘charming’ isn’t: indeed, the adjective would tend to make me reach for my gun, if I had one. But I can’t think of a better word to describe the combination of the exhibition’s very imaginative build and layout and the moving quality of many of the objects on display, especially the naively painted ex-votos offered to churches as a mark of petitions answered. There is very much a feeling of ‘sancta simplicitas’ (as Jan Hus is alleged to have remarked of an elderly peasant cheerfully adding faggots to the fire on which he was being burnt alive): and I don’t mean that in any sort of patronising way – quite the opposite.

A man in bed, with a heavily bandaged leg, his small children and his wife pray to the Virgin and Child. Ex-voto in the exhibition, from the church of the Madonna del’Arco, Naples. (Credit: Il Museo degli ex voto del santuario di Madonna dell’Arco, Naples)

As the curators state in the accompanying catalogue, we tend to see the Italian Renaissance as an upsurge of humanism which shed a bright and cleansing light upon the murky practices and superstitions of the medieval Catholic church. But (like everything else in history) this is true only up to a point. In the ‘normal’ home as much as in the local church, religious belief and practice continued much as it always done, and indeed the Counter-Reformation of the later sixteenth century confirmed traditional practice in places (like Italy) which had been almost unaffected by the rise of Protestantism.

The ‘Holy Home’ is the focus of the exhibition, as it is of the other research arising from the ‘Domestic Devotions’ project (funded by the European Research Council), which involves staff of the Museum as well as members of the departments of art history, architecture, history and Italian in Cambridge, who have carried out prodigious amounts of research in museums, galleries, archives and churches in Italy. Their fascinating website gives prodigious amounts of information.

The exhibition focuses on three separate locations in Italy: Naples, a byword for baroque (and indeed Baroque) excesses of religiosity, Lonigo, a small town in the Veneto, and Tolentino in Le Marche, where St Nicholas (not St Nicholas of Bari, originally of Myra,  who transmogrified into Father Christmas, but an Augustinian monk (1246–1305) named after him) lived and worked, and performed miracles. 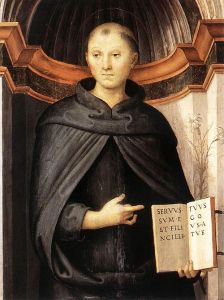 St Nicholas of Tolentino, an Augustinian friar, canonised in 1446, by Pietro Perugino (c.1446– 1523). Among his many miracles was putting out a fire in the Doge’s palace in Venice by appearing from the sky and throwing a piece of the Host on the flames. (Credit: Galleria Nazionale d’Arte Antica, Rome)

The word (words?) ‘ex-voto’ conjure up to me heavy, glass-fronted wooden cases on the walls of French and Italian churches, containing withered wreaths, half-burned candles and grotesque small models of body parts, usually in silver. (My most recent encounter was in the cathedral at Sorrento, dedicated to Sts Philip and James, which has a large collection in a frame.) 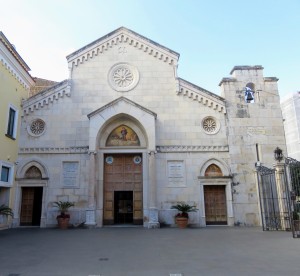 The duomo of Sorrento – it was too dark inside for photographs!

The ex-votos on display here are painted on slabs of wood, with an energy and urgency that makes up for any lack of sophistication or indeed perspective.

One of the most poignant is from Tolentino: it is a thank-offering from the Viadana family for their survival during an earthquake, and shows the family, calmly united in prayer in the upper storey of their house, while all around them buildings are cracking up and men are in despair. Their prayers are not in vain, because St Nicholas, from a cloud, gives his blessing to them and their intact home. Of course, the Marche region is tragically famous for earthquakes, the most recent of which occurred at the end of August last year. 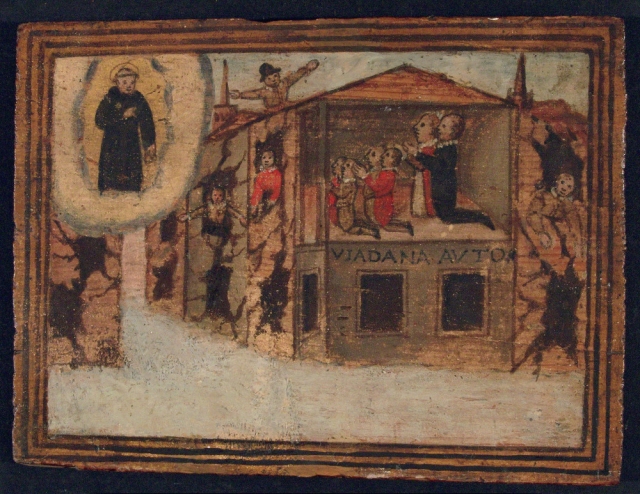 In fact, some of the arrangements already in train for borrowing artifacts from the area had to be abandoned, because of the damage and destruction caused by the earthquake. There is a wonderful juxtaposition on display of a painting in the Fitzwilliam’s own collection, the ‘Virgin Adoring the Child’ (c. 1460–5) by the so-called ‘Master of the Castello Nativity’ 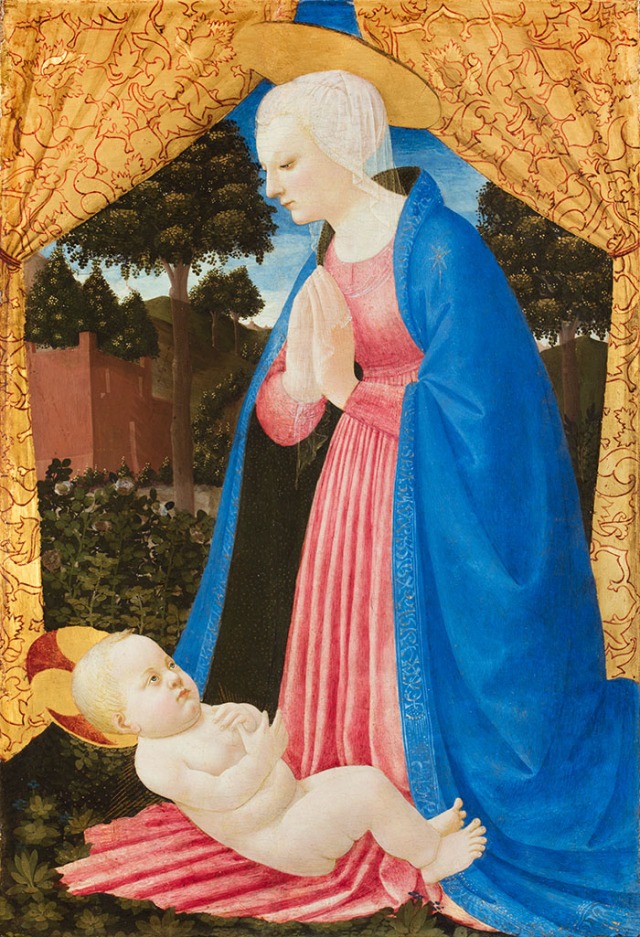 ‘Virgin adoring the Child’, by the Master of the Castello Nativity. (Credit: Fitzwilliam Museum)

and a wooden doll loved and venerated since the fifteenth century in the nunnery of Santa Chiara in Camerino. Part of the ceiling of the church came down, but the doll survived undamaged, and can now be seen (without his elaborate clothing) laid at the foot on the painting on a folded cloth which echoes the Virgin’s pink robe. 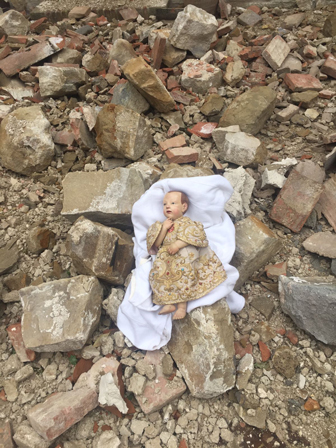 The baby, surrounded by earthquake damage.

Another fascinating feature of the exhibition is the demonstration of the expertise of the Museum’s paintings conservation department, the Hamilton Kerr Institute. I had the pleasure of a visit last year when many of the paintings now on display were undergoing the process of research, conservation and restoration. Here is the Pinturicchio ‘Virgin and Child with St John the Baptist’ before restoration (my photo): 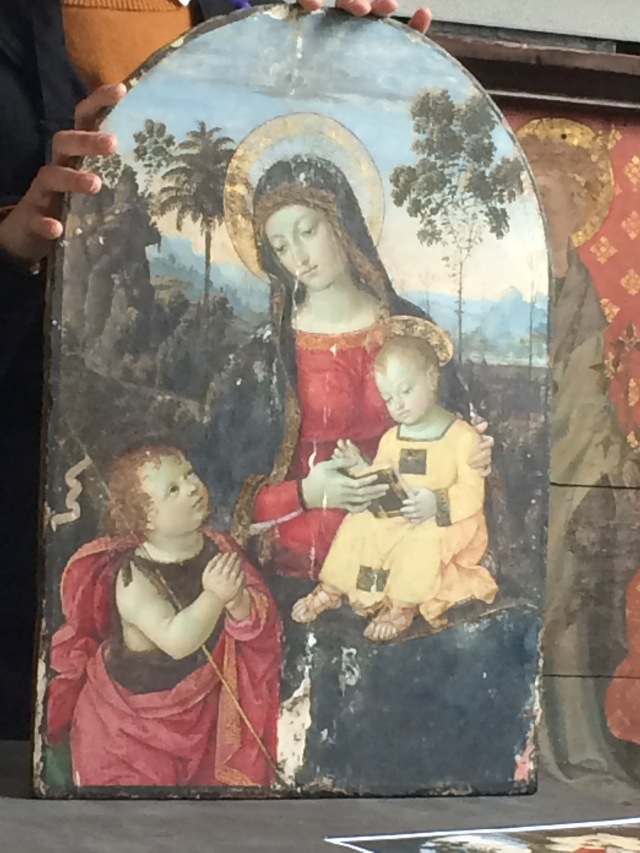 ‘Virgin and Child with the Infant St John the Baptist’, at the Hamilton Kerr Institute last year.

and the resplendent image now on the front of the catalogue. (The detail of the Christ Child’s sandals is quite wonderful.) 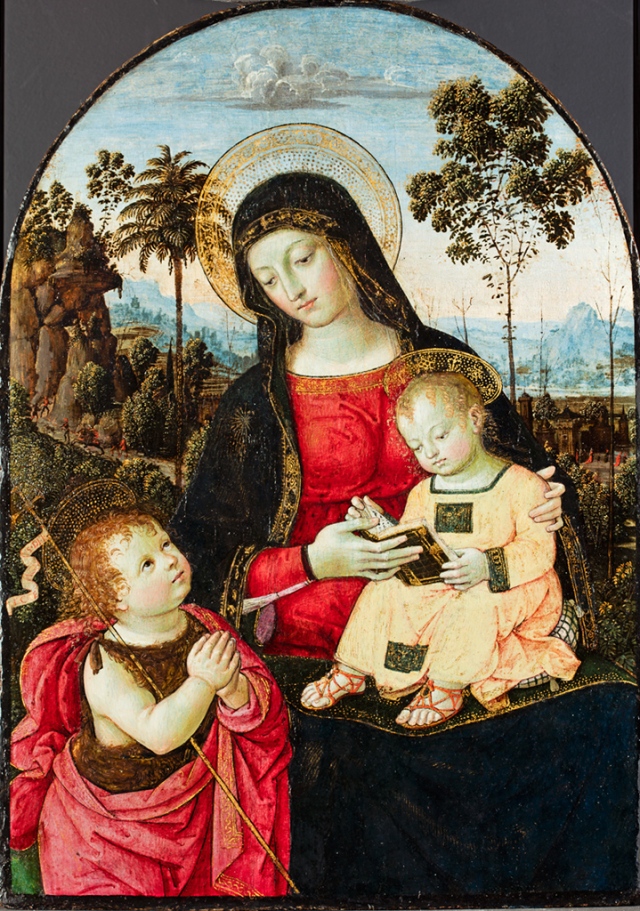 … and the picture after cleaning and restoration. (Credit: Fitzwilliam Museum)

Another revelation has been the cleaning of the icon-like ‘Virgin and Child’ attributed to Pietro di Niccolo da Orvieto, with its fascinating rear (or front?) panel. 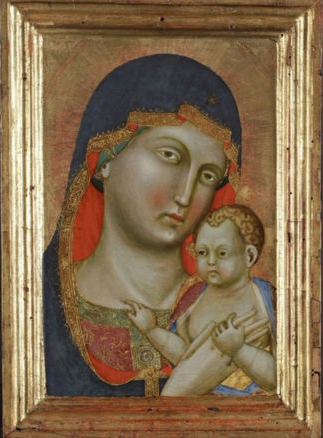 After cleaning, the Virgin’s robe is revealed to be blue, not black, painted using the pigment azurite. (Credit: Fitzwilliam Museum)

There are many other marvels, including the accoutrements of worship such as rosaries, candlesticks, special prayers for protection to be worn on the body, and souvenirs from pilgrimage sites – a fascinating nugget of information from a talk by Marina Warner was that scrapings of bricks and mortar from the Holy House of Loreto were incorporated into clay which was then used to create ceramics for the devout to take home. 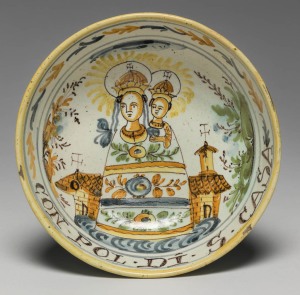 Maiolica bowl with the Virgin and Child outside the Holy House of Loreto. It comes with a certificate of authenticity: the inscription round the rim: `CON.POL.DI.S.CASA’ (‘with dust of the Holy House’). (Credit: Fitzwilliam Museum)

My own favourite piece is borrowed from the Ashmolean Museum in Oxford: a three-dimensional, seventeenth-century jigsaw puzzle which enables you to create your very own Church of the Holy Sepulchre in Jerusalem. 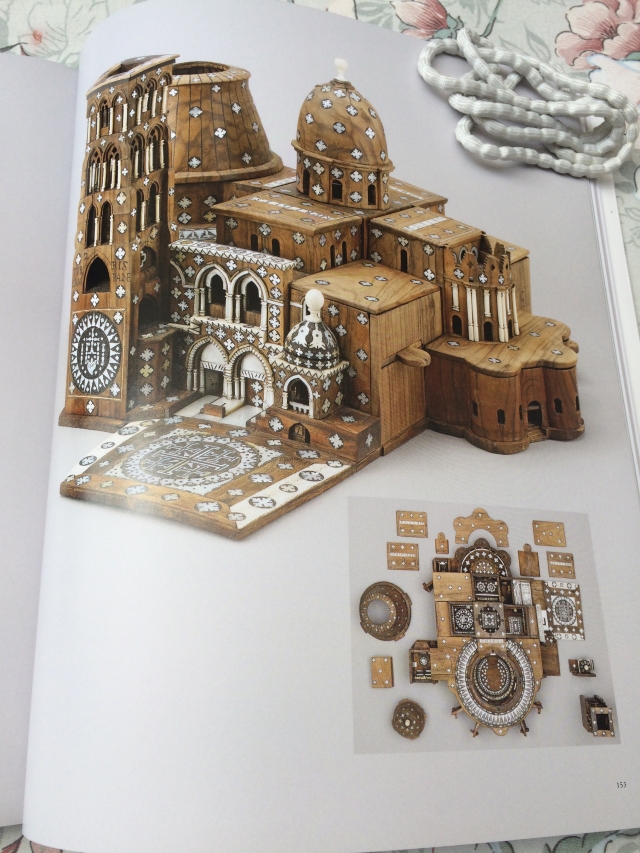 The model church from the Ashmolean Museum, Oxford, made from olive wood inlaid with mother-of-pearl, photographed in pieces and complete, from the exhibition catalogue.

But there are also devotional dinner knives with the words and music of a grace and benediction for four voices on either side of the blades, for use before and after the meal, and maiolica bowls, plaques and models. I mustn’t forget to mention the intriguing section devoted to Jewish domestic observance, or the paintings and prints, the books of hours, St Ursula‘s bedchamber … but I do hope that you will go and see for yourself!

4 Responses to Madonnas and Miracles