Father of the More Famous

I’m currently reading a book about Sir Joseph Banks as an Enlightenment figure (yes, I probably should get out more), and was struck by this quotation: ‘Mann [the Abbé Mann (1735–1809), a Yorkshire Catholic convert and savant who became a soldier, then a monk, then a secular scientist] closed his letter by congratulating Banks on “the inestimable blessing of being in a free country”.’

At a time when (a) we seem to think of the late eighteenth century only as a time when Britain exploited both its indigenous labouring poor and its colonial slaves, as well as employing a system of state espionage against its own liberals and radicals; and (b) uncharitable and sometimes disgraceful arguments are being proffered in favour of reducing both our intake of and the rights of refugees, it is slightly cheering to think that there have been periods when Britain was seen as a haven of the oppressed long before the Statue of Liberty got to lift her lamp beside the golden door.

Mann was writing in 1790 from the Austrian Netherlands, where, by his account, the government ‘having only arbitrary power in view, declared itself openly against the Sciences for several years past’; but the view of Britain as a refuge for victims of ‘arbitrary power’ stems at least from Voltaire’s Letters on the English of 1733 (it was published in French in Basel in 1734 and almost immediately suppressed in France), and has not quite vanished yet.

One group I have been intrigued by is the community of Italian exiles from the 1820s onwards – victims of repression either by the Austrians in the north or by the Spanish Bourbons in the south. One such was Gabriele Pasquale Giuseppe Rossetti (1783–1854), born in Vasto in the Abruzzi, then part of the kingdom of the Two Sicilies, and thus ruled over by the less than delightful Ferdinand I (also III and IV), who revoked his enforced sign-up to a constitutional monarchy in 1821.

Gabriele, the son of a blacksmith, had spent just over a year studying, under the patronage of the local marchese, at the university of Naples in 1804. He published a volume of poems (which he would later deprecate) in 1807, and as a result was given a post at the San Carlo opera house as writer of libretti; bizarrely (by modern standards) he then moved to become the curator of ancient marbles and bronzes in the Naples Museum – a post which he retained after the fall of Bonaparte and hence of his appointed king of Naples, Joachim Murat, and the restoration of Ferdinand. 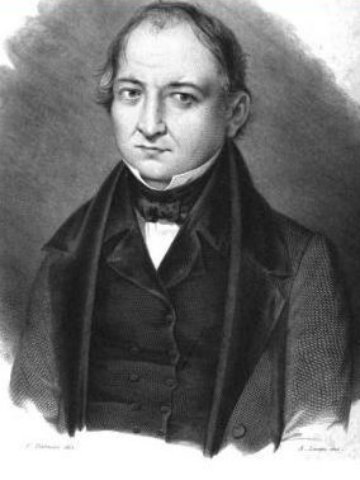 Gabriele Rossetti as a young man.

However, as a member of the General Assembly of the supposedly secret society of the Carbonari (who sought a united and liberally governed Italy), proscribed by Ferdinand, he went into hiding in the city for three months before being rescued by Admiral Sir Graham Moore of the Royal Navy (brother of the more famous Sir John Moore of Corunna), whose wife persuaded him to provide the political dissident with a British uniform. Collected by carriage, he was taken to the harbour, whisked on to a ship and taken to Malta. His son William Michael Rossetti notes that although Ferdinand issued a declaration in September 1822 offering an amnesty to members of the constitutional movement, thirteen men were expressly excluded: ‘My father is the thirteenth.’ 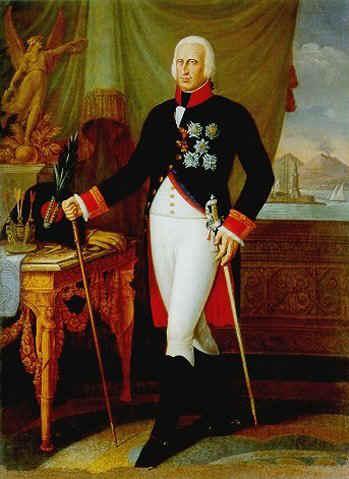 Ferdinand I, by an unknown artist, with Vesuvius smouldering in the background.

In Malta, Gabriele was befriended by John Hookham Frere (1769–1846), whose friendship since Eton with George Canning will not have harmed his diplomatic career (though occasionally the behaviour of his mistress and later wife, the countess of Erroll, did). Frere’s career went somewhat into eclipse after he (badly) advised Sir John Moore to retreat to Corunna rather than through Portugal, and he was replaced as minister-plenipotentiary in Spain by Wellington (as he later became). In Malta for his wife’s health, he had taken up writing, and translated Aristophanes and Theognis.

Gabriele’s reputation as an anti-Bourbon and his skill as a poet and ‘improvisatore’ made him welcome in Maltese society, but he was so ‘harassed by the spies or other emissaries of the Bourbon Government, that he resolved to have done with Malta, and settle in England’ in early 1824. In 1826, he married Frances Mary Lavinia Polidori – daughter of another Italian émigré, Gaetano Polidori (1764–1853), a writer, printer and one-time secretary to the dramatist Vittorio Alfieri – and his English wife, thus becoming brother-in-law to the unfortunate physician John Polidori, Lord Byron’s doctor and author of The Vampyre. Four remarkable children then followed. 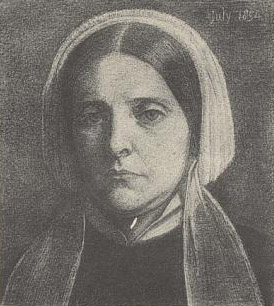 Frances Rossetti, drawn three months after her husband’s death by her son Dante.

He made his living as a teacher of Italian (like Lorenzo da Ponte before him and Daniele Manin after him), and was in 1831 appointed professor of Italian at the recently founded King’s College, London. W.M. Rossetti is anxious to assure us that the post ‘was not a sinecure; but the students were few, and became fewer from about 1840 onwards, when the German language began decidedly to supersede the Italian in public favour’.

His son draws an endearing picture of their happy but relatively poor family life (as her husband’s health, and particularly his eyesight, began to fail, Frances too began to teach languages to increase their income), and it is thought that Professor Pesca, the exiled Italian teacher in Wilkie Collins’s The Woman in White, was drawn from Gabriele’s character as well as his circumstances. Gabriele’s household remained the ‘resort of all classes of Italians passing through or residents in town. Musicians and literary men met there with revolutionaries fresh from the wasting struggle for Italian liberty. A romantic odour of assassination hung round one at least of the regular habitués of the house, and added spice to the somewhat fusty atmosphere of the father’s own particular studies.’

This description comes not from William Michael, but from an 1899 work by Henry Currie Marillier, an engineer who in 1897 had bought Morris’s Kelmscott House, and later became managing director of Morris and Co., turning himself into an expert on textiles and the repair of tapestries (and the Morris factory into a manufacturer of aeroplane propellors during the First World War). Marillier’s account, which was the authority on the chronology of Dante Gabriel Rossetti’s work for most of the twentieth century, could clearly afford to be slightly more racy than Gabriele’s son’s, but is it more accurate?

Sadly, Gabriele’s own verse autobiography (translated into English verse by William) shows that he was at odds with one famous Italian emigré, Sir Anthony Panizzi, another political refugee, who rose to be the principal librarian of the British Museum (and arguably its greatest director). The poet Ugo Foscolo advised the newly arrived Panizzi in 1823 to try making a living as an Italian teacher in Liverpool (as London was a bit over-subscribed with exiles), and gave him an introduction to William Roscoe, banker, biographer of Lorenzo de’ Medici, botanist and devoted friend of Sir J.E. Smith.

Panizzi and Rossetti later both applied for the post of professor of Italian at the University of London (later University College) and Panizzi won, probably because he had Henry Brougham as patron. He had exactly the same problem as Rossetti at King’s – not enough pupils. But Brougham felt bad about his protégé, and in 1831, as Lord Chancellor, supported his application for a post as extra assistant librarian in the department of printed books at the Museum: the rest is bibliography. One would have thought that this similarity of background would have made them friends, but it appears that, (apart from the rivalry over the professorial post), Panizzi was rude in print about Rossetti’s theories about Dante, and was never forgiven.

Gabriele Rossetti died on 26 April 1854 and was buried in Highgate cemetery. After Italian unification, a movement was begun to transfer his remains to Santa Croce in Florence, where they would rest alongside his literary hero and fellow exile, Dante, but his wife refused. William Michael observes: ‘In Vasto … the principal Piazza …and Communal Theatre are named after him; and it has long been proposed – though perhaps rather half-heartedly – to erect his statue …’. This eventually happened in 1925, and here it is. 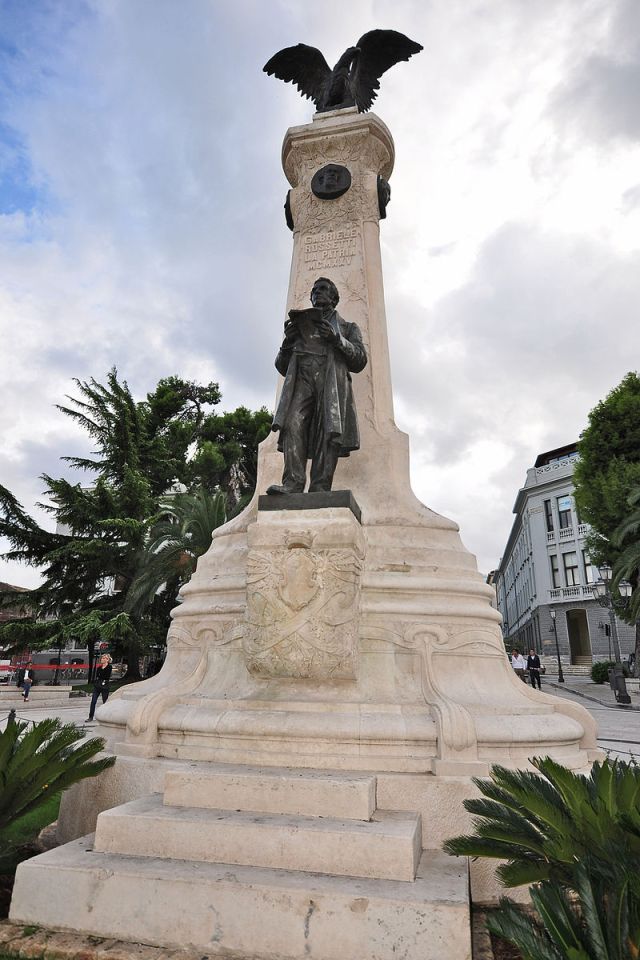 One wonders if the exiled liberal would have been too thrilled at the regime which eventually bestowed the honour?