4 September 1666 is generally reckoned to have been the most destructive day of the Great Fire of London, during which large amounts of the city on the north bank of the Thames were razed to the ground. The lost buildings included many churches, and it was the determination to replace many of these on their original sites which – as well as insoluble wranglings about land ownership and rights of way – caused the reconstruction of the area to end up being dov’ era, if not quite com’ era.

Famously, after his masterplan to transform London out of a medieval rabbit warren into a modern Palladian city dotted with piazze was scuppered by ‘faction’, Christopher Wren nonetheless designed many of the replacement churches. One of these was St Antholin’s (or St Antlins, or St Antling’s, or St Tantlin’s), Budge Row, which stood, according to Henry Wheatley, ‘at the south-west corner of Sise Lane, Watling Street, in Cordwainer Street Ward’.

the City of London before and after the fire, with Wren’s proposed plan for reconstruction.

This needs a bit of unpicking: going back to John Stow, Cordwainer (or Shoemaker) Street ‘beginneth in the East on the west side of Walbrooke, and runneth west through Budge Row (a street so called of Budge [i.e. lambs’] Furre, and of Skinners dwelling there), then vp by S. Anthonies Church through Aetheling (or Noble street) as Leyland termeth it, commonly called Wathling streete … on the north side of the high street in Budge row, by the East end of S. Anthonies church, haue ye S. Sithes lane [cf. ‘Sise Lane’, above], so called of S. Sithes Church … and this is wholy of Cordwainers streete ward: also the south side of Needlers lane, which reacheth from the north end of Saint Sithes lane, west to Sopers lane, then west from saint Anthonies Church is the south ende of Sopars lane’. There is then a useful digression about the making of soap in London; but I paused to look up ‘S. Sithes’, and was staggered to discover that she is St Zita, whose corpse I viewed in Lucca earlier this year … Stow also describes some of the burials in the church (including that of Chaucer’s father) and transcribes some of the (touchingly bathetic) epitaphs. (For more on Budge Row, see the doyen of London bloggers, The Gentle Author.)

According to Richard Newcourt’s Repertorium Ecclesiasticum Parochiale Londinense (1708), the St Anthony to whom the church is dedicated is not the saint of Padua but the much earlier St Anthony Abbot, hermit of Egypt: ‘From him are derived the Eremites of the order of S. Antony, who live only with Bread, Wine, and Salt … It is said, That God gave a Privilege to S. Antony, or a Preservative against Fire; not only against the Disease call’d S. Antony’s Fire [the term is used for both ergotism and erisypelas]; but also from the Fire of Hell. The Monks of the Order of S. Antony use a black Habit, with the Letter T of a blue Colour on the fore part of their Breast, in imitation of S. Antony, as they brag.’

Moreover: ‘These Monks with their importunate begging (contrary to the Example of S. Antony) are so troublesome, as, if Men give them nothing, they will presently threaten them with S. Antony’s-Fire. So that many simple People, out of Fear and blind Zeal, every Year use to bestow on them a fat Pig or Porker (which they have ordinarily Painted on their Pictures of S. Anthony) whereby they may procure their good Will and their Prayers, and be secure from their Menaces.’ (For good measure, Newcourt also mentions ‘an Holy Martyr’ of France called Antholianus, but he is certain that the church is dedicated to the hermit.)

The rectory was in the gift of the Dean and Chapter of St Paul’s. It existed at the time when the historian Ralph de Diceto was dean, but its earlier history is obscure. Newcourt records its various benefactors, including Richard II, wealthy members of guilds, and Henry VII’s physician, who gave the church ‘two Chains of Gold, weighing 14 Ounces and a Quarter, for to make a certain Ornament to put on the Blessed Body of our Saviour Jesus’. After the Reformation, a routine of a morning prayer and lecture (for which the bells rang at 5 a.m.) was instituted – it became a recourse for the devout, and for a brief period, of the fashionable.

But, alas, as Newcourt describes: ‘This Church suffered the common Fate with other Churches, in the late general Conflagration of this City, in 1666 [the parish records, available online, show no births, marriages or deaths between 30 August 1666 and 4 January 1668], but is now new built (having a Tower with a very curious Spire on it all of Free-Stone)’. Wheatley describes the church in slightly greater detail: ‘The interior was ingeniously fitted to an irregular site and covered with an oval-shaped dome, supported on eight Roman Corinthian columns. The church was taken down in September 1874 to make way for Queen Victoria Street …’. The Wren tower, however, had been ‘injured by lightning many years before; taken down, and replaced by a new and somewhat lower spire. The injured spire was taken away to ornament the garden of one of the parish authorities at Forest Hill’.

The authority in question was Robert Harrild (1780–1853), printer, inventor and philanthropist, whose work was displayed at the Great Exhibition in 1851. (His most effective invention was probably the roller for applying ink to type; up until his time, the fifteenth-century technology of the pair of ink-soaked leather ‘mushrooms’ was still in use.)

A 1568 print: the man on the right is inking two pages of type before sliding them under the press.

Harrild paid £5 for the spire in 1829, and, extraordinarily, it still survives, in what was his garden and is now an open space between some 1960s houses in Sydenham.

I haven’t been able to find an image of the medieval church: this is Wren’s building from London and its Environs in the Nineteenth Century: Illustrated by a Series of Views from Original Drawings, produced by James Elmes using works by Thomas H. Shepherd (1792–1864), and published in 1827, just before the loss of the spire.

Another view is provided in volume 1 of Walter Thornbury’s Old and New London (a work published in fascicles in the 1880s), after the removal of the original spire.

The view in Thornbury’s work, with the replacement spire, published after the church was demolished, but presumably drawn previously.

The sale of the site of the demolished church raised enough money to build a new St Antholin’s in Nunhead, Southwark, in 1877: this was destroyed by bombing in 1940, and replaced by a brick building in 1957. When this in turn was declared redundant in 2001, the 1717 bell from the original St Antholin’s was re-hung in the new parish church, dedicated to Sts Antony and Silas. 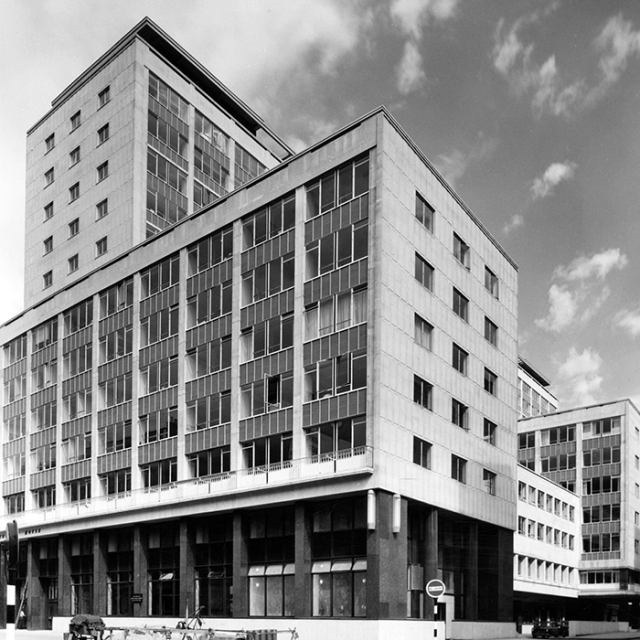 Meanwhile, back on the ‘new’ Queen Victoria Street, also severely damaged by bombing, the site of St Antholin’s was absorbed in the 1950s into the Modernist skyscraper of Bucklersbury House, during the building of which the Roman temple of Mithras was discovered, dug up, moved a bit and displayed on a concrete platform surrounded by more concrete. 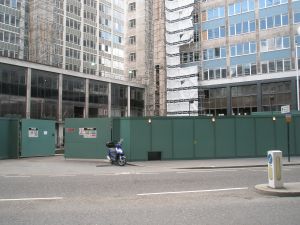 Bucklersbury House in the process of demolition.

The deluge of time having in due course swept over this development and left an extremely large hole, London now awaits the unveiling of Walbrook Square, which will apparently contain a much nicer version of the Mithraeum, in October 2017.

You may wonder how I stumbled across St Antholin’s. Well, if any lingering doubt of the truth of the adage ‘Everything is connected to everything else’ still exists, even after the remarkable appearance of St Zita in the City of London, the reason is that I was trying to find out what happened to Harriet Blosset. She was the ward of James Lee (1715–95), of Lee and Kennedy, proprietors of the Vineyard Nursery in Hammersmith, and belonged to an Irish family of Huguenot origins. When Joseph Banks left on the Endeavour in 1768, an informal engagement apparently existed between the two; when he returned, he broke it off (and apparently paid £500 to soften the blow). 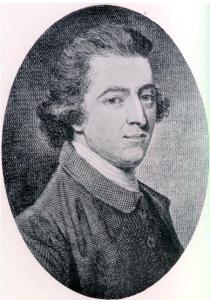 And on 17 November 1775, Miss Julia Henrietta Blosset, known to her friends as Harriet, married at St Antholin’s, Watling Street, the Rev. Henry Jerome de Salis (1740–1810), Chaplain in Ordinary to George III, rector of the parish, vicar of Wing (Buckinghamshire), D.D., F.R.S., F.S.A. (and therefore inevitably an acquaintance of Banks). His aristocratic Swiss antecedents are, however, another story …