Object of the Month: September 2017

Now that I spend part of my time in a museum (tough gig, but somebody has to do it), I am getting quite good at pausing mid-stride and staring without actually falling over or causing anyone else to fall over. If I try this in the street, the results are usually not so good, and of course I am completely intolerant if anyone else does it to me  – ‘Come on, Tourist, are you telling me you’ve never seen King’s College Chapel before?’ (Though in fact this happens less and less often, because the Tourists are all reading about King’s College Chapel on their phones, or taking selfies, not breaking stride in awe and wonder at the sight before them.)

The point is that (as I’ve said before), I think I know more or less what is where in which gallery – one does tend to notice if a Titian and a Veronese swap walls – but it’s more difficult with the smaller objects in the vitrines. I pass through the Korean gallery at the Fitzwilliam Museum several times a week (not least because it is on my direct route to the coffee in the café) but I had never consciously noticed this before: 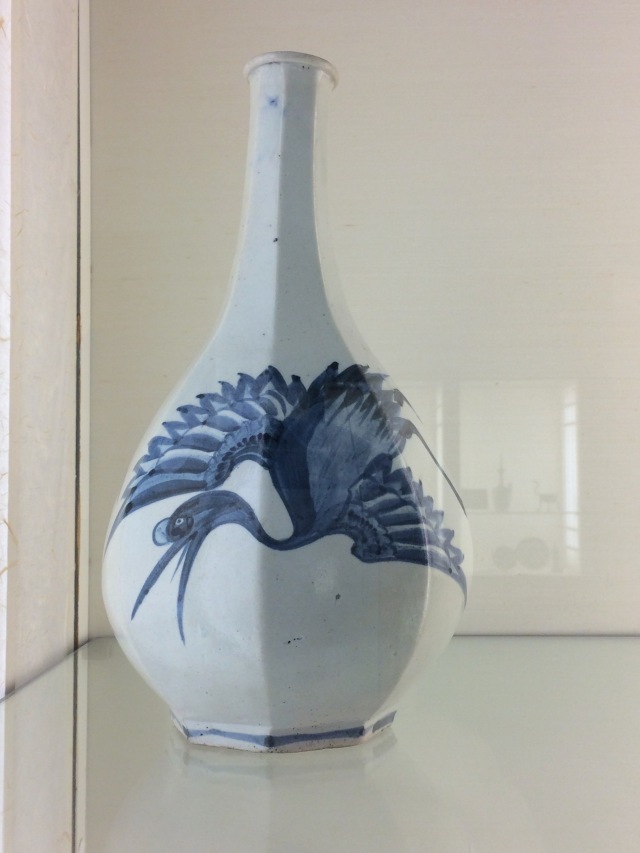 A Korean octagonal porcelain bottle, depicting a crane (symbol of long life), c. 1850-1900, given to the Fitzwilliam Museum by W.M. Tapp.

And having paused in mid-stride to look at the way the crane has been painted, taking into account not only the curve, but also the faceting of the bottle, I looked at the other items in the case (many of which also depict cranes) and their labels. 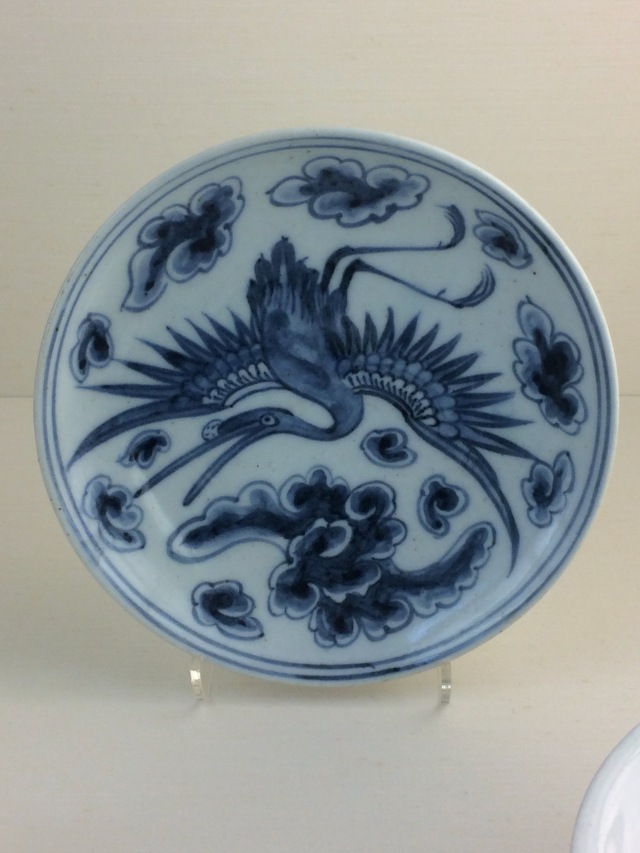 Nineteenth-century dish showing a crane among clouds, from the Gompertz Gift (1984).

At which point, it occurred to me that I know nothing at all about Korea earlier than the second half of the twentieth century, and not much about that. At a period when we have two individuals with fingers on nuclear buttons who have in common the petulance of a three-year-old child who’s just been told he can’t have another ice-cream, finding out more about Korean civilisation can’t do any harm, though it’s unlikely to make a lot of difference. 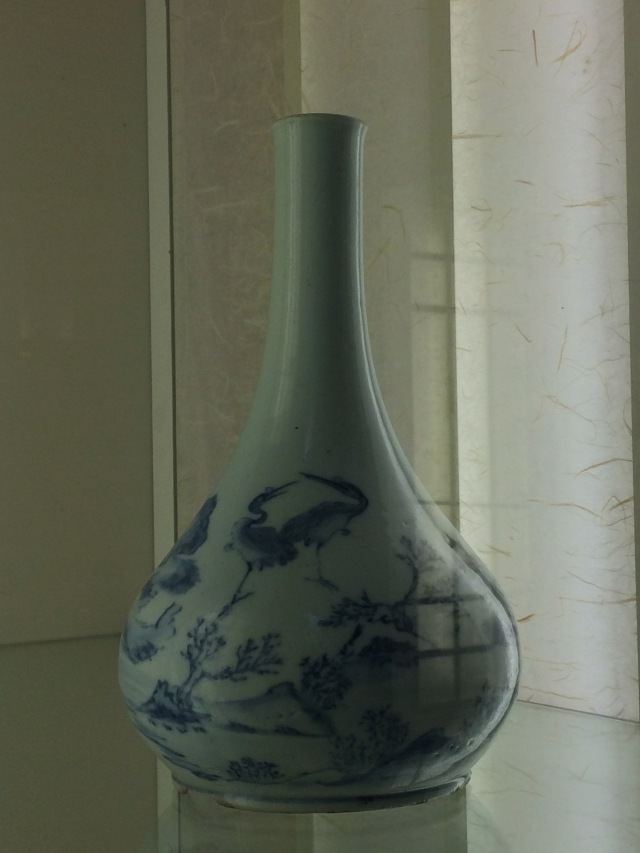 Nineteenth-century Korean bottle showing cranes in a landscape, given by W.M. Tapp.

Needless to say, like the history of any country, it’s complicated – and not only because the precise dates attached to foundation myths (2333 BCE and the twelfth century BCE) are not supported by either archaeological or documentary evidence. The Korean peninsula has throughout its human history been blessed and cursed by its proximity to those two titanic empires, China and Japan, and artistic and cultural cross-influences are evident even to the most ignorant eye (i.e. me). What is perhaps surprising is how long it took for Europeans to take any notice of it.

Marco Polo knew Korea as ‘Cauli’ (though it seems unlikely that he ever went there). The first uses of the word ‘Corean’ in English, according to the OED, is in Richard Cocks’s diary recording his time as head of the East Indian Company’s trading post in Japan, from 1615 to 1622. (And again, Cocks was concerned with Korea from the outside – especially with difficulties in trade – and the only Koreans he encountered were in Japan.) Another mention, from 1727, is in the English translation of Engelbert Kaempfer’s history of Japan. However, Korea’s influence on Europe may be much older and greatly more significant than these minor citations may suggest, if it is true that news of moveable metal type, invented there in the 1230s, and later adopted and taken westwards by the Mongols, had reached the ear of Gutenberg and his early rivals … Chinese visitors were apparently surprised by the high levels of literacy in Korea, and the shame attached to the inability to read.

But as late as the nineteenth century, when Japan was taking a much greater interest in the West and China was no longer the inward-looking society which it had long been thought to be (though I’m reading a book at the moment which argues against this Eurocentric view of history), Korea was visited by relatively few Europeans, and was still designated ‘the Hermit Kingdom’. In 1816 the naval commander and scientist Basil Hall visited the west coast of Korea and the island of Okinawa while Lord Amherst’s not totally successful diplomatic mission to China was taking place: he published an account in 1818 which included ‘Unsociable character of the natives – Interview with the Coreans – Peculiarities of their character – Language’ among naval charts and soundings and meteorological and geological information.

William Munro Tapp (1859–1936), who was admitted at Gonville and Caius College, Cambridge, in 1877, and who bequeathed the vase (and many others) to the Fitzwilliam Museum, had perhaps read some other nineteenth-century accounts – one of which, by American author and educator William Elliot Griffis is actually called Corea, the Hermit Nation (1882). Another work, published in 1895, and very popular in Britain, was Corea or Cho-sen: The Land of the Morning Calm, by A. Henry Savage Landor (1867–1925) grandson of the more famous Walter, and author of the melodramatic-sounding Alone with the Hairy Ainu: Or, 3800 Miles on a Pack Saddle in Yezo and a Cruise to the Kurile Islands (1893), an investigation of indigenous people of the Kurile islands and Sakhalin.

Tapp was a solicitor by profession, but clearly had time for a wide range of interests: he was a fellow of the Royal Society of Antiquaries and of the Royal Geographical Society, and a member of the Archaeological Societies of Essex, Suffolk and Somerset. He travelled in Korea about 1912–13, and presumably bought his vases then: he donated one to the Victoria and Albert Museum in 1919. (Interestingly, he worked as an ambulance driver for the St John’s Ambulance Brigade during the First World War – though it’s not clear if he was based at the huge hospital at Étaples in France or in the U.K.) 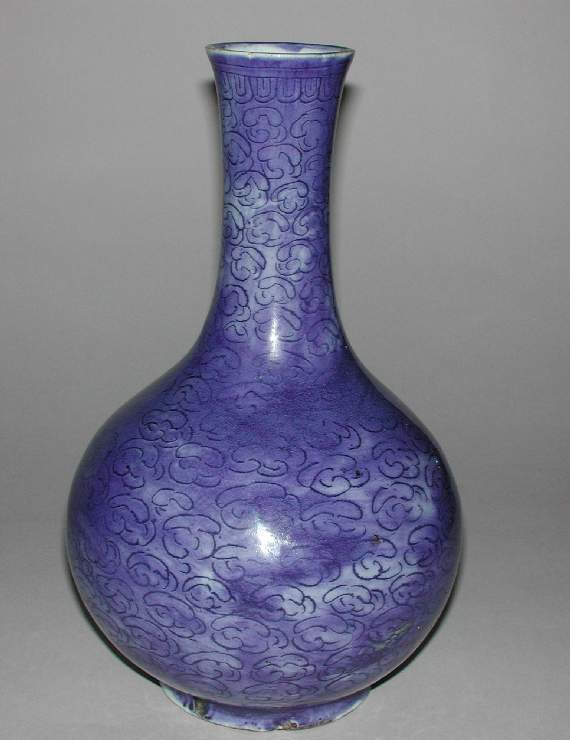 Tapp was a great benefactor to his own college, bequeathing it £200,000, of which half was to be used for the study of law. (Two Tapp Scholarships of £4,000 per annum are awarded to undergraduates, and W.M. Tapp Studentships to postgraduates.) He donated or bequeathed over 40 Korean items, some old, others (including the crane vase) almost contemporary, from his collection of ceramics to the Museum,  as well as specimens of English, Japanese and Chinese pottery. 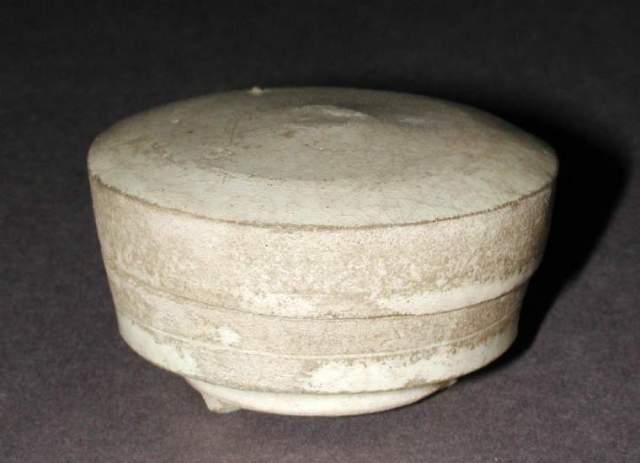 A stoneware dish and lid from the Koryo dynasty (918–1392), donated by Tapp. (Credit: the Fitzwilliam Museum) 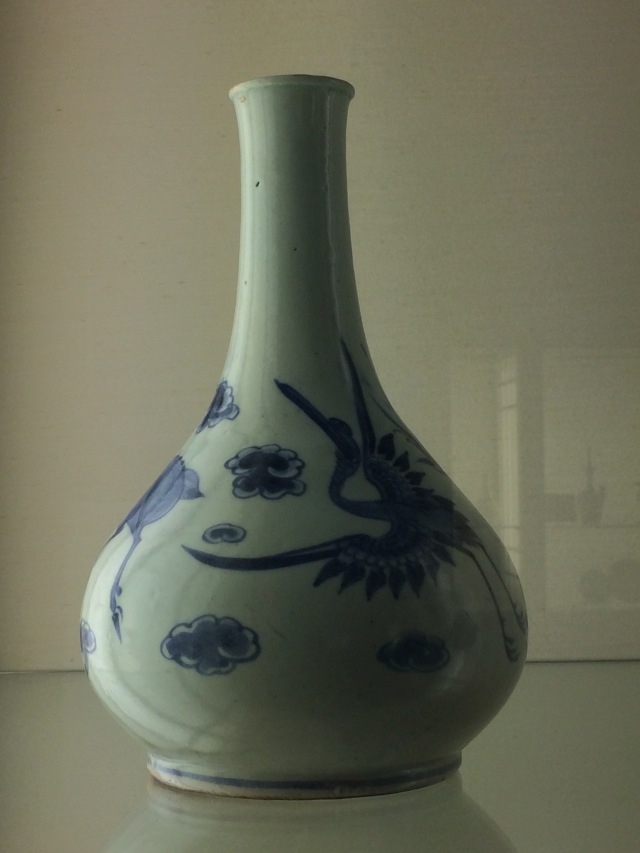 A bottle with crane and deer from the nineteenth century, also donated by Tapp.

The Fitzwilliam Museum has one of the best collections of Korean pottery outside the Far East: this is largely owing to the gift of Godfrey Gompertz, after whom the Korean gallery is named, but Tapp’s donations, made at a time when Korean art was barely know in the West, undoubtedly formed a remarkable nucleus on which the Museum would subsequently build.

4 Responses to Object of the Month: September 2017