Or are they prejudices? Did I not warm to Bologna because of the oppressive feel of the red stone buildings and the gloomy arcades, or because I don’t much like the paintings of the Bolognese school, or because I lost a filling at the Ristorante da Ercole, and endured a terrible night with the jagged tooth rubbing against my tongue before I found a dentist who charmingly and efficiently put in a temporary dressing?

Pisa (and Padua, and Ferrara) are all fascinating places of great beauty, but I am not drawn back to them as I am to Mantua, or Lucca, or (of course) Venice. Ferrara has the same dark red problem (only in brick) – and whoever heard of a botanic garden that closes on Saturdays? Meanwhile, Pisa is full of people (and of course Venice is not, I hear you cry), and of decayed buildings (ditto!). So what appeals to my psyche more in some places than others, when the virtues – gardens, museums, reduced traffic noise – are on the face of it equal?

It was actually quite a sunny day …

In Lucca, this time, I performed a Personal Best – two campanili surmounted in one afternoon (and that after conquering the Leaning Tower of Pisa the previous day). These feats were against the odds – the duomo di San Martino was straightforward, until, about three flights from the top, the comforting stone steps changed to open-mesh metal through which one could see ALL the way down (the tower is hollow, with no intervening floors). 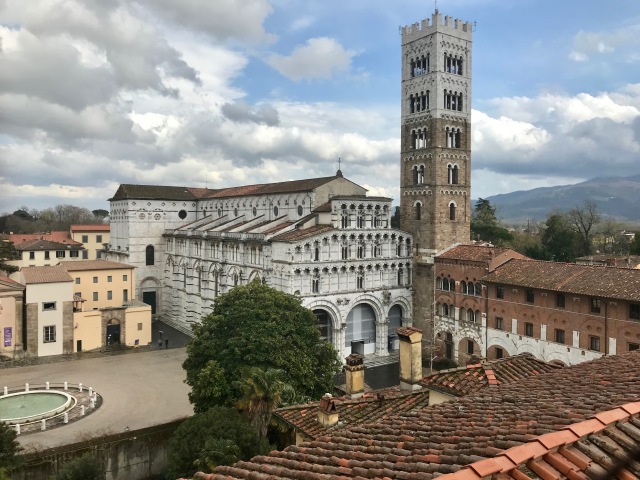 I made it up by looking fixedly ahead and feeling my way, with Him Indoors making encouraging noises from above, but going down was much worse, as (after a few near-missed footfalls recently) I feel compelled to look down at my feet when I an descending … Next, we tackled the tower of SS. Giovanni and Reparata – the catch here being that the last flight was an almost vertical ladder. 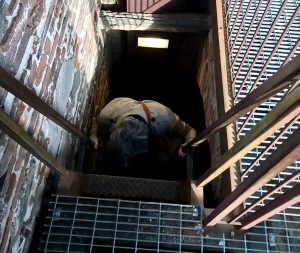 Why do you do it, various friends may ask, knowing that you are scared of heights and have a ludicrously bad sense of balance? The answer in both cases is that when I started off I didn’t know how it was going to end, there being no nonsense in Italy about health and safety, number of steps, hazard warnings … (Also, at the rate I am seizing up, if I don’t do it now, I certainly won’t be able to in a couple of years’ time.)

Happily, other experiences were more earth-bound in every sense. The Orto Botanico di Pisa claims to be the oldest in Europe, though only up to a point: it was established by Cosimo dei Medici in 1544, but between then and 1591 it was moved twice, leaving Padua (founded in 1545 – anything the Medici can do the Most Serene Republic of Venice can do better) to claim precedence because the garden remains on its original site.

The Botanic Garden is very close to the most famous sight in Pisa.

The first curator of the Pisa garden was Luca Ghini (1490–1556), born at Casalfiumanese near Bologna, where he studied medicine, lectured on medicinal plants and eventually became a professor. He is sometimes credited as the inventor of the herbarium, drying plant specimens and gluing them to cardboard to use as teaching aids. Ghini is perhaps less known than he deserved, largely because he didn’t publish much, though he shared his knowledge widely among colleagues and students. As far as I can find out, there is no genus of plants named after him, which demonstrates how much he had fallen out of repute by the time of the taxonomic explosion of the mid eighteenth century.

The garden at Pisa has a small botanical museum, housed in the original Botanical Institute of 1591–5, of which the façade is decorated rather charmingly with sea-shells.

The Botanic Museum at Pisa.

It contains portraits of Ghini and of several other botanists associated with the garden, including Andrea Cesalpino (1524–1603), Ghini’s successor; Pietro Andrea Mattioli, whose name (with an intrusive ‘h’) Robert Brown immortalised in the genus Matthiola (stocks); and Francesco Calzolari (1522–1609), an apothecary from Verona who made a hortus siccus of the plants growing on Monte Baldo, and an apparently very efficacious recipe for theriaca. Linnaeus later honoured his name by using it for one of the most unattractive – in my opinion – plant genera on the planet, the Calceolaria. 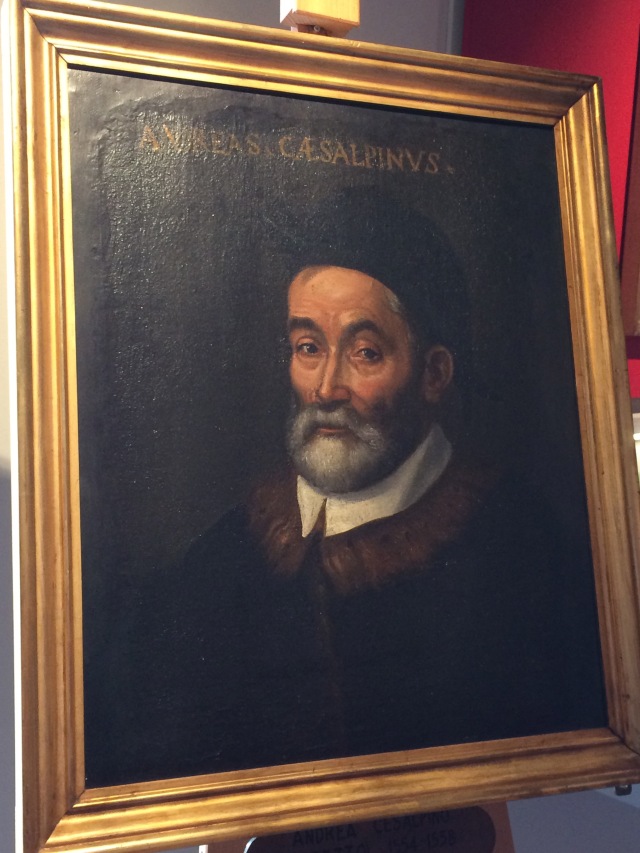 Francesco Calzolari, with his book on Monte Baldo.

Out in the garden itself, they have some terrific trees, including two specimens of Cinnamomum camphora, the camphor tree, which I had never seen before. It is a native of the Far East, and there is at least one specimen in Japan of which the age is estimated at over 1,000 years. 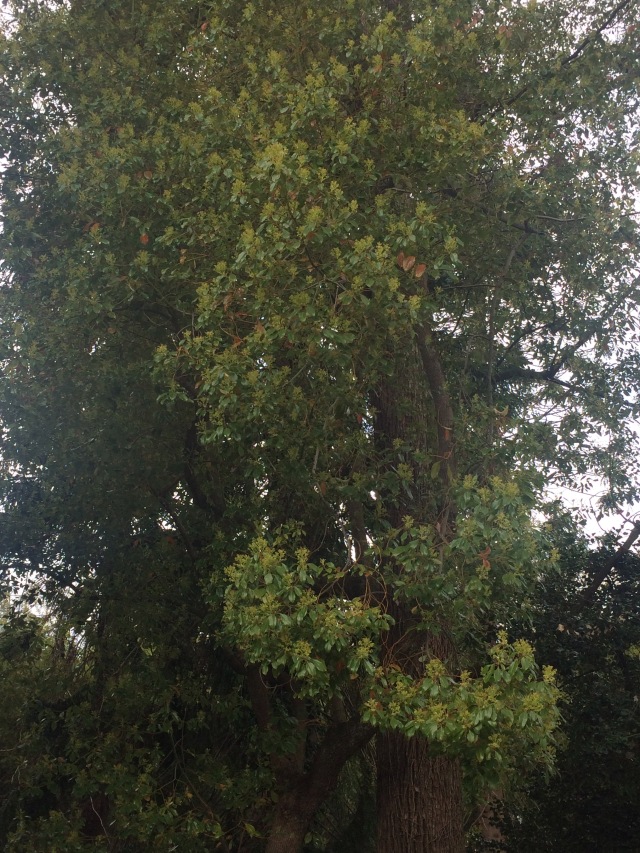 The camphor tree (above) and its flowers (below).

Another tree – which I had never heard of, never mind never seen – is Celtis australis, a Mediterranean native, variously called in English (allegedly) the honeyberry tree, hackberry, lote tree or nettle tree. It is claimed to be the ‘lotos’ of the Odyssey (and later of Tennyson), browsing upon which causes indolence and apathy. Sadly, this is not the time of year to give it a try – and some might say I need no physical stimulus to indolence and apathy anyway … 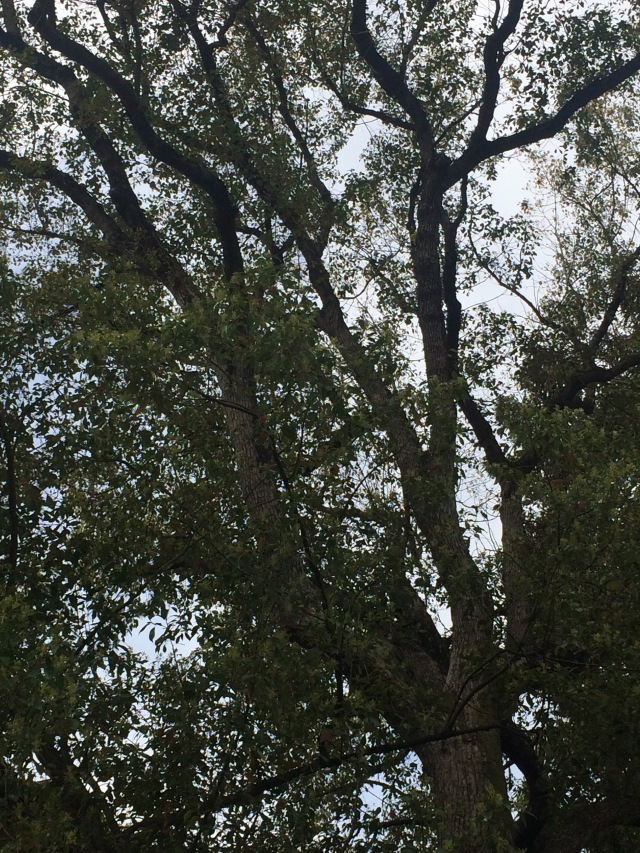 Celtis australis in a nineteenth-century flora.

I’ve already written about the two charming gardens in Lucca, the Orto Botanico and the garden of Palazzo Pfanner. We were in Lucca almost a month earlier than on our last visit (and spring is much later this year too), but there was still plenty to enjoy, especially the camellias.

Camellia in the Pfanner gardens.

The citrus trees, fruiting spectacularly in their pots, were still inside their winter orangery, but the lifting/transporting barrow looked good to go. I’d love to see the unleashing of the trees in action – it must be like letting sheep and their new-born lambs out into a field for the first time, though I don’t suppose the pots bounce up and down in the air.

Sadly, the Devil has entered the Pfanner Paradise, in the form of ground elder, taking over a bed of hydrangeas. 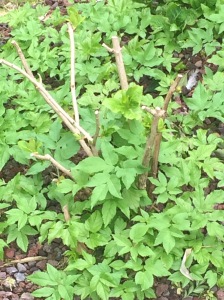 In the Botanic Garden, the rather more benign turtles were out sunning themselves in the warmth around the pond, 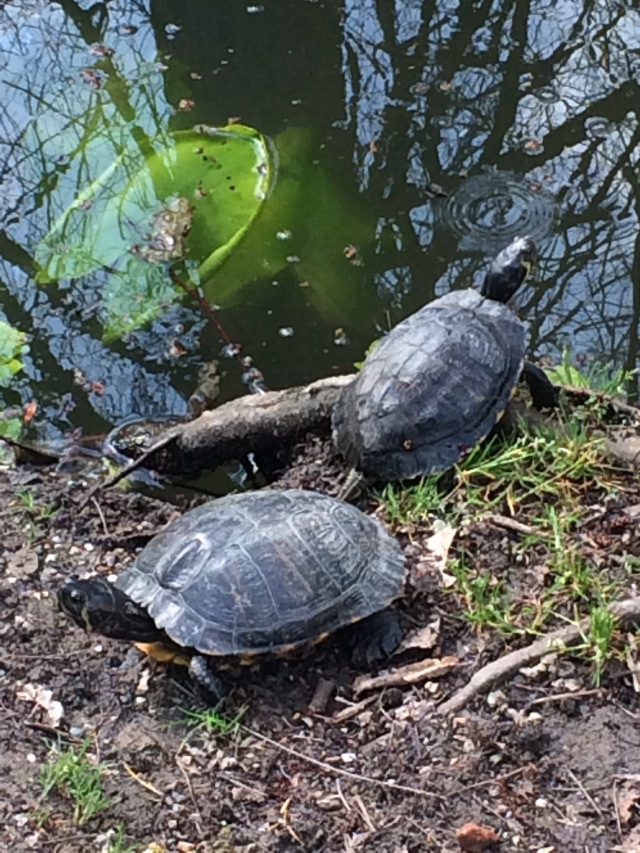 Turtles by the pond, which was allegedly formed when the Devil dragged a vain young Luccan noblewoman down to Hell.

and as we strolled around the ramparts, the turf was full of flowers – an all-too-short breath of spring before returning to traditional English Easter weather…

Turf on the ramparts. 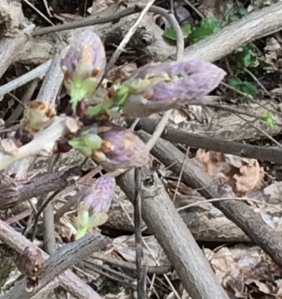 Wisteria floribunda, getting ready to go …

The tiny flowers of Camellia tsaii.

Blossom on a huge specimen of Exochorda grandiflora.

Tulipa agenensis, a new species for me.

Magnolia in the Palazzo Pfanner gardens.