I have mentioned before how the heroic toilers of the Fitzwilliam Museum rotate the displays, especially in the ceramics galleries, on a regular basis, so that one has to keep one’s eye peeled for novelty as one moves through. Last week’s surprise was a number of pieces of British red stoneware, most of them (almost inevitably) from the Glaisher Bequest.

Red stoneware originated in China, and one of the earliest pieces in the Museum appears to be a 1836 donation by Miss Whitehurst, from the Ysing (YiXing) teapot manufactory, and dated to between 1600 and 1799 (its complete absence of decoration presumably makes a more accurate date difficult).

Another Ysing item in the collection is a teapot lid, found in Tooley Street, London, by one G.F. Lawrence of Wandsworth, who gave his collection of pottery fragments to Bernard Rackham (1876–1964), who bequeathed them along with his own collection to the Museum.

Rackham was the younger brother of Arthur, the book illustrator. After obtaining a First in classics at Pembroke College, Cambridge, he entered a competitive examination designed to draw Oxbridge graduates into the museums service, and obtained a post in the ceramics department, of which he later became the head, at the Victoria and Albert Museum. He effectively created the ‘science’ of the study of ceramics, bringing to order the chaotic collections of the V&A and writing many descriptive catalogues, including a two-volume work on the Glaisher collection.

Volume I of the Glaisher catalogue (reissued in 1987). Observant readers will recognise the image …

(The Royal Collection has a presentation copy given to Queen Mary by Sydney Cockerell, then the Museum’s director.) In his spare time, and after retirement, Rackham was also an authority on English stained glass, European glassware and European and Korean ceramics – yet another of those people who makes one feel hopelessly idle and apathetic.

I have had no luck in locating a likely G.F. Lawrence, but I think it’s safe to assume that he was an enthusiast who brought his finds to the V&A for advice: Rackham notes that almost all Lawrence’s finds were made in London ‘outside the city boundary’. Tooley Street is a major road on the south bank of the Thames, running opposite the Tower of London. It takes its name from the (now demolished) local church, St Olave’s (St Olaf, king of Norway), by a faulty separation: St Olave’s > St Toulave’s > St Tooley’s (see also adder, apron and humble pie). It used to be an area of wharves and warehouses, known as ‘London’s Larder’ for its food imports. 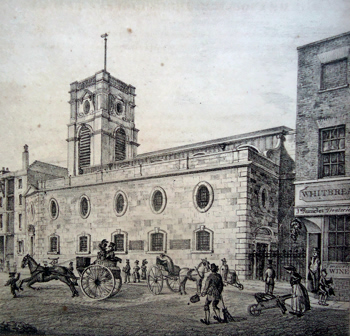 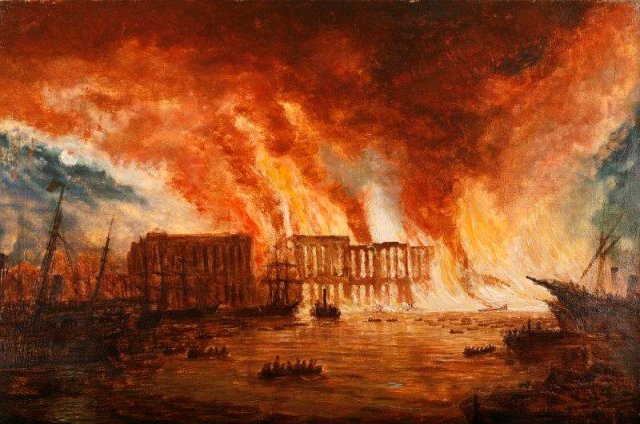 In 1861 the Tooley Street fire destroyed the whole area over two days, and was not finally damped down until two weeks later. This led incidentally to the formation of London’s first publicly funded fire service, after the insurers who had paid for the existing one (whose leader lost his life in the blaze) threatened to disband it.

The memorial on Tooley Street to James Braidwood, head of the then London Fire Brigade, who was killed during the conflagration.

One wonders if Mr Lawrence found his pot lid during the extensive demolition and rebuilding of the area which followed over the next two decades – compare the experience of Charles Roach Smith in the 1850s. (Since then of course there has been a great deal more upheaval, most recently for the rather oddly shaped City Hall.)

It was not long before European potters began to imitate this Chinese ware: here is a Delft example from the late seventeenth century, with a delightful raised motif of cherry blossom.

In Britain, most red stoneware comes from Staffordshire: this punch pot, made about 1760, interestingly has a very similar ‘prunus’ motif on the sides, but the handle and spout are branches.

Dr Glaisher had a similarly decorated coffee pot in his collection..

One of my favourites (not currently on display) is this beautifully shaped lidded jug, with delicate combed decoration. The handle seemed to have been broken and re-attached using metal (lead?)  – the sign of a beloved (if not necessarily very valuable) piece.

However, the object I want to mention particularly is another coffee pot, made in Staffordshire at some time after 30 April 1763 and  probably within the next couple of years, which featured in the 2015 ‘Treasured Possessions‘ exhibition.

The reason that it can be dated with this amount of accuracy is difficult to spot, but on Britannia’s shield on one side of the pot (the other depicts a fairly conventional ‘Chinaman’ with a parasol) is the number ‘45’. This refers not, as one might think, to a resurgence of good old Jacobite sentiment, but quite the reverse: ‘45’ is the serial number of the issue of John Wilkes’s The North Briton, in which he lambasted the King’s Speech of 23 April 1763: a warrant for Wilkes’s arrest for seditious libel was issued on the 30th.

I don’t have the expertise, never mind the time and space, to talk about the life and career of Wilkes (1725-97), licentious hedonist and radical politician, but he was a man who launched a thousand artefacts, frequently with an anti-establishment motif – though this was sometimes fairly obscure, as with the coffee pot. There are dozens of prints of this famously ugly man with a memorable squint (he himself said that it took him half an hour to talk his face away), the most famous being that of William Hogarth, who depicts him as a leering devil, his wig forming horns and the cap of liberty over his head resembling a chamber pot. (Hogarth had been an associate of Wilkes until he attacked him in the North Briton … )

Hogarth’s 16 May 1763 etching of Wilkes, with issue 45 of the North Briton in the background.

The craze for ‘Wilkes and Liberty’ ceramics was fed not only by British kilns, but also by the Chinese export trade: this punch bowl

shows Wilkes confronting Lord Mansfield, the Lord Chief Justice, famous for his decisions against slavery. In the complexities of the Wilkes case, Mansfield was in fact a defender of due process against the government, but he none the less became the target of attacks by Wilkes’ supporters. Remarkably, the bowl was made in Jingdezhen, as was a very similar one exported to America, which reads ‘Arms of Liberty’. (Wilkes was actually opposed to the American Revolution, but again its supporters seemed not to notice.)

A similar bowl, with the inscription ‘Arms of Liberty’, produced in China for the American market. (Credit: the Museum of the American Revolution)

A object with more covert support for Wilkes is another punch bowl, made in Liverpool, which did not reveal its seditious message until its contents had been drunk up. 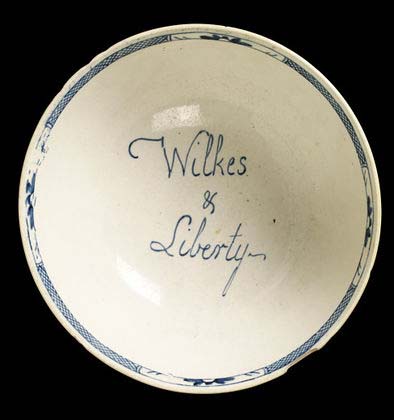 … until the dregs were drunk. (Credit: the Victoria & Albert Museum)

And to show the increasing industrialisation of political comment, how about this teapot, which links Wilkes to Magna Carta?

Wilkes is depicted in author mode one one side of this teapot, flanked by Liberty and Britannia …

… while on the other side he supports a fainting Liberty. The scroll on the ground at his feet reads ‘Magna Charta Bill of Rights’. (Credit: the Victoria & Albert Museum)

It is of Wedgwood creamware (first developed in 1765), with the transfer-printing in black enamel carried out by Sadler and Green at Liverpool, from an engraving by Thomas Billinge (1741-1816), a Liverpool engraver, printer and newspaper publisher. (Given Wedgwood’s eagerness for royal patronage, did he know/care that the ‘blanks’ he sold for finishing elsewhere would be used in this way?) A less contentious earthenware mug showing William Pitt the Elder was produced by the same trio of processes, 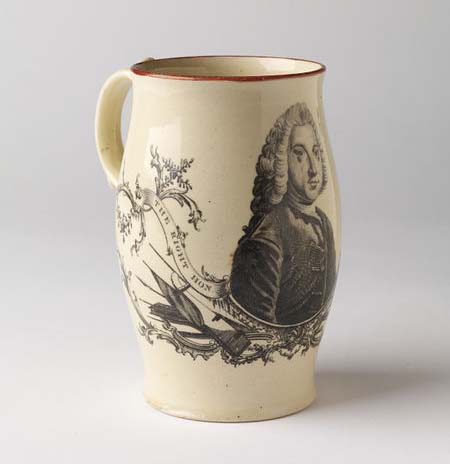 Pitt the Elder, in a mug made c. 1765, again using a Billinge print. (Credit: the Victoria & Albert Museum)

and Sadler and Green also worked with a Billinge image to produce this Worcester mug showing Queen Charlotte.

Queen Charlotte, depicted on a Worcester mug of about 1765. (Credit: the Victoria & Albert Museum)

It is a cheering thought that a nice cup of tea, that great English panacea for all ills (though see here for an interesting eighteenth-century counter-argument) could be used covertly to spread subversion against the Establishment – and equally cheering to see that the tradition continues.

1 Response to Object of the Month: January 2019